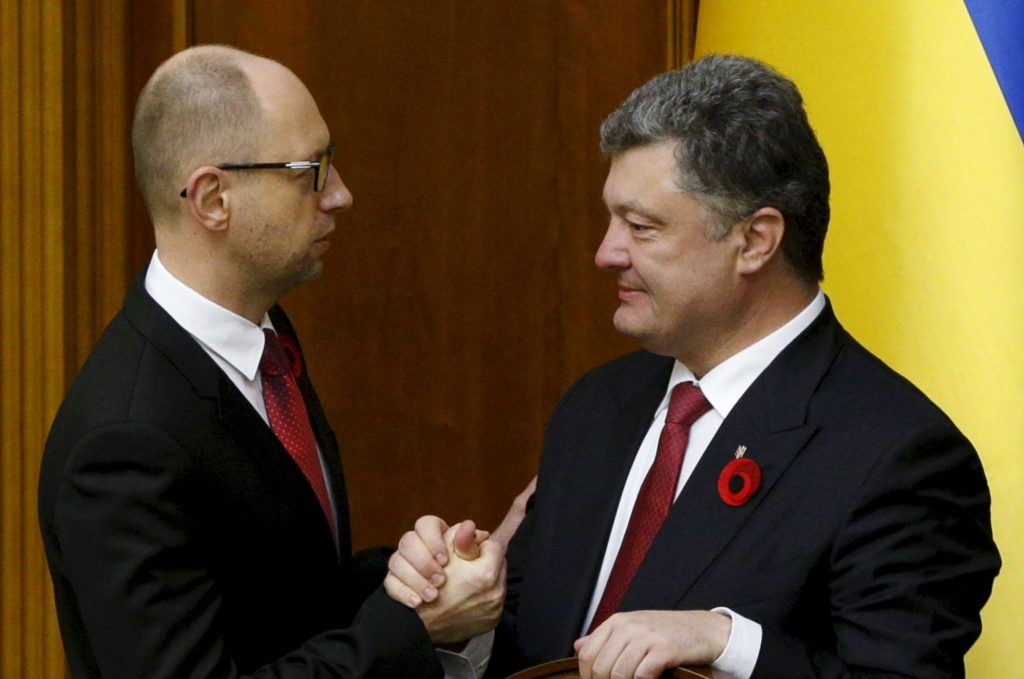 On April 10, Ukraine’s Prime Minister Arseniy Yatsenyuk submitted his resignation, and on April 12 parliament is expected to approve Speaker of Parliament Volodymyr Groisman as prime minister. It is, of course, good that Ukraine’s two-month long government crisis is being resolved, but it is not evident that the new government will be able to unlock the Western financial assistance that has been delayed because of political uncertainty. President Petro Poroshenko is about to take full control of the government, but he is also narrowing his power base.

Poroshenko announced that he would present a new candidate for prime minister on April 12. It will undoubtedly be Groisman, 38, who made his career as two-term mayor in Vinnytsia, Poroshenko’s home town. Groisman is remembered there for his far-reaching local reforms, but most of all he is a Poroshenko loyalist.

Presumably, they have secured the necessary 226 votes for Groisman’s parliamentary confirmation. Yatsenyuk affirmed that his People’s Front with eighty-one votes will support Groisman, and the Poroshenko Bloc has 136 votes. The remaining nine votes can be found in many places. Yatsenyuk will clearly stay active in his party.

Yatsenyuk has been a strong and colorful prime minister with many pluses and minuses. His skill and intellect are undeniable. Virtually all the substantial reforms that Ukraine carried out in 2015 were strongly supported by Yatsenyuk. But he has come to symbolize all of the tough reforms to the populists.

His biggest minuses are that he has been accused of corrupt dealings and lost all popularity. Reformers have complained that he has not carried out more reforms and that he has protected vested interests close to him. While Ukrainian media are cautious in criticizing the President, it has been open season on the prime minister.

With Yatsenyuk, the three leading reformers in his government will leave. Economy Minister Aivaras Abromavicius and Transportation Minister Andriy Pyvovarskiy have effectively already left. Finance Minister Natalie Jaresko has made clear that she does not want to serve under Groisman, who opposed her tax reform. Respected Chairwoman of the National Bank Valeria Hontareva has threatened to resign with Jaresko, although she is a Poroshenko appointee. The two Yatsenyuk loyalists, Interior Minister Arsen Avakov and Justice Minister Pavlo Petrenko, however, will stay.

The one big appointment that Yatsenyuk’s party will get is Andriy Parubiy, who will replace Groisman as speaker of parliament. Parubiy was the commander of the Maidan. Poroshenko Bloc faction leader Yuriy Lutsenko is supposed to become the new prosecutor general, which would be better than the appointment of any of the current deputy prosecutor generals, but Lutsenko lacks the legal training required by current Ukrainian legislation.

According to the grapevine, almost all of the other vacant posts will be filled with Poroshenko loyalists and generally reduce the level of competence. Presidential chief of staff Boris Lozhkin is the chief candidate to become First Deputy Prime Minister, which would consolidate Poroshenko’s control over the government. Former Slovak Finance Minister and Deputy Prime Minister Ivan Miklos had been slated to become finance minister, but he refuses to become a Ukrainian citizen, which precludes him from the post. However, highly-regarded parliamentarian Ivanna Klyumpush has been proposed as deputy prime minister for European integration, but it is unclear whether she will accept.

An advantage with the change of prime minister would be that the steady battle between President and prime minister would cease, but so would the balance of power. Groisman is clearly subordinate to Poroshenko. Yatsenyuk has had a strained relationship with parliament, while Groisman with a softer image has enjoyed a good relationship as speaker. However, it will be difficult for him to manage Yatsenyuk’s party, which might have too little to benefit from this cohabitation and is embittered by how the Poroshenko Bloc treated Yatsenyuk.

The main concern with a Groisman government is that it is likely to be less reformist and competent. It might be unable or unwilling to comply with the conditions of the International Monetary Fund. The Yatsenyuk government had committed itself to raise household gas tariffs by 70 percent on April 1, but current Energy Minister Volodymyr Demchishyn refused to do so and he is a Poroshenko loyalist. Groisman himself led the resistance against the IMF-supported tax reform in late 2015 and early 2016 and delayed the adoption of the budget for 2016, having put himself at odds with the IMF. Moreover, several candidates for senior ministerial posts are identified with financial malfeasance. It does not help that Groisman does not speak any Western languages.

In the short run, Poroshenko has scored a major victory, acquiring nearly full control over the government, but his downside is full responsibility for the government, no longer being able to blame his prime minister. The Financial Times captured the change well: “Petro Poroshenko becomes focus of Ukraine’s disillusion.”