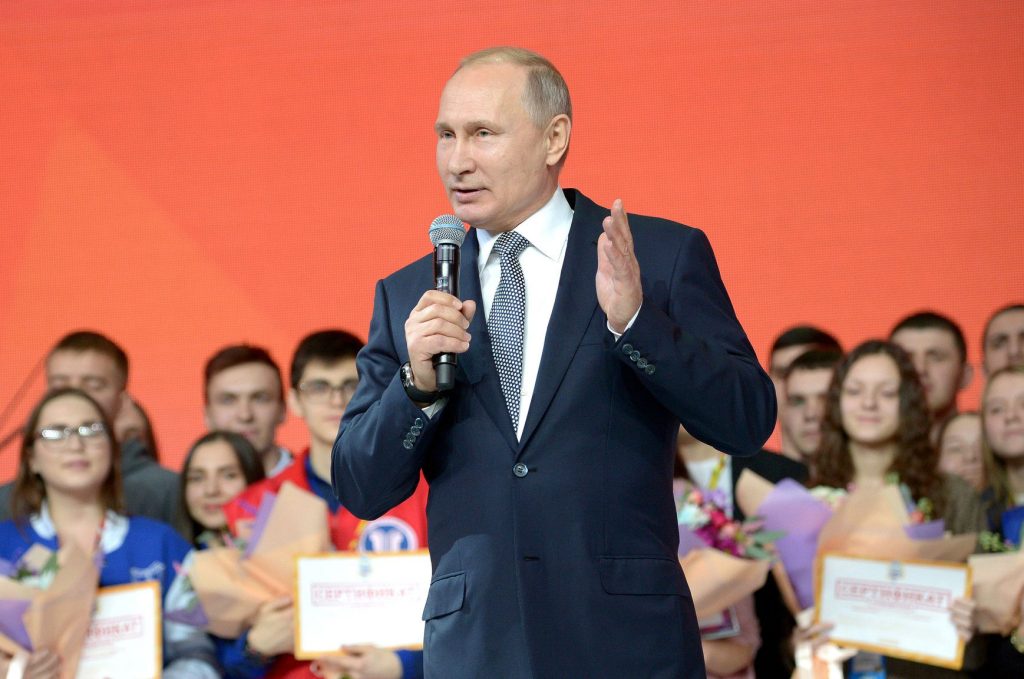 The Russian presidential election will take place on March 18. The outcome of the election is obvious: Vladimir Putin will keep his seat. However, although the name of the president won’t change, the country will.

March 18 won’t just mark the end of the election campaign. It will also launch Putin’s last term, which will expire in 2024. March 19 will be the first of 2,190 days after which a new life will begin in Russia, a life no one knows anything about. Many in Russia have had the sense for a long time that an era is ending. Now we know the exact dates.

At that point, Putin will have four options to choose from.

The first option: if Putin wants to remain in power after the end of the next six-year term—and many in Russia believe that this is what Putin will aspire to—he will have to change the constitution, which prohibits a president from being elected more than two times in a row. Of course, Putin can’t introduce a monarchy and become tsar, but he’ll have to appreciably change the power system. This won’t be easy. It’s not 2008 anymore, when Putin could do whatever he wanted.

The plummeting standard of living, foreign policy failures, centrifugal trends in the regions, abuse of power in the courts and law enforcement—all of these factors detract from the desire of officials and legislators to keep making efforts to continue living the way they have long disliked living. If they did like it in Russia, they wouldn’t be buying up real estate properties and obtaining residence permits in NATO and EU countries, the same ones that Russian propaganda paints as enemies. Sure, their dissatisfaction won’t translate into real political action—for many years now, only weak and inert individuals have been selected for top positions in the country—but they also won’t fight to keep the regime in power longer.

If Putin decides to change the constitution despite all of the difficulties, he will need increased tensions at home and internationally—he will need to explain why the population must rally around him and assign him power for life or indefinitely. In that case, we can expect the Kremlin to step up its fight against “national traitors,” the “fifth column,” and foreign agents; to increase repression against Russian elites; and to continue an aggressive foreign policy course that increases the risks of a major war.

The second option is to appoint an “acting president,” as he did in 2008, when Dmitri Medvedev was a stand-in for four years until Putin returned to power. However, this probably isn’t possible. Putin will be seventy-two in 2024, and seventy-eight in 2030. He is no spring chicken, even compared with the gerontocrats from the Soviet Union’s Politburo. It’s not even as much a matter of his physical fitness as it is of people thinking he’s going too far.

The third option is to allow real elections. However, this would be out of character for Putin, and he would have a lot to answer for. The new regime might choose to launch an investigation into many aspects of the current regime’s activities. Even if Putin himself received reliable guarantees of immunity (although, after what happened with Poland’s Wojciech Jaruzelski and Chile’s Augusto Pinochet, it is doubtful that truly reliable guarantees are possible), there is still his inner circle. No one will promise them immunity, so they will fight to keep the reins of power within their own circle.

Finally, the fourth option for Putin is to find a successor and then use his administrative resources to ensure the successor’s victory in the election. But it is difficult to find the right candidate. It wouldn’t be enough for Putin’s heir apparent to have the confidence of the departing leader; he would also need to become a real president, so he would have to win the approval of the governors, the generals, and the oligarchs. They will be thinking about which candidate can handle the main responsibility of a Russian president: mediating conflicts between various players. Putin’s successor will also need to win at least a third of the vote in the election, if not half; it is no longer possible to fake all of the votes. However, there are few individuals in Putin’s inner circle who have the capacity for open discussions and not just intrigues.

The contest for a favored successor or favored option for changing the constitution will begin on the morning of March 19 (prior to that date, no one is likely to dare bother Putin with such matters). This will result in greater turbulence at the very top and a decline in the loyalty of many elites; inevitably, these dynamics will “trickle down” to society at large.

However, the public won’t sit idly by watching events unfold. For politically active citizens, the president’s likely departure provides not just an opportunity for transformation, but also a boost in the potential rewards of political competition. Actions such as organizing protests or campaigning, which in past years could have landed someone in jail—or, in the best-case scenario, would simply have no benefits except popularity among like-minded people—can now propel one to power. We will see this in three years, at the 2021 State Duma elections, which will be a lot more exciting than the 2016 elections, when the results were known in advance.

For this reason, there will be major reshuffles in the opposition right after March 18. Some political players will try to fortify their positions, boasting of their successes in resisting the regime and the sacrifices that they have made. Some will criticize the Putin-era leaders and structures, put forward new political figures, and create new parties. These processes are essentially already underway. A myriad of those who once preferred to sit back and observe will get into the game, because the rewards will suddenly become real. Hitherto unknown names will soon appear on the lists of Russian opposition leaders.

The new era will also require new people in the administration. Those who can only maintain the equilibrium and faithfully take part in corruption schemes will be pushed out. Those who can respond to the new challenges will strengthen their positions.

These people will take action. We can expect the establishment of new Kremlin-controlled parties and attempts to entice people who have political potential, but at the same time we can also expect more intimidation and repression. There will be a need for new spin doctors. Television won’t improve, but it will change.
And maybe Russia will need a new war. I really hope to be wrong about that one.

It is difficult to predict everything that will happen. It is only clear that in about 50,000 hours, life as the country has known it for more than eighteen years will end.

Leonid Gozman is a Russian politician and president of the all-Russian public movement Union of Right Forces.