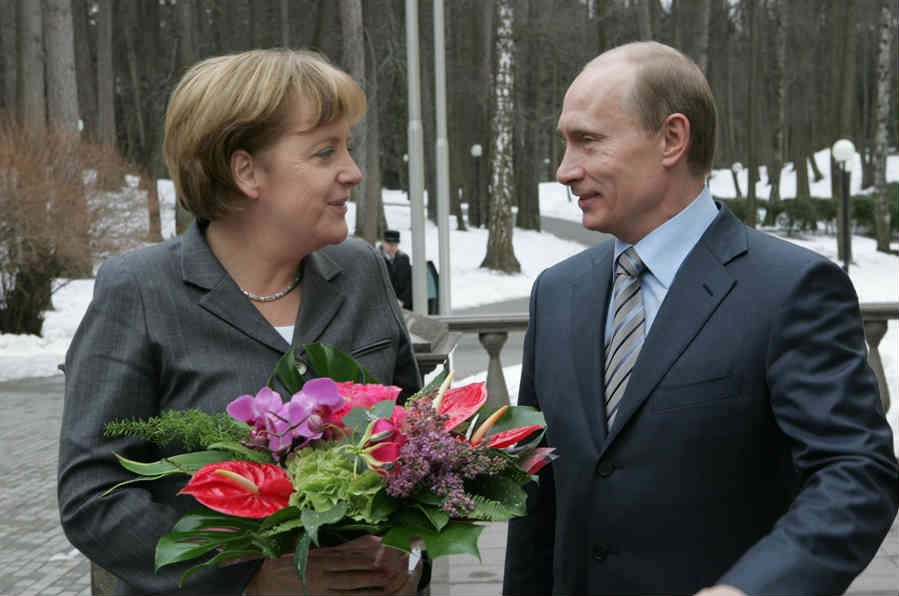 Russian President Vladimir Putin on May 10 once again justified the Molotov-Ribbentrop Pact as a statesmanlike act of defending Russia’s national interests. This time Putin did so with German Chancellor Angela Merkel next to him. The Molotov-Ribbentrop Pact—the 1939 deal that split Eastern Europe between the Soviet Union and Nazi Germany—was a death warrant for millions of Poles, Jews, and other East Europeans and paved the way for World War II. From his repeated justifications of the pact, one can derive six important insights into the mentality and objectives of Putin and Russia’s elite.

First, Russian diplomacy has long sought a partnership with a major power, often Germany, to define the European status quo. Each has a distinct sphere of influence. This desire confirms just how deep-rooted the idea of partnership with Germany is among Russian policymakers, and it confirms the depth of Russia’s belief in a bipolar world. When Russia was prostrate twenty-five years ago, Russian analysts described Europe as a bipolar system in which the United States dominated NATO and the European Union, while Russia should control Eurasia. Given Putin and his entourage’s hostility to Western governance, it should come as no surprise that he believes the major powers should exercise untrammeled control in their spheres of influence.

Second, Putin refuses to acknowledge that the pact resulted in the death of millions of Poles, Jews, and other East Europeans. As Yale historian Timothy Snyder notes in Bloodlands, both sides knew the pact would lead to a war from which they both hoped to profit and these civilians would be left to their fate. While Germany has visibly repented for its crimes, Russia cannot bring itself to talk honestly about Stalinism. As long as Russia refuses to reckon with its past, it will turn a blind eye to these crimes since the descendants and students of their perpetrators are still in power and think like their predecessors and teachers.

Third, the ongoing justifications of this criminal pact validate other states’ fears that for Putin and his government Russian interests are superior to those of everyone else and Russia is not accountable to anyone. Russia aspires to present itself as an independent sovereign state, duplicating the nature of its domestic autocracy.

Fourth, by praising the pact in front of Merkel, Putin and his government believe they can belittle, intimidate, and even kill anyone who obstructs them with impunity. Quite simply, they do not care what the world thinks. This behavior is a classic manifestation of overcompensation; Russia is deeply insecure and sensitive to what the West thinks. This is a repeated theme in Russian history, and it’s still true today. Putin’s defense of the pact also represents a deliberate insult to Merkel, one she undoubtedly did not miss. And it’s another sign of Russian arrogance given Merkel’s clear preeminence in Europe today.

Fifth, the sovereignty and independence of former Soviet republics and eastern bloc countries are disposable, contingent, and merely a matter of expedience for Putin and his cronies. The treaties guaranteeing their sovereignty and territorial integrity are merely scraps of paper in Russia’s eyes, to be revised when the opportunity arises. Naturally this belief extends to a long historical chain of Russian behavior and is one more compelling reason why governments from the Baltic to the Black Seas have never trusted Moscow and are thoroughly alarmed by Russia’s annexation of Crimea and aggression in eastern Ukraine.

Lastly, Putin’s outlook on world affairs, like the outlook represented in this pact, shows that the conflict over values between Moscow and the West is irreconcilable as long as Putinism reigns in Moscow. Tactical accords are always possible—Moscow welcomes them for they supposedly weaken Western unity and will—but genuine cooperation, not to mention integration, are inconceivable and to be avoided at all costs. European integration under democratic auspices is the greatest geopolitical threat confronting Russia and one that must be reversed or at least arrested. Moscow’s pre-Bismarckian concept of international relations is that everyone acts like Stalin and Hitler. In fact, Russian historians talk of the “good Hitler” up to the point that he invaded Poland in 1939.

Putin’s cynicism, great power chauvinism, and insistence on a free hand along with the celebration of force and readiness to harm anyone who obstructs him continues the Leninist-Stalinist tradition in Russian statecraft.

Moscow’s contempt for Europe’s smaller states and neo-imperial revisionism to demonstrate its power and retain the capacity to coerce them also shows that imperialism and war are genetically encoded in the DNA of this regime. These are the lessons we can derive from Putin’s celebration of Stalinism, and we ignore them at our peril.