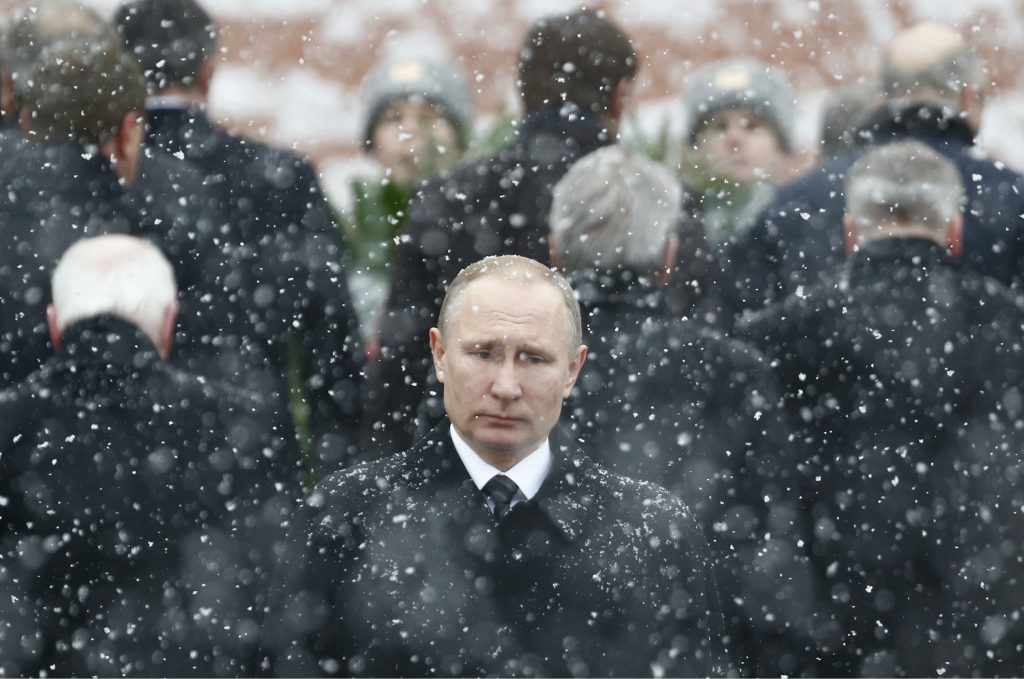 April will mark the third anniversary of Russia’s hybrid war in eastern Ukraine, with no end in sight to a tragedy that has already claimed over 10,000 Ukrainian lives. The conflict has devastated and transformed Ukraine in ways that will not be fully apparent for decades. Crucially, it has also brought little of value to the Russian Federation, while leaving a trail of self-inflicted wounds. Russian President Vladimir Putin’s secret war has mauled the Russian economy, isolated Russia internationally, reinvigorated the NATO alliance, and plunged the Kremlin into an escalating confrontation with the West that it cannot realistically expect to win.

Nevertheless, there is little sign of Moscow seeking a face-saving exit. On the contrary, the Kremlin recently signaled its refusal to back down by announcing its decision to recognize passports issued by its separatist proxies. Why is the Russian leader so ready to accept the spiraling costs of his disastrous Ukraine policy?

At first glance, Putin’s dogged determination seems to defy all logic. After all, Russia’s attempt to partition Ukraine has clearly fallen short. This much was already obvious by the summer of 2014, when the popular uprisings in support of Russian intervention that were anticipated by the Kremlin failed to materialize across eastern and southern Ukraine. Faced by a citizen army of Ukrainian volunteers and a population suddenly united by a shared opposition to Kremlin aggression, Putin’s hybrid invasion plans soon began to unravel. In the end, only a large-scale intervention by the Russian army prevented a complete rout and allowed Moscow to maintain a foothold in the Donbas. This led to the first Minsk peace accords of September 2014.

At that point, some expected Putin to begin negotiating his way toward an honorable settlement. He has done nothing of the sort. Instead, Russia has kept the conflict smoldering along, presumably in the hope that the West will eventually lose interest or Ukraine itself will collapse under the weight of its own internal divisions. Neither of these prospects has materialized. The Euro-Atlantic sanctions regime has proved surprisingly durable, while Ukraine has remained remarkably steadfast in its resolution to confront Russia despite all manner of political chaos and continued corruption in Kyiv.

Even geopolitical earthquakes like the UK’s Brexit vote and the election of Donald Trump in the United States have failed to change the overall picture, leaving the Kremlin still in search of a breakthrough. The absence of any obvious weakening in Western resolve should have created fertile ground for a diplomatic solution, but the situation in occupied eastern Ukraine appears to be moving in the opposite direction. A frozen conflict now looks to be the most likely future scenario, leaving Russia and the Western world trapped in a long-term confrontation, with Ukraine caught in the middle.

In reality, Putin probably has far less room to maneuver than many observers might imagine. He is currently riding the tiger of Russian imperialism and knows only too well what might happen if he attempts to cage the beast. Ordinary Russians have so far proved broadly accepting of the hardships imposed over the last three years, but this has only been possible thanks to regular doses of jingoism. There are already signs that the euphoria generated by the seizure of Crimea is wearing off. A subsequent retreat from eastern Ukraine as mandated by the Minsk Accords might spark a nationalistic backlash that could bring down the regime.

There are also practical concerns to consider. An end to the occupation of the Donbas would open up the region to Ukrainian authorities, aid agencies, and the international media. They would encounter a landscape littered with evidence of Russian war crimes and a population that would at least in part be ready to demonstrate its renewed loyalty to Ukraine by recounting the realities of the occupation. Kremlin denials of direct involvement in eastern Ukraine have long since earned the contempt of the international community, but this would be an entirely different matter altogether, with the devastation, torture chambers, and mass graves of Putin’s secret war laid bare for all the world to see.

Even if these thorny issues could somehow be resolved, it would not be enough to end the war. Ultimately, Putin’s refusal to compromise over Ukraine is rooted in his rejection of the post-1991 status quo and his fear of a genuinely independent Ukraine. For Putin, as for a great many Russians, Ukraine is not really a separate country. He has repeatedly stated his belief that Ukrainians and Russians are “one people,” by which he means that Ukrainians are a component part of a larger, Moscow-led Russian world. It is therefore entirely logical for Kremlin policymakers to view a democratic and European Ukraine with undisguised dread. If Ukraine’s revolution succeeds, it is only a matter of time before a similar uprising takes place in Russia. The Kremlin has always maintained that European-style representative democracy is alien to the Russian people. The emergence of a democratic and prosperous Ukraine would invalidate this argument. Democracy would have decisively bridged the continent’s last great civilizational divide, leaving the Kremlin with no more excuses.

Putin understands the implications of a Ukrainian success story. He must also appreciate that he is now the prisoner of a hybrid war he initiated but can no longer win. Instead, he must wage a war of attrition in which everybody loses. Russia will lurch further into authoritarian isolation while seeking to undermine Western institutions and keep Ukraine as unstable as possible.

The only way the region can break out of this grim predicament is if the West dramatically increases its financial, diplomatic, and military support for Ukraine. Putin is not a rational partner seeking a negotiated settlement. He is a zero-sum dictator trapped in a downward spiral of hybrid hostilities whose future survival depends on the failure of his enemies. Unless he finds himself confronted by the overwhelming might of the democratic world, he will continue the current conflict until his dying day. Direct military confrontation with Russia remains unthinkable, but Western leaders must understand that until they show the necessary collective resolve, their Putin problem is here to stay.

Image: Russian President Vladimir Putin attends a wreath laying ceremony to mark the Defender of the Fatherland Day at the Tomb of the Unknown Soldier by the Kremlin wall in central Moscow, Russia February 23, 2017. REUTERS/Sergei Karpukhin