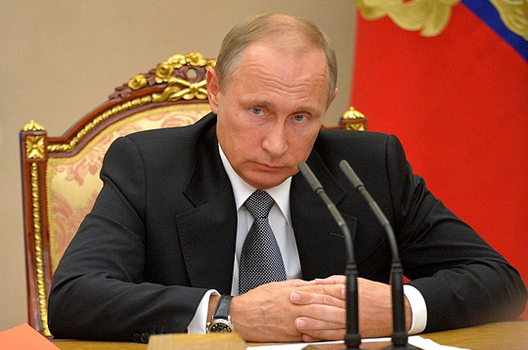 The minority of Russians who have not been zombified by official propaganda and who still have any clue about what is really going on in the world—rather than just on television—already know Russia is hurtling toward full-blown catastrophe, though the details might be up for debate. Will the collapse come next month, or more like 2024? How will it happen? A coup d’état by radical fascists, or a provincial revolt whose instigators first see Russian President Vladimir Putin as their savior but later turn against him? Or perhaps year after year of economic stagnation, resulting in complete disintegration. History shows that authoritarian systems can change without bloodshed, but only if a regime’s key players help the forces seeking to replace that regime. This is a prerequisite for non-violent reform or the transfer of power to a reformer.

Yet readiness to get involved is not synonymous with desire to get involved. Neither Poland’s last communist leader, Wojciech Jaruzelski, nor Chilean dictator Augusto Pinochet was particularly eager to give up power. Readiness is predicated upon an understanding that the existing course is unworkable, destructive for the country, or simply suicidal. Russian Emperor Alexander II was asked at his father’s funeral whether he really intended to emancipate the serfs. His response was: “It is better to abolish serfdom from above than to wait for the time when it will begin to abolish itself from below.” Alexander II understood that he was not choosing between a more or a less effective system, or between a more or a less morally justified system. He was choosing between reform and rebellion.

It is unclear whether Russia’s current leadership appreciates the need for change. Unfortunately, Putin and his entourage believe it is sufficient for them to wait by the proverbial river for the bodies of their enemies to float by. Even if—when the TV cameras are off—they realize how far they have gone, it’s not enough. The real question is, how much freedom do they have to act?

On one hand, with his high approval rating and tight state control over Russian TV, Putin can do pretty much anything he wants. He could announce tomorrow that the United States is a friend, and China or Djibouti the enemy. The population—which supports Putin not thanks to his long-gone charisma but because of his harsh rhetoric and the illusion of superpower status it creates—would go along, provided it still gets to have some sort of an enemy. After all, Russia has a lengthy history of rancor against all sorts of groups and nations, not only the West. Any one of them will do as a target of hatred if the people need to rally around their leader. At the same time, certain intrinsic limitations exist. Putin really believes his own statements about the entire world’s hostility to Russia and its desire to conquer and dismember his country. This makes it difficult for him to change his political course.

Furthermore, there is no exit from the dead end into which Putin has maneuvered himself and the Russian people. The Ukrainian debacle was supposed to end in a tangible triumph, something along the lines of the flag-raising over the Reichstag that came to symbolize the Soviet victory in World War II. Without a visible conquest, the Kremlin would not withstand disappointment. Nothing would distract attention from evidence of corruption and other transgressions, and top officials could find their liberty or even life at stake, not just their clout.

Putin could have declared a complete and decisive victory after annexing Crimea. But he trusted his experts—whose competence has been declining steadily and predictably—when they said Ukraine did not have a military force and wouldn’t form one in time; that the people of the Donbas would welcome Russia as their liberator; that Ukraine would collapse; and that the West would acquiesce. They were wrong on all counts. Now there is no victory and no flag. What are Putin’s options now? Either overthrow Ukrainian President Petro Poroshenko and Prime Minister Arseniy Yatsenyuk (and it wouldn’t matter who replaces them), or defeat Ukraine on the battlefield. Yet no matter how difficult things have been for Kyiv, the situation remains stable and even a series of “humiliating defeats” have not provoked a new Euromaidan. Forging a land corridor to Crimea would be an obvious military victory, but that would lead to harsher sanctions, if not war, with the West. Perhaps Putin regrets that he didn’t stop after seizing Crimea, but now it’s too late.

The world no longer trusts him. Of course, if he changed his rhetoric—and, better yet, his actions—things would appear to improve, but the trust is gone. This means the latest arms race will continue. Not only would that bankrupt Russia—like the Soviet Union before it. Even worse, combined with the Kremlin’s outdated and aggressive worldview, it would increase the risk of war. Russian fighter jets are increasingly getting dangerously close to NATO airspace; sooner or later, a NATO air defense duty officer will push the button. If this is even half true, it’s clear that Putin is leading Russia to certain ruin, that he can’t or won’t change his political views, and that major world powers do not see him as a reliable partner. His departure is a necessary—though not sufficient—condition to prevent national or even global catastrophe.

Recognizing this doesn’t mean Russians should give up all civil, political, or even professional activity, much the same way that accepting the inevitability of death does not mean we should all stop brushing our teeth. Teachers must teach, doctors must heal, and construction workers must build under any regime. Lost children must be found, plays must be staged, and books must be written. It is also wrong to stop political activity. Elections might not replace those in charge, but the electoral process itself promotes civil society and enlightenment in its broadest sense.

A lot of people keep repeating “this can’t go on much longer” as if it were a mantra. Why can’t it? First of all, the concept of “much longer” in the context of history can last far beyond the span of a human life. Second, a regime won’t collapse or step aside simply because of oil prices, national isolation, or even depletion of financial resources. What matters is the contrast between expectations and reality. After the ruble lost nearly half its value in late 2014, prices went up, but they didn’t double, and there were no stampedes at stores. Since these were the expected consequences of devaluation, everyone was relieved when they didn’t happen. As a result, no one took umbrage with the government. In fact, most Russians don’t even think they have a choice; the Kremlin’s spin doctors are very good at their jobs. Finally, those who really can’t stand living in Russia can leave. In the medium term, this also serves to strengthen the regime.

A lot of people also reason that if Putin left, things would get even worse. In fact, anyone who could overthrow Putin would need just as much popular support as a legally elected political candidate; for now, a national socialist has a much better chance at a “mandate” than a democrat. Since the regime steamrolls all remaining civil institutions, the longer it maintains power, the more dangerous and lasting a potential fascist regime is likely to be. Acknowledging the urgency of Putin’s earliest possible departure isn’t the same as refusing to recognize his achievements. We’re not talking about the past but the future, which appears quite perilous under Putin.

So what can be done? Putin won’t lose an election, and Russia has already tried a revolution; we’ve yet to recover from it almost a century later. Certain steps, however, seem self-evident.

First, all those who are unhappy with Russia’s current trajectory must band together and openly call for Putin’s exit. We must explain the necessity of his departure to the Russian people, and it is not enough to do so through democratic outlets, whose audience already understands everything. We must talk to those who disagree with us. A dictator does not keep his throne for long if most of his subjects demand his ouster. We also should not overestimate Putin’s support: despite his notorious 89 percent approval rating, the Kremlin resorts to paying employees of state-owned entities to attend rallies on its behalf. Furthermore, even the 89 percent understand full well the extent of corruption in Russia and the ramifications of Putin’s paternalism. Despite all my criticism of Putin on national TV, I have never been the target of enmity in the streets.

Second, Russia must guarantee immunity for Putin, his family, and his closest associates. Whether or not the president committed the violations he is accused of, a peaceful transition is in everyone’s interest. We can only achieve that if the head of state is not driven into a corner. The examples of Jaruzelski and Pinochet are unfortunate, since they were also promised immunity. That makes the task even more complex. We must come up with adequate guarantees—perhaps international ones—that can be trusted despite these precedents.

Third, we must prepare for life after Putin by developing social, economic, and political reforms. If the TV madness gets worse and the government sticks with its education and cultural policies, our compatriots will believe that the Earth rests on three whales; many already do. A nation with this worldview will not return to a healthy path of development. Separately, we must prepare thousands of brave, bright men and women to take charge of the country. Since mainstream colleges are spending less effort on that, we need to find other ways.

Fourth, we must support everything that generates demand for democracy: civil institutions and political structures that help citizens feel connected with the fate of their country, as well as advanced technologies that keep Russians up to date with world trends.

Finally, we must resist the lies and hypocrisy that exceed even the Soviet era. The tragedy of the fable about the emperor with no clothes was not that people saw the truth but were afraid to express themselves. Rather, those people really saw their ruler’s new clothes. Someone must voice the truth so it becomes obvious to others. A long time ago, this was what Soviet dissidents did. Today, it is not nearly as dangerous and requires no particular bravery. However, it is important for the millions of people who understand everything, but exist in an information vacuum, to know that not everyone has given up, not everyone is scared, and not everyone has left the country—that there is still a chance to survive until things change.

Leonid Gozman helped lead the party Just Cause from 2008 to 2011. Gozman lives in Moscow. Vedomosti first published this piece in Russian.

Image: Russian President Vladimir Putin addresses government officials at an August 27 meeting in Moscow. Leonid Gozman, who led the Just Cause party from 2008 to 2011, argues that Russians must begin preparing for life after Putin. Photo credit: kremlin.ru