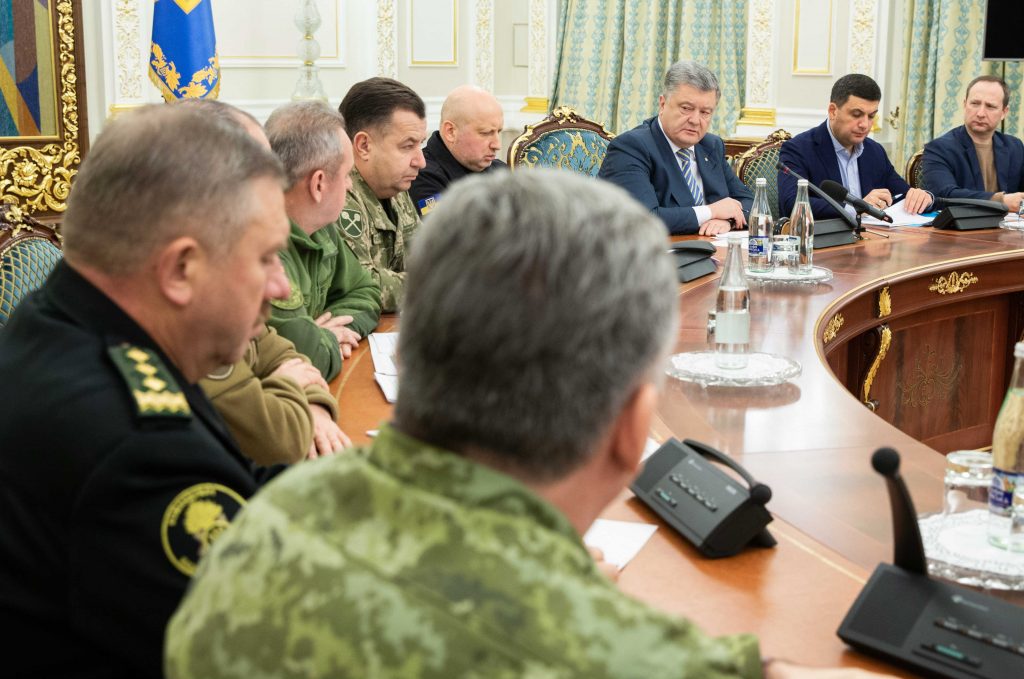 On November 25, Russia fired on the Ukrainian Navy in the Black Sea, injuring at least two Ukrainian sailors. Many experts have warned that Russia is opening a new front in its forgotten war in Ukraine on the Black and Azov Seas, illegally boarding commercial Ukrainian vessels and increasing its military presence to about 120 patrol boats and ships. The Russian MFA twitter feed is full of insinuations about a Ukrainian provocation.

We asked Atlantic Council experts and friends the following: How should Ukraine respond? How should NATO and the West react to this latest round of Russian aggression? What would it take to force the Kremlin to stop its menacing actions in Ukraine and around the world?

Anders Åslund, Senior Fellow at the Atlantic Council: Ukraine is protesting as it should, but so far I have only heard protests from Estonia and Latvia. The United States, NATO, the European Union, and all major Western countries should protest sharply against this violation of the freedom of the sea under several international sea conventions. NATO and the United States should send naval ships into the Black Sea into the neighborhood of the Sea of Azov to guarantee that it stays open to international shipping. This would be in full compliance with the UN Law of the Sea Convention of 1982 and the Montreux Convention on the regime of the straits of 1936.

Taras Berezovets, TV Host of Телеканал Прямий, Founder of Ukrainian Institute of the Future, and Founder and CEO of Free Crimea: I believe this is a moment of truth for the West. It’s the first time that the Russian military has attacked Ukrainian armed forces under Russian flags. It’s not little green men anymore. It’s an open act of aggression. So the response of Ukraine and Western allies to this clear and present danger should be resolute. If Russia is not deterred in the Azov Sea, we might see very soon open Russian aggression in the Donbas. The West should shut down SWIFT, slap on oil embargoes against the Russian Federation, and enlarge military assistance to Ukraine. The US should sanction Nord Stream 2. NATO should increase its military presence in the Black Sea to send a message to Russian President Vladimir Putin. Ukraine should declare martial law, impose visa regime, and break the 2003 Azov Sea Treaty.

Ian Brzezinski, Senior Fellow at the Atlantic Council’s Scowcroft Center on International Security (from Twitter): This is not a provocation but military aggression by Russia against Ukraine. Putin is testing the West’s resolve. The West’s response should include sectoral economic sanctions and transfer of more lethal assistance to Ukraine, including anti-ship missiles.

Michael Carpenter, former US Deputy Assistant Secretary of Defense, Senior Director at the Biden Center, and Nonresident Senior Fellow at the Atlantic Council: Russia’s seizure of Ukrainian ships transiting the Kerch Strait between the Black and Azov Seas is a part of a larger Russian strategy to gain control over the Azov Sea and blockade Ukrainian maritime traffic in and out of the Kerch Strait. This move is clearly a violation of international law and adds a new dimension to Russia’s four-and-a-half-year-old war against Ukraine.

The United States should respond immediately by giving Ukraine radars to boost its maritime domain awareness and land-based anti-ship missiles so it can defend its Azov Sea littoral. The United States should also impose a complete asset freeze on at least one major Russian bank, such as Sberbank, VTB, or Gazprombank. The sanctioning of a Russian bank—or several banks if Russia fails to respond initially—should be made conditional on Russia restoring Ukraine’s access to its own ports and withdrawing its troops from the Donbas. Until this happens, the costs on the Kremlin should continue to mount.

Peter Dickinson, Nonresident Fellow at the Atlantic Council and Publisher, Business Ukraine Magazine: This naval attack is an act of war under virtually any interpretation of international law. At its heart lies the Kremlin’s claim to Crimea, which remains unrecognized outside of Russia itself. The international community must learn the lessons of 2014 and prevent Moscow from closing the Kerch Strait and creating new military realities on the ground. The most effective way of doing this would be to send a multinational naval task force to pass through the Kerch Strait without delay and dock at Mariupol. This would test Moscow’s resolve and expose the limitations of Russian bullying. Failure to do this will lead to the long-term blockade of Ukraine’s southeastern seaboard and mounting Russian efforts to disrupt shipping to the Odesa region, bringing the world significantly closer to a major conflict escalation. One thing is certain, the time for expressions of grave concern is long over.

John Herbst, Director of the Eurasia Center and former US Ambassador to Ukraine: If the West does not react—and if Western media facilitate this by focusing on sideshows like “Martial Law”—then Putin will have won another gamble.

Adrian Karatnycky, Senior Fellow at the Atlantic Council’s Eurasia Center and Managing Partner of Myrmidon Group LLC: Ukraine has been facing sustained Russian funded subversion from within and clandestine Russian military operations for the last five years. Now it is facing open aggression from without. Ukraine needs to be at the highest footing of military preparedness and internal vigilance, while maintaining the widest scope for civic and political liberties.

NATO, the United States, and the West should respond with a ratcheting up of sanctions, creating a much larger naval presence in the Black Sea, and increasing lethal military assistance to Ukraine. Increased sanctions are also called for and if Russia persists in its military aggression, the expulsion of Russia from the SWIFT banking system should be implemented.

Phillip A. Karber, President of the Potomac Foundation: By any standard of international behavior—invasion and occupation of sovereign territory, attack on peaceful shipping, high levels of violence, and repeated violation of international law—Russia is waging war on Ukraine.

Ukraine has been under daily attack for almost five years—longer than America was in World War II. How much longer can Ukrainians hold the line alone, and what are the consequences for Europe and the United States when they can’t?

Its time to spell it like it smells—its war!  Russia has not been stopped by sanctions, platitudes or the Minsk II ceasefire. Like bullies everywhere they only understand force. The issue is not about “declarations” but decisive action:

Maksym Khylko, Chairman of the Board at the East European Security Research Initiative Foundation and Senior Research Fellow at the Taras Shevchenko National University of Kyiv: First, the Russian attack against Ukrainian naval ships should be recognized at the international level as an act of aggression against Ukraine with all of the following international legal implications. Second, a set of further sanctions should be imposed on Russia to punish it for the escalation of aggression. Third, with the assistance of its Western partners, Ukraine should multiply its efforts to strengthen the defense of the Azov Sea coast. At the same time, NATO should increase its military presence in the Black Sea. Fourth, the West should consider a set of measures to help Ukraine compensate economic losses caused by Russia’s illegal shipping restrictions in the Azov Sea. Fifth, it’s high time for Kyiv to seriously consider the termination of the Ukraine-Russia Treaty on Cooperation in the Use of the Sea of Azov and the Kerch Strait of 2003, and of diplomatic relations with Russia.

Volodymyr Ogrysko, former Minister for Foreign Affairs of Ukraine and CEO of the Center for Russian Studies in Kyiv: Russia has opened a hot new front against Ukraine, this time in the Black Sea region.

In my view, the first reaction of Ukrainian government is adequate. Ukrainian troops have been brought to full combat readiness. The Verkhova Rada will introduce martial law that should cover the whole territory of Ukraine.

We in Ukraine should consider very tough bilateral measures, including breaking diplomatic relations with Russia, stopping trans-border movement for individuals, and imposing a visa regime as well as a total trade embargo for all Russian goods. And of course, any pro-Russian fifth columns should be blocked in Ukraine.

What should our Western partners do?

First, realize that Russian aggression is not only against Ukraine. It is also against the West.

Second, stop delivering statements like “we are concerned.” This time is over. It’s time to react.

The West should react in three ways:

Only by combining our efforts can we stop the Russian aggressor.

Steven Pifer, William J. Perry fellow at Stanford and nonresident senior fellow at the Brookings Institution: The November 25 incidents in the Kerch Strait and Russia’s closure of the strait suggest that Moscow is opening a new phase in its conflict against Ukraine. That blockade halts shipping to the Ukrainian ports of Mariupol, Berdyansk and others on the Sea of Azov that are important trade outlets for eastern Ukraine. That will increase economic pressure on Kyiv in the run-up to the March presidential election.

Russia’s blockade of the Kerch Strait is illegal under international law. The United States and Europe should make clear their readiness to impose new sanctions on Russia if the strait is not reopened immediately. Those sanctions should include measures to target exports and imports through Russian ports on the Sea of Azov and Black Sea, e.g., by banning US- and EU member state-flagged ships from calling on those ports and by not allowing ships that originate at those Russian ports to enter U.S. or European harbors.

Anders Fogh Rasmussen, CEO of Rasmussen Global, Founder of Alliance of Democracies, former NATO Secretary General, and Prime Minister of Denmark (from Twitter): Russia’s aggression in the Sea of Azov must stop immediately: after ramming a Ukrainian ship, they have now opened fire. Moscow’s illegal actions must be met with a robust international response. Putin responds only to power.

Alexander Vershbow, Distinguished Fellow at the Atlantic Council’s Brent Scowcroft Center on International Security:  Russia’s illegal blockade of the Kerch Strait and its violent seizure of Ukrainian ships are clear violations of international law and bilateral Ukrainian-Russian agreements.  These actions can only be seen as premeditated acts of aggression aimed at destabilizing Ukraine in the run-up to Ukraine’s 2019 elections.

Russia has been intensifying the pressure on Ukraine over the past three to four months in small steps, similar to what we saw in Russia’s creeping aggression against Georgia in the spring and summer of 2008.  Moscow seems determined to show that Ukraine is a failed state that cannot defend its own borders in the hope of bringing more malleable leaders to power in Kyiv and reversing Ukraine’s rapprochement with the EU and NATO.

Ukraine needs to show restraint in the zone of conflict and resist overreacting to further Russian provocations.  At the same time, Kyiv should press its American and EU partners not just to condemn Russia’s aggression, but to impose real costs on Russia if it doesn’t reverse course and restore full and unhindered access to the Azov Sea for Ukrainian commercial ships and naval vessels.

The United States and European Union need to impose much stronger economic sanctions on Russia, beginning with the suspension or cancellation of the Nordstream 2 pipeline, which would inflict serious damage on the Ukrainian economy while increasing European dependence on Russian gas. The United States and its allies should also expand NATO’s naval presence in the Black Sea and consider increased support to the Ukrainian Navy.

If the latest attacks and illegal seizure of Ukrainian ships bring little more than a slap on the wrist, Putin will see this as a green light for further escalation, to include a full blockade or even the illegal annexation of the Azov Sea.

President Trump has promised to be tougher than his predecessor, who allegedly “let Russia take Crimea.”  Will Trump now let Russia take the Azov Sea as well?