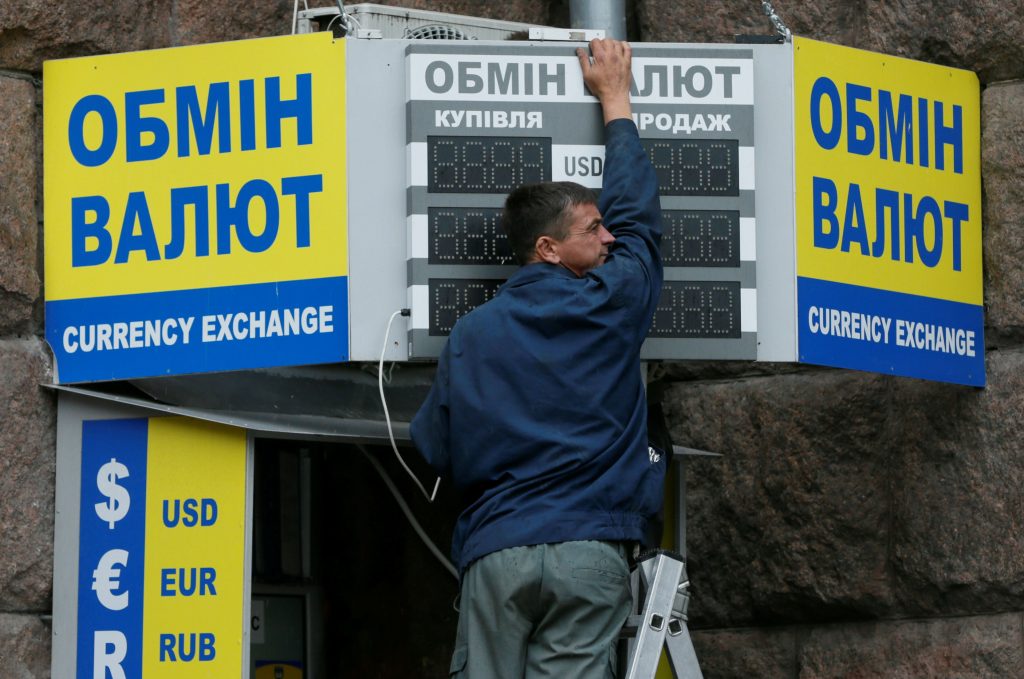 Central bankers and economists are sounding the alarm in Kyiv, Ukraine. The Finance Ministry’s account balance has fallen to its lowest level in four years. The hryvnia is falling fast now, and fell nearly 4 percent over the last three weeks. Eurobond sales and foreign aid could remedy the cash-flow problem, but the International Monetary Fund’s next disbursement has been delayed for more than a year over foot dragging on reforms. Acting Finance Minister Oksana Markarova says that a deal is very close, but there are still differences to be worked out before the IMF releases the next $1.9 billion tranche.

We asked UkraineAlert experts and friends the following: Will Ukraine face a serious financial crisis if it does not get any IMF money before November?

Timothy Ash, Senior Emerging Markets Sovereign Strategist for Bluebay Asset Management Company: It is not inconceivable that Ukraine could survive through to elections, but policy makers would be taking a huge gamble by doing this, and I don’t think that is a risk worth taking. The Ministry of Finance’s cash balance is down to the lowest level since pre-Euromaidan; they are living hand to mouth. They have left themselves dependent on the cash budget position improving plus markets remaining open for them. They face a weight of debt service which without IMF financing, and if markets remain closed, will end up putting downward pressure on foreign-exchange reserves. The NBU has built foreign-exchange reserves to just below $18 billion, which seems a lot, but seasonals now move against the hryvnia, while Ukrainians always buy foreign currency in the run up to elections. If reserves begin to drop, then this might turn vicious and self-fulfilling. Why would you take that chance? Why you would risk pension payments by not hiking gas prices when 6.5 million households are covered by subsidies?

Anders Åslund, Senior Fellow at the Atlantic Council and Adjunct Professor at Georgetown University: Yes, the likelihood of a serious financial crisis is great. The first weakness is the Finance Ministry’s cash reserves that are almost finished. The Ministry wisely sells short-term domestic dollar bonds at yields below 6 percent, but the volume might be too small. The alternative is sequester, which has been common in Ukraine. Another fear is that the hryvnia will slump. It has already fallen 4 percent in a week, while the Turkish lira has plunged 30 percent in four months. The fear is that the Ukrainian hryvnia will follow the Turkish lira down. The third and main concern is that Ukraine’s international currency reserves will run too low. They are currently $17.7 billion, which suffices for 3.2 months of imports. Usually three months of imports is seen as the sheer minimum, and Ukraine has substantial foreign debt repayments coming up. The Ukrainian government can get out of this bind by raising gas prices for consumers as much as the IMF demands right now. Then, Ukraine could get $1.9 billion from the IMF within a month, and $3 billion could be raised from other sources and Ukraine’s international finances would be sound.

Sergey Fursa, Debt Securities Sales Specialist, Dragon Capital: Ukraine is likely to face great economic challenges if it does not receive a tranche this fall. We’ve already seen delayed payment of pensions in July, which revealed the liquidity problem in the Ukrainian government. This problem has emerged due to the failure of the Ukrainian government to implement the borrowing plan under normal economic circumstances in domestic and foreign markets. In both cases, problems occurred because Ukraine hasn’t reached a compromise with the IMF.

As a result, Ukraine could have budget implementation problems and a currency crisis this fall. The latter is due to insufficient state currency funds to meet its servicing obligations and redeem its existing foreign debt. The government needs to refinance these funds. Meanwhile, foreign markets are closed until Ukraine reaches an agreement with the IMF. The government cannot issue Eurobonds. Concurrently, there is no opportunity to receive money from official lenders like the World Bank or the EU as they are also linked with the IMF tranche.

What will happen? There will be a currency devaluation. The government won’t be able to get dollars and will turn to the domestic market, regardless of whether it buys dollars from exporters or uses Central Bank reserves. It will be a serious hit to the exchange rate and cause significant problems with the budget. Of course, the government will try not to touch pensions, but its investment activity will drop to zero, which will hurt GDP growth and jobs. This will result in devaluation, which would cause inflation amidst social problems.

Oksana Bedratenko, analyst in Washington, DC, and former Senior Local Economist at the US Embassy in Kyiv: Delay in the IMF funding puts Ukraine’s macroeconomic stability at risk. Since July, the hryvnia exchange rate has been under pressure prompting the National Bank of Ukraine to spend foreign-exchange reserves to prop up the currency. The currency risks will grow further in the fall as the country will need to increase energy imports and fund this year’s foreign debt payments.

The IMF should act now to ease the pressure on Ukraine’s foreign currency reserves. If the tranche does not come in the early fall, the IMF program review might get caught up in Ukraine’s 2019 budget approval process, pushing the next tranche disbursement until the end of the year. As the 2019 budget debates start in the fall, the IMF would need to review possible risks presented by the new budget bill, which will prove a challenge given increased populist moods among Ukrainian politicians in the pre-election year.

The tranche disbursement, while acknowledging Ukraine’s progress on the anticorruption front, also needs to include confirmation of the government’s commitment to gas pricing reform. Following the hard-won victory with the adoption of the legislation on the anticorruption court, the IMF program stumbled upon what many had considered a technical decision to finally bring residential gas prices to market levels. This highlights the need for a new comprehensive approach to gas pricing reform to be accompanied with gas market reform and the monetization of subsidies.

Dmytro Boyarchuk, CEO of CASE Ukraine: If Ukraine does not receive IMF funding, there will be a period of nervousness and turmoil on the foreign-exchange market. However, it will not be a disaster. The fundamentals remain strong. Exports are in good shape. Monetary policy will be tight. So far we do not see any intention to loosen fiscal policy. The national currency will be volatile but that will not be anything extraordinary. The hryvnia will drop close to 1 USD/30 UAH, which is the level widely expected anyway.

To put it differently, export prices and strong remittances from abroad are much more important for Ukraine’s survival than the IMF. If we have IMF funding but prices on global markets fall, we will fall. If prices are high and exports are strong, we will survive without the IMF until 2020 when new a program will be inevitable.

Tomas Fiala, CEO, Dragon Capital: This is a very sensitive topic. While Ukraine’s National Bank foreign-exchange reserves of $17.75 billion are sufficient, the Ministry of Finance currently has only about $900 million in foreign currency versus its debt service obligations of about $1 billion that come due by the end of September. The Ministry of Finance could have easily borrowed $2 billion on the Eurobond market in the first quarter of 2018, but due to previous commitments made to investors, it wanted to tap the market only after receiving the fifth tranche under the IMF’s Extended Fund Facility. This strategy is appreciated by those of us who understand that substantial pressure was needed to push through the parliament the law on the Anticorruption Court in a form that would make the court efficient in prosecuting high-level corrupt officials, a big structural reform that will make Ukraine more attractive for investment. Unfortunately, the process took a very long time; in the meantime, liquidity left emerging markets and Ukraine’s market access closed. Without the IMF, it will remain closed and so will the $800 million loan from the World Bank and 1 billion Euro loan from the EU. Time is of the essence now and without a speedy agreement on the adjustment of retail gas tariffs, and with budget expenditures and the IMF mission arriving in early September, the hard won macroeconomic stability, accelerating GDP growth, declining inflation and debt-to-GDP ratio (currently at 62% from +80% two years ago), these and other very positive developments could be at risk.

Valerii Pekar, Lecturer at Kyiv-Mohyla and Lviv Business Schools: Ukraine will face not only financial but also political crisis; Ukrainians still are very sensitive to the floating rate of the national currency, and they consider every serious drop in the exchange rate as a political failure, not to mention delayed pensions and public sector salaries. This failure can bury hopes not only for preserving political stability (so necessary for a country at war), but in general for the liberal economic policy and Euro-Atlantic geopolitical choice, giving power to pro-Russian populists with consequences visible far outside Ukraine.

Hlib Vyshlinsky, Executive Director, Center for Economic Strategy: The Ukrainian government has a growing problem with liquidity. It has just $0.8 billion in foreign exchange accounts, which is enough only until November. Besides this, the situation with domestic liquidity is not much better. For the first time in years, disbursement of state pensions was delayed in July for some days, and on August 1 the state treasury’s balance was the lowest in four years.

The government should move swiftly in implementing its commitment to raise natural gas prices for households to market-based prices. It has full authority and responsibility to do so. This will unlock IMF financing and prevent a crisis that could unfold in an unpredictable way.

Melinda Haring is the editor of the UkraineAlert blog at the Atlantic Council and a fellow at the Foreign Policy Research Institute. She tweets @melindaharing. Vera Zimmerman translated Fursa’s answer from Russian to English.

Image: A man arranges a board outside a currency exchange office in central Kyiv, Ukraine, August 12, 2016. REUTERS/Valentyn Ogirenko