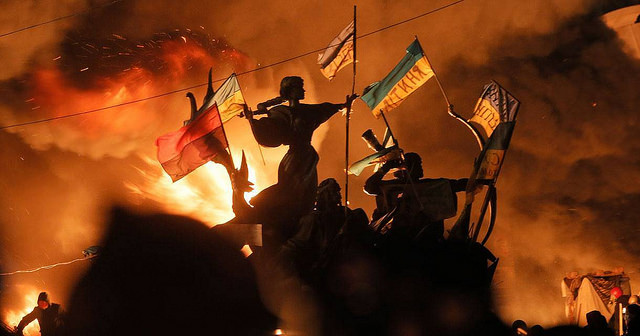 Atlantic Council Senior Fellow Rajan Menon, chairman of political science at the City College of New York, has just co-authored a new book, Conflict in Ukraine, with Eugene Rumer of the Carnegie Endowment for International Peace. The book, to be published in March by MIT Press, occasioned a discussion this week between Menon and Ukraine specialist Alexander Motyl of Rutgers University.

Here are key points by Menon in his interview by Motyl on the World Affairs Journal website:

Ukraine’s needs to rebuild a relationship with Russia: “An isolated, nationalistic, and authoritarian Russia isn’t what Europe needs—and it’s certainly not good for Ukraine. Ukraine cannot afford to be in a perpetual state of war with Russia, if only because no Western soldier will ever be dispatched to die for Ukraine.”

It’s not certain that Ukraine can accomplish radical reforms: While Ukraine’s new government is headed by able, smart leaders, Menon says that is not enough. “It’s insufficient for reforms to be economically “correct”; they must be politically sustainable and introduced in the proper sequence, with provisions for softening their most malign effects.”

Kyiv should avoid trying to recover the Russian-held Donbas: A priority for the government should be “not dwelling on recapturing the so-called Donbas republics, to say nothing of Crimea,” Menon tells Motyl. “The loss of these lands, which have been anti-reform bastions, is a blessing in disguise for Ukraine. … Ukraine is now ethnically more homogeneous: that is a huge plus given its particular circumstances.”

Ukraine should rebuild its army, drop plans to join NATO and build relations with China: Menon urges Kyiv to build a “small professional force” shaped for defense against further Russian invasions. And “besides cultivating ties with the West, increase trade and investment with China so that it gains a strategic stake in Ukraine,” he says. Also, “Ukraine should renounce NATO membership,” notably because the alliance will not admit Ukraine as a member in any near future. Thus, “Kyiv loses nothing by relinquishing something it won’t get. … A no-NATO pledge combined with a no-forces-zone [in the disputed Donbas] patrolled by peacekeepers and observers can bolster Ukraine’s security and allay Russia’s main strategic concern.”