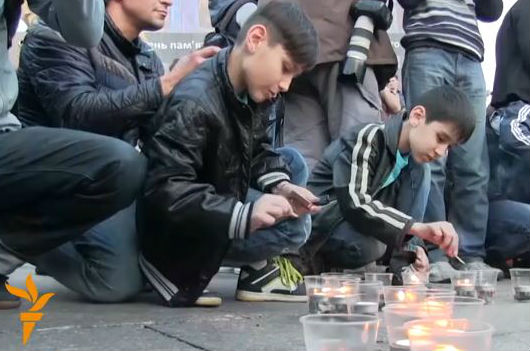 Russian authorities have forced Crimean Tatars to become Russian citizens and curtailed their freedoms of speech, language, education, and residence—as well as their right to a fair trial. That’s according to an independent group of Turkish scholars sent to Crimea to investigate human rights violations after Russia annexed the peninsula on March 18, 2014.

Crimea Report: The Situation of the Crimean Tatars Since the Annexation of Crimea by the Russian Federation is based on interviews with more than one hundred people in late April. Zafer Üskül, former head of the Turkish Parliamentary Human Rights Investigation Commission, led the delegation.

Since annexation, the delegation noted a “serious decline in the exercise of fundamental rights and freedoms, such as the right to assembly and demonstration, and the freedom of expression. The de facto authorities [have] pursued a systematic policy of suppression and intimidation.”

Turkish President Recep Tayyip Erdoğan delivered the report to Russian President Vladimir Putin at the European Games in Baku, Azerbaijan. While Turkey opposed Russia’s annexation of Crimea, it did not impose sanctions against the Kremlin.

During the Russian invasion and annexation, Crimean authorities granted self-defense units or armed paramilitary forces official status. These units were “one of the most important threats to the right to life,” Crimean Tatars told the delegation. The units conducted searches, made arbitrary identification checks, and used psychological and physical violence against residents.

On May 16, 2014, Crimean Tatars boycotted the referendum on Crimea’s accession to the Russian Federation, and they have paid a steep price. Authorities closed the Mejlis, which had represented the community since 1989, interrogated its members, and banished longtime leader Mustafa Jemilev from Crimea for five years.

Using Russia’s law on extremism which now applies in Crimea, authorities have banned other prominent Crimean Tatars from entering the peninsula for five years, including Server Kadirov and Refat Çubarov.

The delegation found that the new authorities have “pursued a policy of isolation and discrediting prominent figures of the Crimean Tatar community,” including Ahtem Çiygöz, Deputy Head of the Mejlis, who has sat in prison since January 29, 2015, even though no indictment has been filed.

On May 18, 1944, Joseph Stalin deported more than 180,000 Crimean Tatars to Uzbekistan. In 2014, during the seventieth anniversary of the Crimean Tatar (“Surgut”) deportation, troops blocked 40,000 people from their usual commemoration site in downtown Simferopol and banned it altogether in 2015.

Property rights are another big worry. When Crimean Tatars officially returned from Central Asia in 1989, they couldn’t claim their old homes or land. Instead, they build on vacant land and some gradually gained legal title (samazahvat). Russian authorities appear to respect the rights of first-wave samazahvats, but second-wave samazahvats may be at risk, the delegation noted.

The media hasn’t escaped the new authorities’ notice either. “Pressure on and control of media intensified” after annexation, the report notes. Russia’s media regulator, Roskomnadzor, denied the popular Crimean Tatar television channel ATR a broadcasting license four times, which “indicates the political nature of these decisions,” the delegation wrote. ATR managers reportedly received phone calls from influential politicians pressuring them to sell the station and stop broadcasting news about Crimean Tatar leaders. On June 18, ATR resumed its work from Kyiv. Likewise, the online Crimean News Agency, couldn’t obtain a license, and its general director İsmet Yüksel has been banned from Crimea.

While in Crimea, the delegation “noticed that feelings of fear, uncertainty, and mistrust prevail.” And it’s no wonder. The new authorities monitor social media. Usein Kuku, the Yalta Regional Representative of the Human Rights Contact Group, was interrogated for a 2013 Facebook post on the grounds that he was inciting violence.

There’s “huge pressure on religious communities,” Taras Berezovets, founder of Free Crimea, said in an interview. The FSB has raided homes, mosques, schools, and churches, forcing religious leaders to flee. After Crimea’s annexation, Russia suddenly extended its more stringent laws regulating religious activity suddenly to the peninsula. The new authorities are pursuing a “policy aimed at increasing state control over religious activities and institutions…and supporting alternative religious structures,” according to the delegation. They have issued a legal order putting all mosques under the control of the Mufti Office of Crimea, while establishing the Mufti Office of Tavriya, reportedly a political organization with close ties to Russia.

The delegation also noted “serious problems” in education since annexation. Authorities banned textbooks that were used when Crimea was part of Ukraine, leaving schools without textbooks, and have drastically cut the use of the Crimean Tatar language. Only fifteen schools operate in Crimean Tatar, while there’s need for two hundred more schools—and a Russian teacher is now required in every Crimean Tatar national school.

Berezovets noted that only two watchdogs have been allowed to visit Crimea since annexation—the Turkish delegation and the Crimea Field Mission on Human Rights— “so the importance of future visits by Turks is crucial.”

Image: At an event in Kyiv on May 17, 2015, people lit candles in memory of the many Tatars who died during their 1944 deportation. In 2014, during the seventieth anniversary of the Crimean Tatar deportation, troops blocked 40,000 people from their usual commemoration site in Crimea. It was banned altogether in 2015. Credit: Radio Free Europe/Radio Liberty.