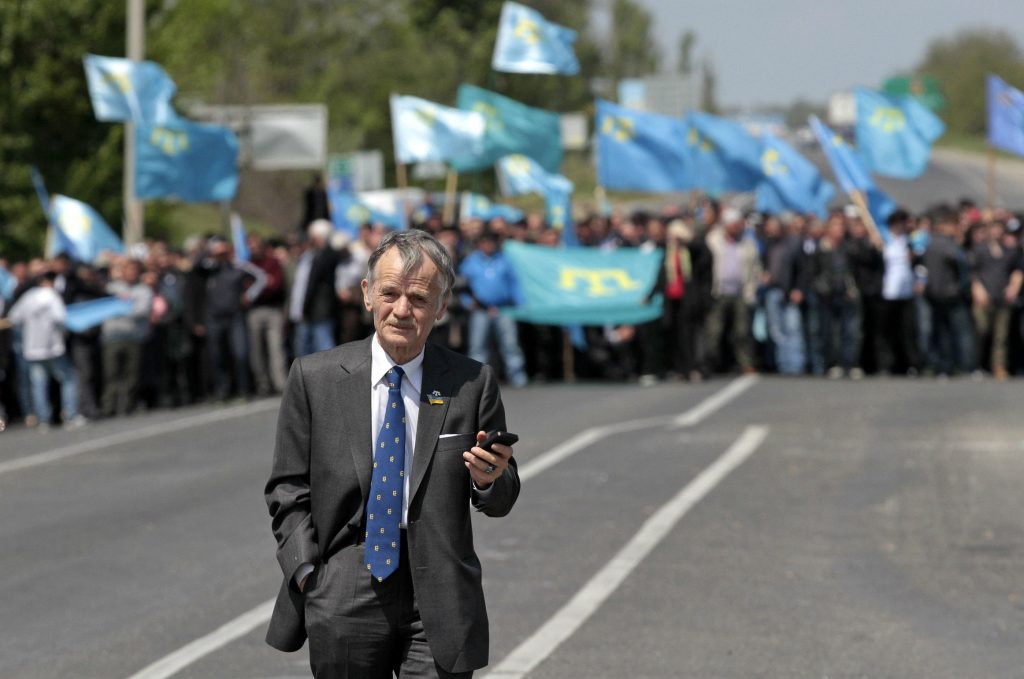 Former chairman of the Mejlis of the Crimean Tatars Mustafa Dzhemilev walks near a checkpoint in Kherson region as he attempts to get to the territory of Crimea, near the city of Armyansk, May 3, 2014. In an online statement, the Mejlis of the Crimean Tatar People said Dzhemilev, a member of the Ukrainian parliament and the former chairman of the Mejlis, had been handed a notice banning him from Russia for five years as he crossed back to mainland Ukraine after a weekend in Crimea. REUTERS/Stringer

Two years after invading and annexing Crimea, Russia appears ready to outlaw the Crimean Tatar Mejlis, the representative body of the largest indigenous people of the peninsula. The behavior which Russia deems “extremist” is essentially the Mejlis’ implacable, but always peaceful, opposition to Russia’s occupation.

It is unclear whether Western countries will respond with more than words of deep concern if the Mejlis and its 2,300 representatives at various levels are criminalized. At present, the West is largely silent, although the danger is real and immediate. As early as March 10, Russia could criminalize the Mejlis. The court proceedings now underway may be a formality, with the decision already made in Moscow; however, members of the Mejlis are determined to assert their rights to the end.

The offensive was condemned in a recent resolution from the European Parliament that recognizes Crimean Tatars as an indigenous people of Crimea whose right to self-government is protected under the UN Declaration on Rights of Indigenous Peoples. It calls for “respect for the Mejlis as the legitimate representation of the Crimean Tatar community, and for avoidance of any harassment and systematic persecution of its members.”

Oliver Loode, a member of the UN Forum on Indigenous Issues, calls representative bodies like the Mejlis the main vehicles for indigenous people to exercise their human rights. “If a representative body is banned, this is not just a hostile act towards a particular organization, in this case the Mejlis. It’s really an attack against the people, in this case Crimean Tatars.”

The offensive against the Mejlis began soon after Russia realized it could not force or bribe it into submission. Beginning in March 2014, the Mejlis called on all Crimean Tatars to boycott the pseudo-referendum with which Russia tried to justify its annexation of Ukrainian territory. Soon after, veteran Crimean Tatar leader and Ukrainian MP Mustafa Dzhemiliev was banned from his homeland, and the same thing then happened to the Head of the Mejlis, Refat Chubarov. The fact that the Crimean Tatar people as a whole were under attack was vividly demonstrated by Russia’s attempt to ban all remembrance gatherings on May 18, 2014, the seventieth anniversary of Stalin’s deportation of the entire Crimean Tatar people.

The offensive intensified in September 2014, and since January 2015, the Deputy Head of the Mejlis Akhtem Chiygoz has been arrested and imprisoned.

As early as autumn 2014, the Russian media began making unfounded claims about rampant “Muslim radicalism”’ among Crimean Tatars. In October 2015, allegations were even presented—without any glimmer of credibility—that Crimean Tatar leaders were recruiting fighters for the Islamic State.

In fact, the main word bandied around from the outset has been “extremism”: it is effectively used against anyone daring to express opposition to Russian occupation. The threat to ban the Mejlis as “extremist” was first made in the fall of 2015. Both last year and again this February, occupation authorities resorted to Soviet methods by claiming that they were responding to complaints from Crimean Tatar organizations.

The arguments thus far presented have been legally nonsensical and profoundly cynical. The de facto prosecutor Natalya Poklonskaya even presented “warnings of the inadmissibility of extremist behavior,” as though such warnings proved that the actual behavior had taken place.

A verbal warning was issued to Refat Chubarov after the events on May 3, 2014. Since those events are now being cited as evidence of “extremism,” it is worth recalling what took place. On May 2, it became clear—despite denials in the Russian media—that Moscow really had banned Dzhemiliev from Crimea. After he was prevented from boarding a plane to Simferopol, the Mejlis called on Crimean Tatars and other Ukrainians to come to the border to meet the then 71-year-old world-renowned leader. Around five thousand people arrived, with Dzhemiliev coming from Kyiv by car. Plans to escort him to Simferopol were, however, put aside because of the huge contingent of Russian riot police present and the strong likelihood of bloodshed.

The events that day were later used as a pretext for repressive measures, and have now, incredibly, prompted criminal charges against Dzhemiliev—for trying to enter his own homeland. Nariman Dzhelyal, first deputy head of the Mejlis, points out, however, that no allegations were ever brought against the Mejlis. Attempts two years later to cite those events as evidence of the Mejlis’ “extremism” are absurd.

So too, however, is the reference to the Mejlis’ founding documents, and not only because these far precede Russia’s invasion and occupation of Crimea. The documents’ “extremism,” according to the prosecutor, lies in the Mejlis’ stated aim: the reinstatement of the Crimean Tatar people’s national and political rights, and the implementation of their right to free self-determination on their national territory, within Ukraine. For those who missed the “extremism,” it is allegedly hovering in the last word.

The intensified attack against the Mejlis, and the first threats to ban it, came shortly after the beginning of the Crimea blockade in September 2015. It is certainly easy to understand why the blockade angered Russia, highlighting as it did the critical degree to which Crimea is dependent on Ukraine for food, electricity, and water. Attempts to punish the Mejlis for this are, nonetheless, without any justification. Yes, it was Dzhemiliev and Chubarov who publicly called for a civic blockade of Crimea. But both are Ukrainian MPs and prominent public figures who were not speaking for the Mejlis. Nor did the latter have anything to do with the actual blockade, which was largely run by Lenur Islyamov, a person with no connection to the Mejlis.

Dzhemiliev has estimated that thirty-three members of the Mejlis itself, as well as around 2,300 Crimean Tatars involved in self-government at the regional level, could be at threat if Russia goes through with its plan to criminalize the Mejlis. All Crimean Tatars, however, are at risk—and at this point, the West has again stood back and done nothing.