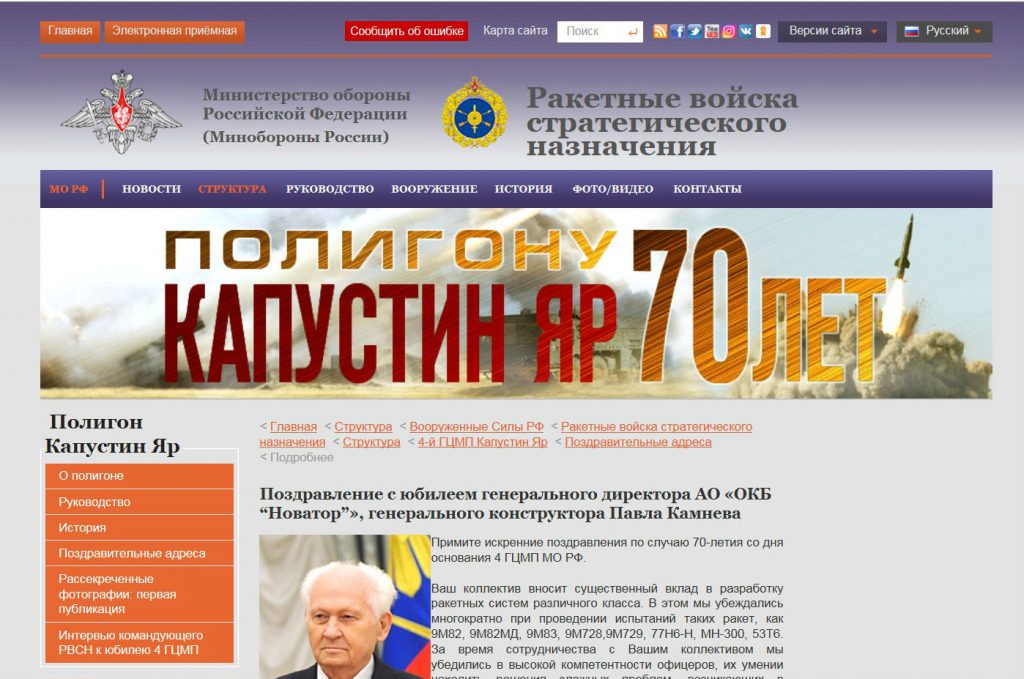 Thirty years ago, on December 8, 1987, Mikhail Gorbachev and Ronald Reagan signed the Intermediate-Range Nuclear Forces Treaty (INF), which entered into force on June 1, 1988.

The parties pledged not to produce, test or deploy ballistic and cruise land-based missiles of medium range (from 1,000 to 5,500 kilometers). Elimination of all declared missiles and launchers under the treaty was completed in 1991.

This treaty does not expire. Yet Russia has violated the agreement by testing a new cruise missile, the 9M729, which has an approximate range of 2,000 to 5,500 kilometers.

Russian President Vladimir Putin secretly began testing rocket launchers (the Iskander-M missile systems) armed with banned 9М729 missiles with nuclear warheads. The White House has been aware of these tests since 2014, and former President Barack Obama repeatedly warned Russia to refrain from breaching the 1987 treaty. These warnings were ignored and Russia has deployed two battalions with 9M729 missiles.

How can we say this with certainty?

Now, the banned missile is shot from an Iskander-M mobile launcher, as are other missiles that aren’t banned, which makes detection a serious issue, if one considers strategies to control arms.

We also know from procurement plans that Russia moved forward with the banned missile. The missile launcher for 9M729 includes new self-propelled 9P701 launchers and 9T256 transport-loading vehicles. According to the Central Design Bureau’s 2016 procurement plan, the firm that designs the Iskander-M systems, it planned to purchase eight chassis for the production of four 9P701 and four 9T256. If the Kremlin were only planning to use the old missiles permitted under the 1987 treaty, these modifications wouldn’t be necessary.

What does this all mean?

The Kremlin uses its nuclear capabilities not as a means of protecting Russia’s borders and territories, but as a tool to achieve its goals in the international arena, while dictating terms to democratic states.

Russia’s foreign policy is dangerous and unpredictable. Constant military exercises on the Ukrainian border, the annexation of Crimea, military aggression in the Donbas, and the violation of Turkey’s airspace are proof. No political leader can guarantee that Russia won’t start using lethal weapons at any time against NATO member countries.

Iskander missiles can justifiably be considered one of the most dangerous threats. First, its missiles are capable of carrying various types of payloads, from chemical weapons of mass destruction to nuclear payloads. Second, one should take into account the range of this missile. For example, if the Iskander system with 9M729 missile were deployed in the Kaliningrad region, it could easily reach Germany and the UK.

Given Russia’s recent aggressive behavior, the possession of such weapons threatens the international order. Few take comfort in knowing they could fall victim to Russia’s military aggression. And given Russia’s unpredictability, this new cruise missile keeps NATO in a state of high alert.

Since these missiles can travel up to 2,100 meters per second, NATO would have very limited time to respond if attacked. Bringing down the missiles through air defenses would not be easy. There is a slight possibility of shooting down a 9М729 cruise missile, however, only if air defense systems are already on combat duty, and a decision would need to be made in four minutes or less.

The banned missiles can transported by sea and launch nuclear warheads directly from a warship. There is no need for the Russian Navy to enter another state’s waters; it could simply transport the missile system to a desired distance from a target.

But will the Kremlin actually use them?

Maybe. More likely, the Kremlin will use the missiles as a bargaining chip and attempt to intimidate adversaries.

The United States and its Western allies, including Ukraine, must raise this issue in the UN, and with NATO and the EU.

Make no mistake about it: these weapons pose a direct threat to world peace and stability. While the civilized world addresses political and security issues through diplomacy and compromise, the Russian government continues to understand only the language of force.

Semen Kabakaev is coordinator of Stop Terror in Ukraine, a nongovernmental organization that covers Russia’s presence in the Donbas and Crimea. He tweets @SemenKabakaev.