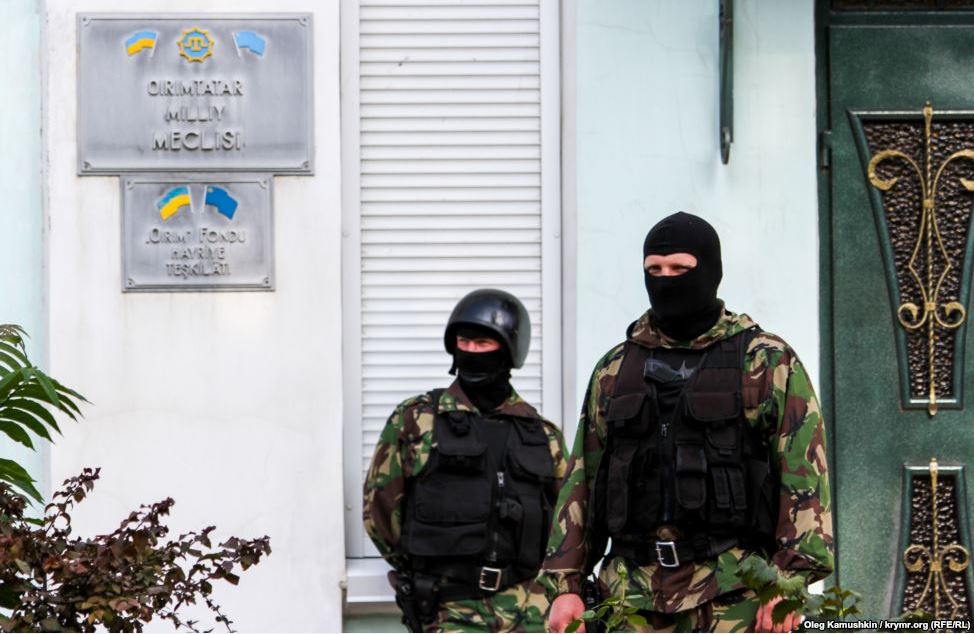 Masked soldiers without insignia guard the entrance to the headquarters of the Crimean Tatar Mejlis after Russia’s Crimean authorities raided and sealed the building September 16. Russia has banned the most prominent Tatar leader, former Mejlis Chairman Mustafa Dzhemilev, from entering Crimea, and has searched Tatar homes and institutions for “prohibited literature.” (Oleg Kamushkin/krymr.org-RFE/RL)

Russian authorities in Crimea have moved since last week to silence and isolate the peninsula’s main ethnic Tatar community and political organization, the Mejlis. Russia’s government has shut down the group’s headquarters in Crimea and tried to prevent Tatar representatives from attending a United Nations conference in New York on indigenous peoples.

Crimea’s Tatars, who are Muslim and ethnically Turkic, form about 10 percent of Crimea’s two million-plus population. Russia started suppressing Tatars and other dissenters as soon as it seized the peninsula from Ukraine in March. It banned the Tatars’ most senior leader, former Mejlis chairman Mustafa Dzhemilev, from entering Crimea. Authorities shut down Tatar pro-Ukraine news organizations and TV channels; arrested and harassed independent journalists; and deported a Crimean filmmaker to Moscow for trial on terrorism charges.

Still, the Russian authorities held back during the summer campaign for local elections held last week. In the September 14 vote, the government of President Vladimir Putin was seeking to strengthen its hold on local and provincial assemblies nationwide, and in Crimea. On the peninsula, the Putin-allied United Russia party won control of the new provincial legislature. The Tatar community, which largely boycotted Russia’s March 16 referendum on annexation of Crimea, also boycotted last week’s vote.

Then, just hours after the polls closed, the new crackdown began – at 3:15 a.m. That was when security cameras at the Mejlis’s headquarters building showed three masked men, one with a gun, and one who climbed the building’s façade to rip down a Ukrainian flag that the Mejlis had flown for months alongside its own Tatar community flag.

Hours later, according to an account by human rights advocate and writer Halya Coynash of the Kharkiv Human Rights Protection Group, officers of Russia’s state security police, the FSB, arrived and with “armed men in military uniform blocked the Mejlis and carried out an eleven-hour search” of the building. The Central District Court of Simferopol ordered the building’s owner, a Tatar community charity called the Crimea Fund, to vacate the structure within twenty-four hours. The order froze bank accounts and other assets of the fund over what the court said was an unspecified lawsuit by unnamed persons against the charity.

Mejlis officials tried to evacuate as much of their equipment and files as they could, but the building, which also houses the offices of the group’s newspaper, Avdet, and of the Crimea Fund, could not be emptied fully. Authorities sealed it and seized much of the groups’ property still inside. The chief editor of Avdet, Shevket Kaybullaev, was summoned to an FSB office and warned that his articles had encouraged the election boycott and that he faces prosecution.

Russia also has tried to block Crimea’s Tatars (as well as other indigenous Russian minority groups) from taking part in the United Nations’ first-ever World Conference on Indigenous Peoples, which is taking place today in New York. Ukrainian Foreign Minister Pavlo Klimkin tweeted last week that “Russian Federation has submitted a written protest against participation of Mejlis” in the conference.

While the Russian protest was disallowed, a prominent Tatar minority rights advocate, Nadir Bekirov, was prevented from leaving Crimea when a vanload of thugs intercepted his car as he began his trip to New York. Radio Free Europe/Radio Liberty reporters in Simferopol wrote that Bekirov told them that “Four masked men emerged, pulled him from his car, forced him to the ground, and took his Ukrainian passport and mobile phone. He said one of the attackers opened his passport and told the others: ‘Yes, that’s him!’” Left without his passport, Bekirov was unable to leave Crimea for the conference.

(Russia blocked other indigenous minority leaders from attending the conference, according to the International Work Group on Indigenous Affairs, a network of researchers and human rights activists. Rodion Sulyandziga, and ethnic Udege from Siberia who was one of the organizers of the UN conference, was denied permission to fly out of Moscow after officials took his passport and returned it to him with a page removed – a condition they said disqualified him from traveling. Valentina Sovkina and another leader of the Saami ethnic group were delayed in leaving for the conference after her “car tires were cut, they were stopped by traffic police for several hours and an attempt was made to snatch Sovkina’s belongings,” the group reported.)

The crackdown against Crimea’s Tatars has included a string of armed searches by police of the homes of Mejlis leaders and other Tatar activists, as well as at a Tatar school and a mosque. The officers told Tatars that they were in search of “weapons, drugs and prohibited literature,” according to an account last week by Andrei Kolokoltsev, a Simferopol correspondent of RFE-RL.

Many of Crimea’s Tatars describe Russia’s military seizure of Crimea in March as a third historic tragedy for their community, following the czarist Russian Empire’s annexation of their state in 1783, and former Soviet leader Joseph Stalin’s brutal deportation of all Tatars from Crimea to Central Asia in 1944, an ordeal in which nearly half of their quarter-million population died. Since the 1992 collapse of the Soviet Union, the Tatars have been moving back to Crimea to rebuild their community, a process that some ethnic Russians on the peninsula have resisted, for fear of losing power, land, and economic advantages.