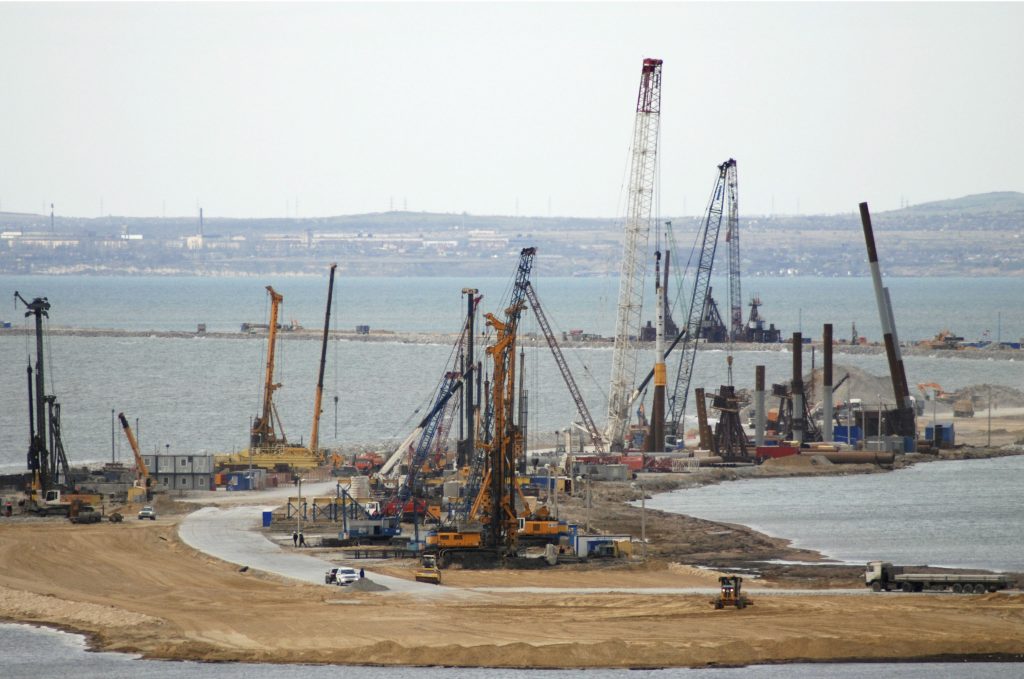 The construction of a bridge across the Kerch Strait to Crimea is seen from the outskirts of the Taman settlement in Krasnodar region, southern Russia, April 4, 2016. REUTERS/Andrew Osborn

Russian President Vladimir Putin has called construction of a bridge between Russia and occupied Crimea a “historic mission.” He should pay better attention to history. This mission is doomed to failure, and not only because of sanctions. Experts warn that even if the bridge now under construction can be finished, its chances of standing for any length of time are small.

There has long been talk of building a bridge across the Kerch Strait, where the Azov and Black Seas merge, to link Russia and Crimea. However, only one bridge has ever been attempted. It was just 4.5 kilometers long and was constructed by the Soviet Army in 1944. Within six months, the bearings were destroyed by icebergs. Although the swift end of a largely makeshift bridge is no proof that a well-made bridge will not endure, it is significant that none of the many plans put forward in Soviet times or in independent Ukraine ever got moving.

Construction of a nineteen kilometer bridge through the Tuzla Spit began shortly after Russia’s annexation of Crimea. Putin’s haste was not just another dangerous whim. Despite Moscow’s stubborn narrative about Crimea really being Russian, the truth is that Crimea is dependent on Ukraine for water, electricity, and general supplies. A bridge would change that equation.
But Georgy Rosnovsky, the creator of two Ukrainian Kerch Strait bridge designs, cannot understand why the current plan through the Tuzla Spit was chosen. As he told Focus.ua, it is the most complicated and expensive option. Assuming generous financing, the bridge can be built, but he doubts that it will last very long given the area’s poor geological conditions. These include deep-lying mud volcanoes and a sludgy bottom that is unsuitable for bridge foundations. Most disturbingly, it is an area of high seismic activity. The piles would need to be much deeper than they are in the current design, and he fears that the construction is likely to be weak. The bridge spans also need to be over 200 meters to ensure that they aren’t damaged when the water freezes; this is currently not in the plan.

Rosnovsky also takes issue with the bridge’s proposed height. The Russian project is thirty-five meters high, compared to the minimum fifty meters listed in the recommendations for the Ukrainian projects. This will hamper the movement of boats in the area, especially in storm conditions. A Turkish trawler has already rammed into the bridge’s temporary bearings.

Criticism comes from Russia as well. Russian construction engineer Yury Sevenard expressed identical concerns about the geology, seismic activity, and extreme weather conditions. And in December 2016, Yury Medovar from Russia’s Academy of Sciences said that the bridge is being built without a proper design, since nobody wants to take responsibility for it. The bridge cannot be built, he said, and God help us if it is, since it can’t last.

But Putin wanted a bridge, and he wanted it fast. This meant doing away with inconvenient environmental impact assessments and public hearings. In what environmentalist Dmitry Shevchenko calls a blasphemy of both the law and Russia’s constitution, the State Duma swiftly passed a law allowing for such a fast-tracked and unmonitored construction. The bridge was to be designed and built simultaneously, with the permits for the designs a mere formality.

Even the law itself was adopted well after the initial preparatory work occurred. The contract for building the bridge had been awarded in January 2015 to the SGM Group owned by Arkady Rotenberg, a friend of Putin’s. Rotenberg claimed that he was doing this “for the country.” However, he and his brother are reported to have profited massively from contracts for the Sochi Olympics; it was clear that Rotenberg could be relied upon to not worry about environmental damage, safety issues, or the rights of local inhabitants.

In addition to the potential for disaster if the bridge collapses, there has been zero concern about possible damage to the environment and the disruption of the water flow between the Black and Azov seas. Environmental Watch and other activists have warned of irreversible consequences to the area’s flora and fauna.

The Kremlin has invested huge sums in propaganda promoting this more than $4.5 billion project, but its costs continue to mount. A second tender for building railway approaches to the bridge recently failed due to a lack of bidders. Contractors must be concerned about the massive risk, as insurance companies won’t take on such clients; according to Maxim Hardus, a journalist working in the transport sphere, around two thousand companies have had their applications for insurance coverage turned down. Vedomosti has reported that the bridge at present is insured only by “an unknown Crimean company.”

And ending of sanctions will not significantly change the situation. According to a separate agreement between Ukraine and Russia, any construction in the Kerch Strait has to be with the permission of both sides. For that reason alone, all construction work is totally illegal. Additionally, the UN General Assembly has condemned Russia’s occupation of Crimea, and the International Criminal Court has recognized Russia’s invasion of Crimea as constituting an international military conflict.

If direct sanctions were to be lifted, investors might be found who are willing to ignore these resolutions. They would, however, surely not go in without insurance. Even if insurers are ready to sully their reputation by insuring an invader’s illegal construction, they should think long and hard before knowingly insuring a bridge with every chance of collapsing.