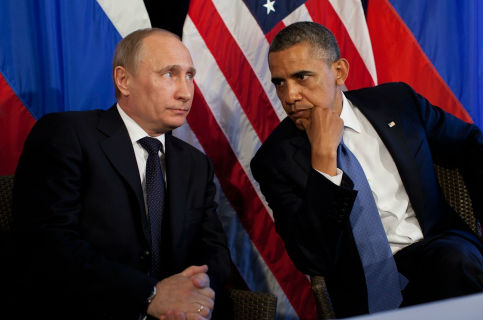 Russian President Vladimir Putin and United States President Barack Obama meet at the G20 summit in 2012. Western governments—not least the Obama administration—appear unable to grasp the need for a comprehensive strategy for European security that goes beyond military aspects. Instead, the White House is still obsessed with Middle East security and the illusion that it can find a basis for common action with Moscow against Islamic terrorism. Credit: White House

Recent articles in the US media suggest that the Pentagon is “rebalancing” its forces towards Europe to meet the Russian challenge. At the same time, NATO plans to halve the number of air patrols over the Baltic. Supposedly the Russian threat to Estonia, Latvia, and Lithuania has ebbed, and governments are finally stepping up to Europe’s defense.

If only this were true. In fact, even though Russia hasn’t yet attacked Ukraine head-on, and the time for such a full-scale offensive is slipping away—not to mention the crippling impact sanctions and falling oil prices have had on Russia’s economy—the Kremlin threat has not gone away.

Even so, Western governments—not least the Obama administration—appear unable to grasp the need for a comprehensive strategy for European security that goes beyond military aspects. Instead, the White House is still obsessed with Middle East security and the illusion that it can find a basis for common action with Moscow against Islamic terrorism. This fixation endures despite the fact that Russia’s occupation of Ukraine constitutes the world’s top threat to global security. Allowing aggression on this scale only invites more aggression everywhere by all parties, not just the Islamic State of Iraq and al-Sham (ISIS).

Although Russia may not be an existential threat to the United States, it certainly threatens vital US interests and values. Moreover, Moscow feels threatened by American power and values as embodied in NATO and the European Union. Indeed, over the last few years, Russian President Vladimir Putin has steadily mobilized his country for a long-term, multi-dimensional conflict against the West in which the military plays two roles. Sometimes, when needed, it deploys its power beyond Russian borders and conducts offensive operations to conclude what had previously been a largely political-informational-economic operation. But on a regular basis, Russian military power serves to intimidate and threaten—but not fight—NATO and Eastern Europe. Western militaries have adopted the term “hybrid warfare” to characterize the Russian threat. But that’s only a small part of it. Indeed, this term doesn’t even exist in Russian military literature.

While students at the US Army War College and US Naval Postgraduate School have produced excellent studies of the strategy, military brass here and abroad are still in the dark—with governments unwilling to acknowledge either the flexibility for conventional and nuclear options that now form Russian strategy, or to engage that strategy’s non-military elements. Instead the US Army in Europe is trying to make 30,000 troops look like 300,000. Rest assured that the Pentagon’s best efforts will not fool Moscow.

Likewise, nobody want to admit that the combined air, air defense, naval and land-based systems that Moscow has placed in the Baltic and Black Seas would impose heavy and possibly unacceptable conventional costs on NATO if it had to enter either body of water to defend its allies. This raises the real possibility that in future conflicts, NATO will avoid entering those theaters on behalf of its members. In such a scenario, the alliance will only have nuclear deterrent options. In addition, European elites may not be as committed as we think to Article V of the Washington Treaty; discouraging public opinion polls attest to this trend.

Those who suggest that the Russian threat is abating or isn’t as serious as claimed by US military commanders are only deluding themselves. Even under strained circumstances, Russia retains the strategic offensive and has both military and non-military assets that allow it to conduct flexible, wide-ranging tactical actions to advance its strategic objectives: namely a neo-imperial hegemony over Eastern Europe and Eurasia, and the de facto dissolution of NATO.

While boosting defense spending and creating a genuine, robust NATO conventional deterrent is key to deterring further military adventures, it is not enough. Western policymakers must jointly craft a real, credible strategy with economic, information, and political dimensions to accompany their military strategy. Words alone will never deter Russia, nor will they address the multifarious crises of governance and economic stagnation now undermining European security. Until such a strategy comes into being, politicians who say Russia isn’t that great of a threat or who won’t pass the needed instruments of policy are only sticking their heads in the sand. If these statesmen—like those of the pre-World War I era—are still sleepwalking, what it will take to rouse them before it’s too late?