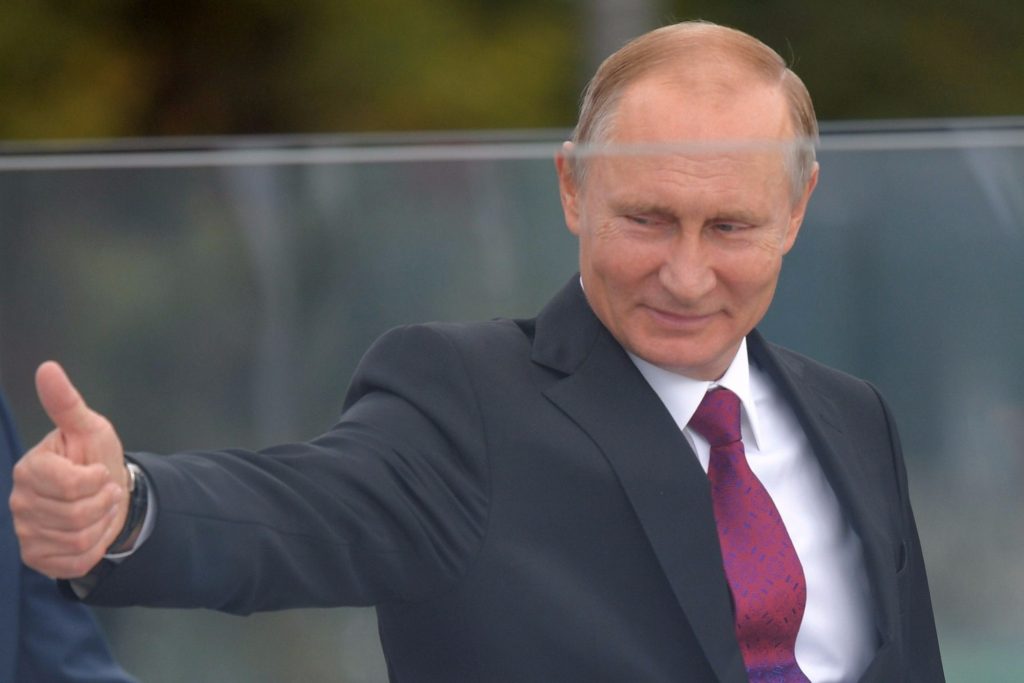 Russia President Vladimir Putin gives a thumbs up during a visit to the newly opened Zaryadye Park off Red Square in central Moscow, Russia September 9, 2017. Sputnik/Alexei Druzhinin/Kremlin via REUTERS

Russia has introduced a United Nations draft resolution for peacekeepers in Ukraine amid acclaim by German Foreign Minister Sigmar Gabriel and the chairman of the Organization for Cooperation and Security in Europe (OSCE). On its face, this would appear to meet a long-standing demand of the government in Kyiv and mark a reversal of Russia’s previous position. As recently as April 25, Russian Foreign Minister Sergei Lavrov rejected the concept of peacekeepers as contrary to the Minsk peace process.

The resolution follows comments by Russian President Vladimir Putin on June 5 following a meeting of the BRIC countries. Putin’s support was more tepid, however, than noted by most commentators. As soon as he used the term peacekeeper, Putin immediately backtracked and said he supported “not even peacekeepers, but those who provide security for the OSCE mission.” He hedged this support even further, stating that this new group of bodyguards should be located only on the demarcation line between Ukrainian and rebel forces, “and on no other territories.” The rebel-controlled sections of the Ukrainian-Russian border would remain opaque to international observers, and thus remain a conduit for rebel resupply. On September 11, he told German Chancellor Angela Merkel that UN peacekeepers might be deployed in other parts where OSCE monitors work, but even this concession still leaves Russians to decide where monitors can go.

Putin said that before peacekeepers could be deployed, the warring parties had to disengage and remove heavy equipment from the contact line. He opined that such moves could only be accomplished by direct contact with representatives of the self-proclaimed People’s Republics of Donetsk and Luhansk. Putin avoided mentioning reasons why the two sides had repeatedly tried and failed to disengage since 2015, including numerous separatist ceasefire violations. He also neglected to point out his calls for contact with the rebels would bestow a form of de facto recognition on them that the world community has withheld. His calls for “peacekeepers” are therefore a cynical attempt to procure a diplomatic advantage for rebel forces without surrendering any tactical advantages.

A review of recent history indicates the Russian president may have a more strategic goal in mind. In December 1991, Transnistrian rebels began a series of raids on Moldovan police stations, and the Russian 14th Army sided with the rebels. By March 1992, the Russians were openly in combat with the armed forces of Moldova. The fighting ended when 400 Russian peacekeepers (supplemented by 2,100 Russian troops in Transnistria) were deployed to protect OSCE observers in a security zone. The Russian troops also blocked the internationally recognized government of Moldova from exercising its sovereignty over the Russian-backed rebel Transnistria region.

Much the same story can be told about Georgia. In 1992, Russian paratroopers landed in Sukhumi to protect Russian tourists caught in a separatist struggle. Russian troops intervened frequently on the side of Abkhaz rebels, both overtly and covertly. Russia then legitimated its military presence when the UN approved its membership in mixed monitoring groups. By 1994, this had evolved into a 1,600 member Russian peacekeeping force to police a ceasefire “witnessed” by Russia, the UN, and the OSCE. In South Ossetia, Russia deployed interior troops who monitored a Russian-sponsored ceasefire.

In 2008, when NATO heads of state considered membership for Georgia and Ukraine, Russian Ambassador to NATO Dmitry Rogozin threatened to renew the Georgian conflict. “As soon as Georgia gets some kind of prospect from Washington of NATO membership, the next day the process of real secession of these two territories from Georgia will begin,” he said. As for Ukraine, Putin told US President George W. Bush that it was not a real country and that Ukraine would “cease to exist as a state” if it joined NATO. Putin hinted that Russia would encourage secession of Crimea and the Donbas. When Georgia decided to respond militarily to separatist shelling of ethnic Georgian villages, Russia used the incident to justify the intervention of its 58th Army to “protect” the peacekeeping force.

In the light of the Kremlin’s previous use of peacekeepers to perpetuate its military presence in the former republics of the Soviet Union, Putin’s calls to protect OSCE peacekeepers in eastern Ukraine should be seen as an attempt to perpetuate the control of Russian-backed rebels protected by a screen of Russian peacekeepers. The West should ignore Putin’s UN Resolution. Russia does not have a history of supporting legitimate peacekeeping troops in the former Soviet Union. If international politics demands the West accept the Kremlin’s proposal, then the West should stand firm against the presence of Russian troops in any force deployed along the contact line.

James J. Coyle is a nonresident senior fellow at the Atlantic Council and the author of Russia’s Border Wars and Frozen Conflicts (2017: Palgrave Macmillan).