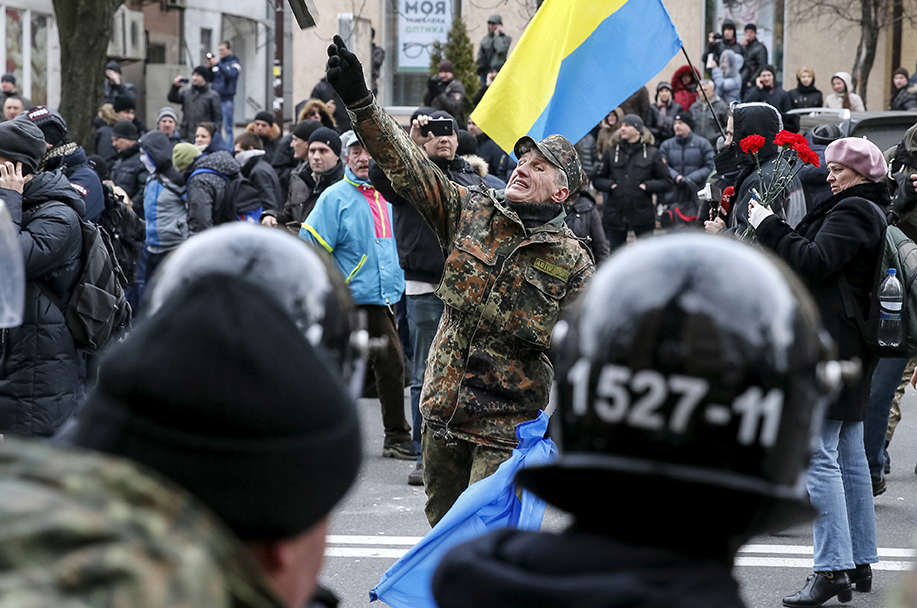 In recent months, the relative calming of the Russian-Ukrainian war in the Donbas has led many observers to describe this confrontation as yet another “frozen conflict” in the post-Soviet space. Yet even if Russian military activities ceased completely, the analogy is misleading. It is not always understood that Ukraine’s neighbor to the east is actively using three separate approaches to keep the Ukrainian state in crisis mode.

First, Ukraine has been the victim of “traditional” (if covert) armed aggression from Russia, which has ebbed but continues. Second, it is also suffering from the severe direct economic consequences of this war. Finally, the Kremlin is also conducting a non-military, multi-vector hybrid war against Ukraine that is only partially visible to the West. This carefully concerted and partly hidden subversion of the Ukrainian state is being pursued through a wide variety of means—economic sanctions, secret intelligence operations, international propaganda campaigns, purposeful cyber attacks, diplomatic interventions, and political pressure—and has many indirect consequences for the Ukrainian economy and society at large.

In this manner, for example, Moscow has equipped its puppet governments in the Donbas with one of the Europe’s largest tank armies—larger than the fleets of heavy armored fighting vehicles owned by Ukraine or Germany, for example. The enormous military buildup of the so-called “People’s Republics” is not only about preparation for an imminent military offensive. Instead, it serves to project Moscow’s power in eastern Ukraine and to create a constant threat to a militarily overmatched Kyiv. Russia’s arming of its two satellite regimes in the Donbas and large troop deployments along the Russian-Ukrainian border prevents Ukrainian society from focusing on internal matters, and diverts resources toward strengthening defensive capabilities and away from other needs.

Possibly the most important aspect of the Kremlin’s hybrid warfare is not its immediate effects as much as the underlying socio-psychological and politico-economic calculus behind it. Ukrainians are becoming worn down by being held in a state of suspense over months and years—stuck between calm and tension, war and peace, insecurity and stability. In particular, this creates volatility and frustration in the Russian-speaking regions bordering Russia, and along the Black and Azov seas. Local entrepreneurs are discouraged, young university graduates disillusioned, civil society activists unsettled, international partners made nervous, and foreign investors scared off.

This tactic could eventually hollow out the territories of so-called “New Russia”—that is, southeastern Ukraine—to such a degree that they sink into isolation, depression, radicalization, and violence. According to the logic behind this approach, the region will sooner or later fall by itself into Moscow’s lap.

Moscow’s hybrid war also distracts Kyiv from reforms and, in a sense, makes them pointless. Of course, serious internal factors—most of all, the resilience of corrupt networks of oligarchs, compromised civil servants, and politicians for sale—share responsibility for Ukraine’s faltering reform efforts. However, the blowback effects of Russia’s multi-vector hybrid war on the Ukrainian state, economy, and civil society explain a great deal about why the country’s attempts at transformation have so far failed to bear fruit: the drafting and implementation of reforms is constantly being subverted by economic, political, psychological, military, and diplomatic harassment from Russia.

In fact, even a thoroughly reformed Ukraine would remain dysfunctional in the face of continuing Russian threats, pressure, and sabotage. Russia is too close, too powerful, too ruthless, and shares too long of a border with Ukraine to permit Kyiv to simply cut itself off from its neighbor.

In this way, the Kremlin is able to kill three birds with one stone. First, it prevents the consolidation, rebirth, and Europeanization of Ukraine—and with that, the rise of an eastern Slavic counter-model rivaling Putin’s system. Second, it weakens the project of European integration and the entire West, which will be forced to invest great sums of money for years to keep basic functions of the Ukrainian state intact. Third, the Kremlin is laying the groundwork for new territorial expansion, should its tactics of destabilization and disillusionment in southeastern Ukraine be successful.

Andreas Umland is Senior Research Fellow at the Institute for Euro-Atlantic Cooperation in Kyiv and general editor of the book series Soviet and Post-Soviet Politics and Society distributed outside Europe by Columbia University Press.

Image: A protester hurls a stone at a regional branch of Sberbank, Russia’s largest bank, during an anti-Russia protest in Kyiv, Ukraine, on February 20. (Reuters/Gleb Garanich)