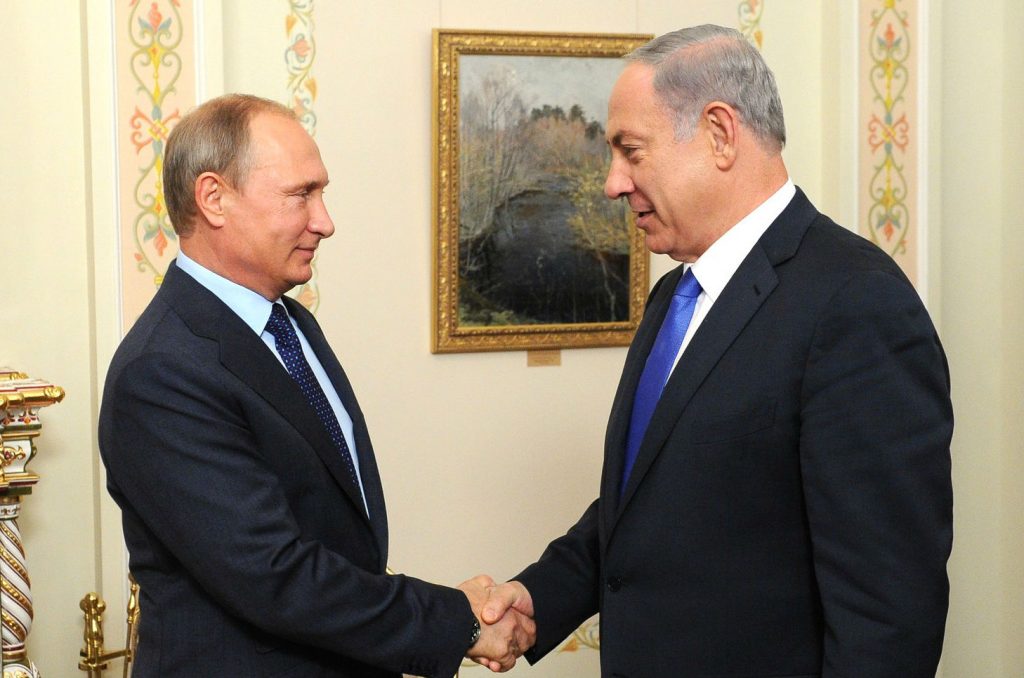 Russian President Vladimir Putin met with Israel Prime Minister Benjamin Netanyahu in Putin’s home outside Moscow on September 21. Netanyahu told Putin that his government worries that Iran and its allies might seek to open a new front against Israel from within Syria. The prime minister said that they had agreed to coordinate measures to prevent miscalculations that could prevent a larger war. Credit: Kremlin.ru

Predictably, Russian President Vladimir Putin’s intervention in Syria surprised the West. While it seems we’ve now figured out Putin’s objectives there, how they fit into Russia’s larger strategy still remains obscure. But we must begin to address that larger strategy even if the analysis remains incomplete.

Besides sustaining Syrian President Bashar al-Assad as long as possible, this intervention builds on Russia’s long-term effort to project enduring naval and air power in Europe, not just the Middle East. Moscow has long sought naval bases in Cyprus and Montenegro.

Russia’s military escalation in Syria confirms and extends the strategic significance for Moscow of owning virtually the entire Black Sea and using it as a base to project power, maintain strategic influence, and enforce gunboat diplomacy throughout the Balkans and the Levant through a combination of arms and amphibious operations abroad.

Moscow is also trying to create a coalition—if not a bloc—of pro-Russian Shiite or anti-Sunni Alawite states with which to confront the United States and its allies. This bloc aims to force Washington to acknowledge Russia as an equal player there and give it veto power over United States and allied Middle East policies. It is no accident that this coalition of Iran, Iraq, and Syria perfectly conforms to the rejectionist front against the 1979 Camp David Accords, the Soviet Union’s last major Middle Eastern initiative.

The partnership that Moscow is cementing with Iran in the face of Washington’s nuclear deal aims to extend the concept of a frozen conflict familiar to us from Eurasia to the Middle East. Russia’s current policy of building bases and housing for thousands of troops represents the Kremlin’s determination to keep Assad in power. But it’s not really an operation against the Islamic State, since Putin has already said Russian troops won’t fight ISIS; rather, they’ll fight Assad’s other enemies.

Putin’s plan for a coalition is that essentially all the Sunni states fight Sunni extremists for the benefit of Iran and its terrorist allies, Assad and Hezbollah. Russian and Western sources have revealed that Moscow facilitates the movement of terrorists from the North Caucasus to Syria and Iraq so that they do not fight in Russia—hardly a sign of Putin’s commitment to battle terrorism. In fact, Moscow continues to supply weapons through Syria and Iran to Hezbollah even as it trades with Israel and insists on helping bring Hamas into power in the West Bank—alongside the Palestinian Authority—and denies that Hamas is a terrorist organization.

Yet Moscow’s Mideast strategy isn’t only about military strategy. Russian arms sales go hand in hand with its efforts to influence energy projects in Algeria, Iran, Iraq, Libya, Syria, Turkey, and even Cyprus. Russia clearly seeks leverage on gas and oil supplies to Europe and tries to persuade Saudi Arabia to collaborate in raising energy prices to rescue its own troubled economy. This confluence of arms sales, energy deals, and military power projection points to a larger strategy with discernible geopolitical aims.

Turkey, a NATO ally, is also feeling the Russian squeeze. Once Russia finishes building its bases in Syria, its overwhelming dominance in the Black Sea and air and naval capabilities to the south will sandwich Turkey between them. Even as bilateral energy talks sputter and that relationship has soured, Moscow is now bringing into play new ways of pressuring Turkey. A look at Turkish defense procurements and plans for importing weapons suggests that Ankara has begun to grasp the threat. But no one wants to discuss this pressure on a fellow NATO member.

Russia’s intervention in Syria also shows its readiness to seize tactical opportunities as they present themselves to advance its European initiatives as well. Previously Moscow was willing to press Iran if that would lead to US concessions in Europe; Putin hopes to leverage the bogus idea of an anti-ISIS coalition to obtain relief from sanctions and its increasingly stagnant war in Ukraine.

US and European diplomats may grasp this element of Russian strategy, but they still seem incapable of responding effectively—either militarily or politically—whether in the Baltics or in the Middle East. French President François Hollande’s statement that the West should lift its sanctions if Russia implements Minsk II—even though that would be a suicide pact for Ukraine—along with German Chancellor Angela Merkel’s declaration that the West must engage Russia in the Middle East reflect this continuing addiction to wishful thinking rather than hardheaded analysis. Under the circumstances, is it any wonder that Moscow continues to catch the West off guard?