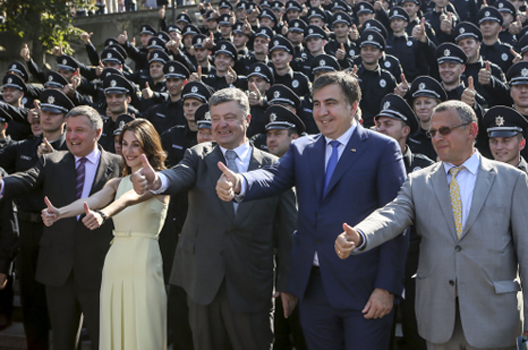 Eastern Ukraine’s Donbas region is strewn with remnants of Russian-made cartridges from AK-74U rifles, littered with the splintered, hollowed-out ruins of Russian-made BTR-80 armored personnel carriers, and scarred with the skeletons of Russian T-74B battle tanks. Yet the Kremlin’s incursion into Ukrainian territory is not isolated to the Donbas. Its influence has also permeated the information environment—especially since the “de-escalation” brought about by Minsk II.

Much has been written about Russia’s information operations against Ukraine and the West. In particular, US and European media outlets love to use the St. Petersburg-based Agency for Internet Studies as the ultimate example of Russia’s determination—and some would have you believe mastery—to win the hearts and minds of disillusioned audiences in Ukraine and in the West.

In reality though, Russian propaganda in Ukraine is not only clumsy but, like its predictable military support of separatists in eastern Ukraine, it’s very easy to identify. You don’t need to look any farther than Odesa to see that Russia’s attempts to create discontent are dissipating rapidly.

Odesa is, and will mostly likely be for the foreseeable future, a predominantly Russian-speaking city. According to Ukrainian census figures from 2001 (the most recent figures available) nearly 65 percent of Odesa’s inhabitants identified Russian as their native language. Yet Russian media hasn’t found a way to penetrate the city—even with the Ukrainian National Council for TV and Radio Broadcasting’s 2014 banning of Russian state-controlled TV channels.

Instead, pro-Russia voices in the media have latched onto anti-Ukrainian government narratives in an attempt to exploit Odesa’s general discontent with Kyiv. These outlets, which avoid seeming overtly pro-Russian, include Timer-Odessa.net, owned by Igor Markov, co-founder and director of Patriots of the Fatherland and Russia Club; Infocenter-Odessa.com, edited by Artem Buzila, a well-known Odesa journalist known for his support of separatism and Russia; and Third Digital, a TV channel owned by the pro-Russian Ukrainian parliamentarian Sergei Kivalov.

From my observations of the Odesa media environment, pro-Russian and pro-Ukrainian narratives exist seemingly within their own echo chambers. Their effect to sway people is minimal, and with the war already nearly a year and a half old, they serve to reinforce their audiences’ pre-existing perceptions rather than act as a destabilizing force. The coalescence of diametrically opposing narratives is not unique to Odesa; nearly the same environment exists in Kharkiv, Mykolayiv, or Kryvyi Rih in the Dnipropetrovsk region.

But instead of creating divisions in Odesa society, pro-Russian propaganda inadvertently hurts the development of a legitimate separatist movement in the city. Groups like the Odessa Underground, which still promote “Novorossiya” and call for opposition to the “fascist junta” in Kyiv, are not finding receptive audiences.

Several factors account for the waning effectiveness of Russian narratives in Odesa. For one thing, the city’s residents are exhausted from the seemingly endless fighting in eastern Ukraine—dissuading them from supporting arguments that sustain the conflict. At the same time, known pro-Russian groups are finding it hard to occupy the media space usually reserved for legitimate opposing voices. That leaves a media environment in which locals either stick to their ideological corners or find information through social media or other means. Either way, pro-Russia narratives end up being what they’ve always been: one-dimensional, highly emotional, and short-lived.

Ruben Gzirian is an Eastern European analyst based in Arlington, Virginia.

Image: Mikheil Saakashvili, the governor of Odesa region, Ukrainian President Petro Poroshenko, and others give a “thumbs-up” to crowds gathered to greet Poroshenko during his August 25, 2015, visit to the Black Sea port city. Credit: Office of the Presidency