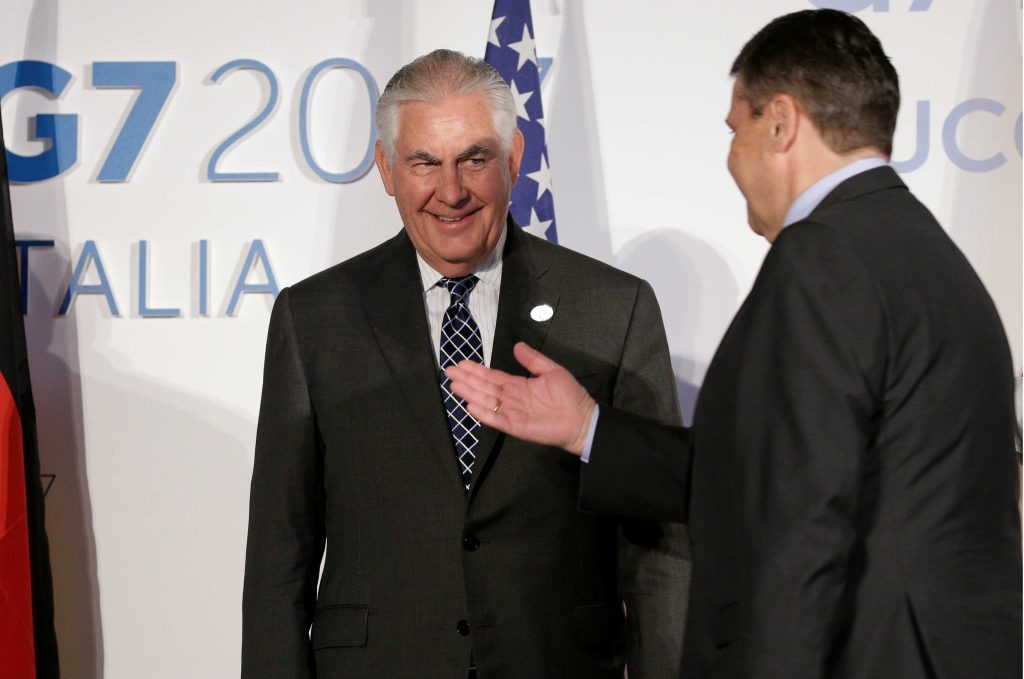 German Foreign Minister Sigmar Gabriel (R) talks with US Secretary of State Rex Tillerson as they pose for a family photo during a G7 for foreign ministers in Lucca, Italy April 11, 2017. REUTERS/Max Rossi 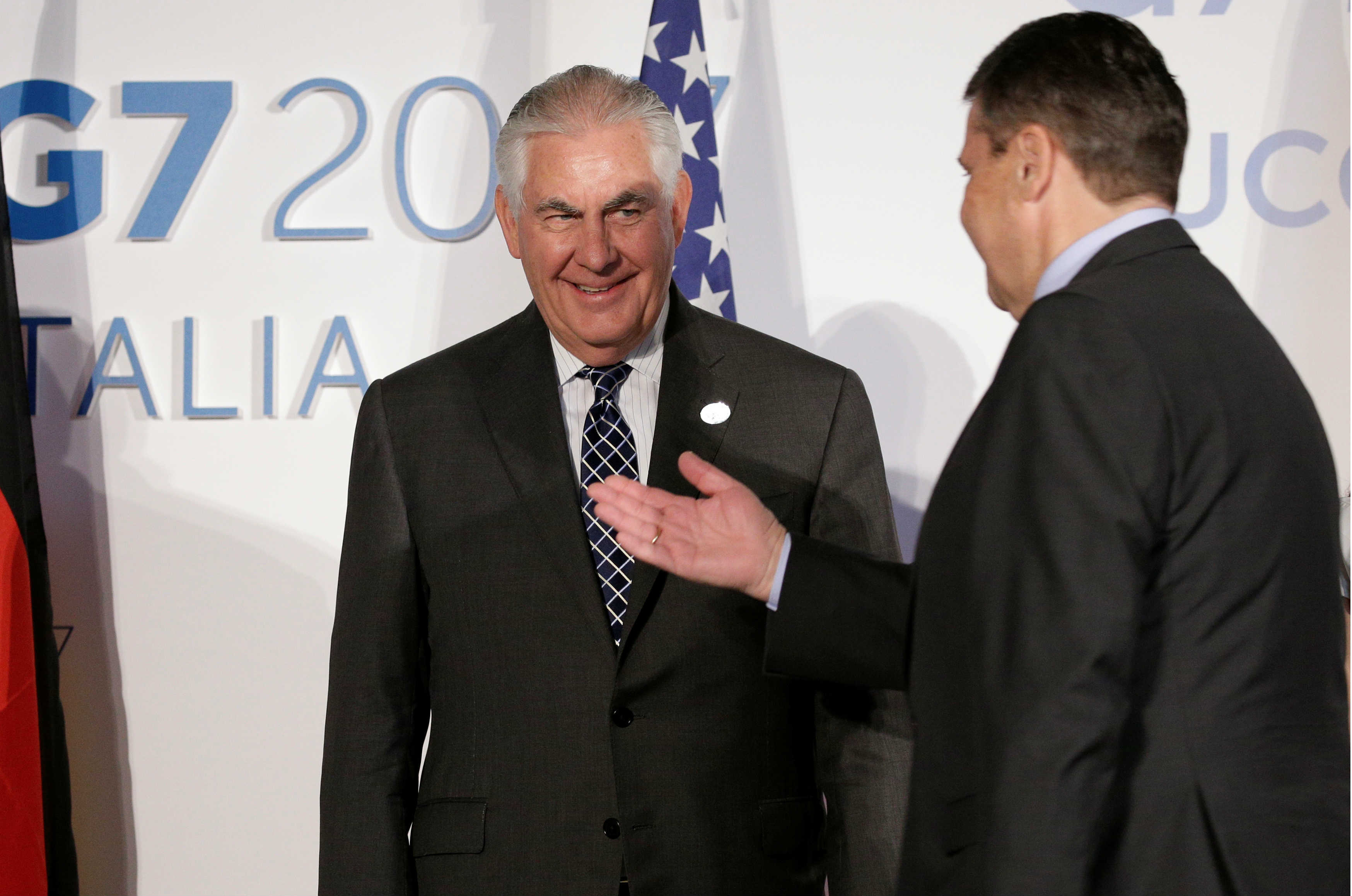 At the Group of Seven meeting in Lucca, Italy, on April 11, US Secretary of State Rex Tillerson asked the other foreign ministers, “Why should US taxpayers be interested in Ukraine?”

US Senator Rob Portman and several other panelists answered that question at an April 5 conference on Ukraine in Washington, DC, sponsored by the Atlantic Council and the Razumkov Centre.

“I believe that corruption and weak institutions fuel the spread of Russian influence both in Ukraine and throughout the world,” Portman said. “Thus, political and economic reforms [in Ukraine] are national security priorities.”

Ukraine’s former Minister of Finance Natalie Jaresko agreed. “Western democracies are waking up to the Kremlin’s efforts to destroy or at least disrupt our liberal democracies,” she said. Examples of Russian influence run in the newspapers every day—from the presidential election in the United States and the vote on Brexit to the upcoming polls in France and Germany—but Ukraine has been at the forefront of the Kremlin’s hybrid efforts for the last three years. Other countries can study the Kremlin’s tactics there, since they are being replicated elsewhere, observers have written.

Plus, said US Senator Amy Klobuchar, Ukraine offers a strong example for other countries that were previously part of Russia’s sphere of influence. And to put it in colloquial terms, Americans broadly support the desire of people to be free, and the struggle in Ukraine is exactly that. “The Ukrainian people are unrelenting in their defense of democracy,” said Klobuchar, and they’ve come a long way.

In the last three years, Jaresko pointed out, Ukraine has turned its economy around, built an independent National Bank, cleaned up its banking sector, massively cut down on opportunities for high-level corruption by reforming the gas sector, and passed judicial reform, all while fighting a war in the east that has killed 10,000 Ukrainians and displaced 1.9 million.

Portman urged the United States and its Western allies to double down on military, political, and economic support for Ukraine. “I remain fundamentally optimistic about Ukraine’s prospects,” he said.

Jaresko, too, has called for greater support. In October 2016, she urged an international consortium of bilateral, multilateral, and private donors to pledge $25 billion for a five-year infrastructure fund conditioned on more structural reform. She said the idea hasn’t gained any traction, pointing to the new leadership in Washington.

“Ukraine can help us make America great again,” Jaresko, an American citizen born into the Ukrainian émigré community in Chicago, said. With its 35 million people, Ukraine offers a market for US products. The country has also been a resolute partner in global security.

Klobuchar said that she’s working with US Senator Lindsey Graham to craft bilateral trade agreements between the United States and Ukraine and the Baltic states. “If we strengthen the economic ties with Ukraine, it will boost both our economies and create jobs in both our countries,” Klobuchar said.

Portman stressed that there is also bipartisan support on Capitol Hill for giving the Ukrainian army both lethal and nonlethal defensive weapons, something the Obama administration resisted; even Tillerson voiced support for this during his Senate confirmation hearings.

But US support can go only so far. The panelists agreed that Ukraine faces serious challenges—not only in defending the eastern part of the country, but also internally. And winning the internal struggle may be as much of a challenge as triumphing against the external threat, said Portman.

However, he believes Ukraine’s reforms are moving in the right direction, pointing to the government’s recent nationalization of PrivatBank, the country’s largest bank, as “an underappreciated example” of the country making the right moves. Another example is the US effort to help retrain Ukraine’s police force. More reforms are needed, he said, and he urged the government to focus on defense reforms and “tangible, visible, and high-impact results” on judicial reforms.

Ukrainians are eager for corrupt officials to be prosecuted. Since the Euromaidan, there have been no high-level prosecutions.

“Everyone expects someone to end up in jail,” Victor Musiiaka, a research fellow at the Razumkov Centre said.

The National Anticorruption Bureau of Ukraine, which brought the charges against the head of the Tax and Custom Service in March, is a new institution and its independence is under threat, according to activists.

Others counseled patience. “In the past three years, Ukraine has achieved more than in the previous twenty-three years,” said Alexa Chopivsky, executive director of the American Center for a European Ukraine. Reforms work when international partners and civil society pressure the government to do the right thing, she said. 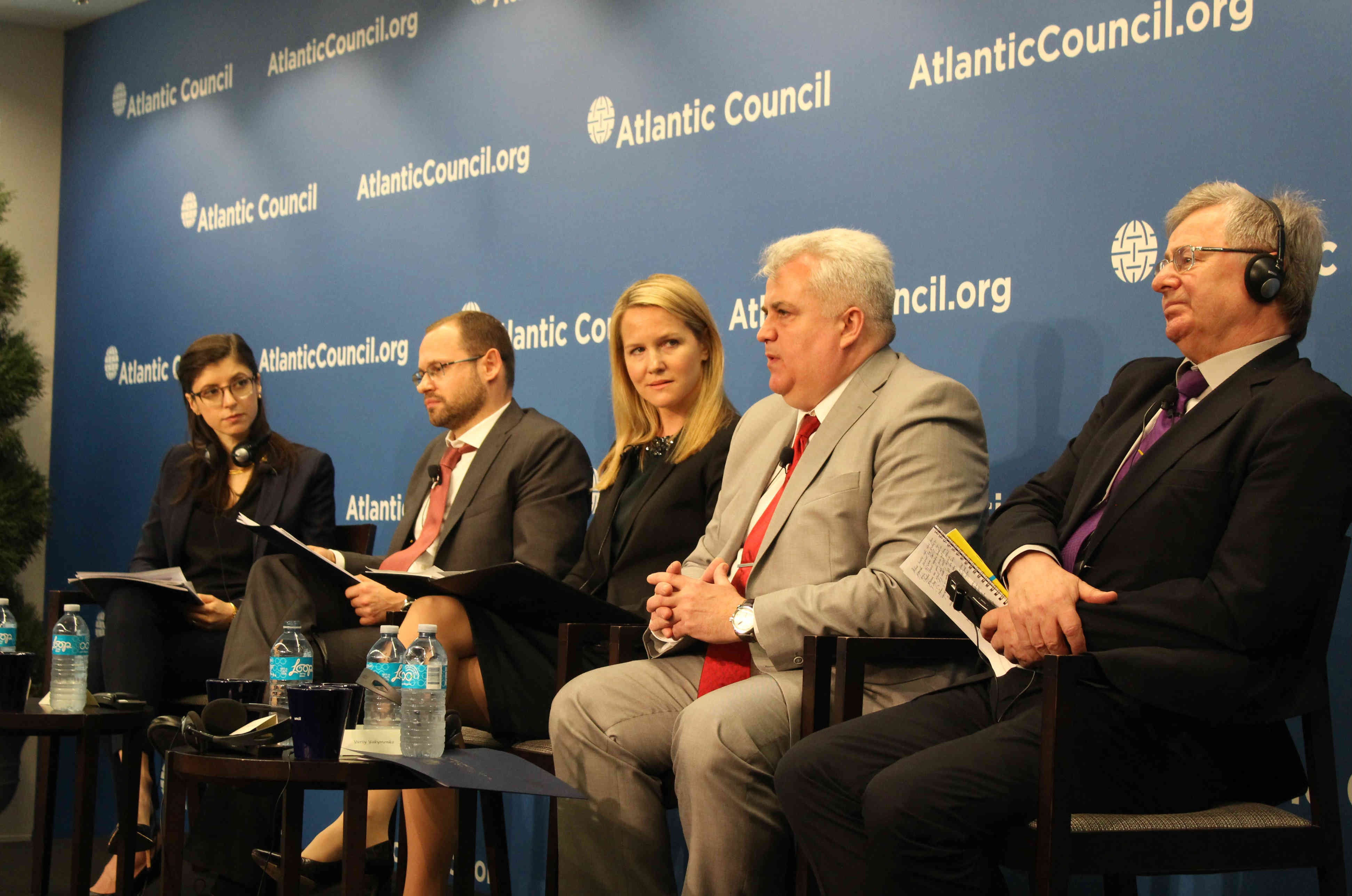 Alina Polyakova (left), the Atlantic Council’s director of research for Europe and Eurasia, moderates a panel on civil society in Ukraine on Wednesday, April 5, at the Atlantic Council in Washington. From left to right, panelists included Paul Pynzenyk, deputy head of the People’s Front Party Political Council; Alexa Chopivsky, executive director The American Center for a European Ukraine; Yuriy Yakymenko, deputy director general and director of political and legal programs at the Razumkov Centre; and Viktor Musiiaka, a research fellow at the Razumkov Centre. Credit: Melinda Haring

But what would be the top reform that would signal that Ukraine is on the right path?

“We have to deal with the courts first,” Musiiaka said, urging a systemic approach.

Chopivsky encouraged the government to pay market level salaries to attract top talent. “Ukraine has talent that’s not being utilized the way it should be,” she said.

Others urged the privatization of Ukraine’s state-owned enterprises. In 2015 or 2016, not a single large state firm was privatized.

The International Monetary Fund recently gave Ukraine its fourth installment of $1 billion in a $17.5 billion package of credits, although it said that future tranches are contingent on pension and land reform. But Paul Pynzenyk, deputy head of the People’s Front Party Political Council, said there is resistance in society and parliament, and doesn’t expect any progress on either issue.

Anders Åslund, a senior fellow at the Atlantic Council, urged Ukraine to sack all of its judges and prosecutors like Estonia, East Germany, and Georgia did. A specialized anticorruption court, as some activists have urged, is not the way to go, he said.

The panelists agreed that there’s no shortage of critical reforms the government should tackle—and soon. “We know what we need to do,” said Jaresko.

Melinda Haring is the editor of the UkraineAlert blog at the Atlantic Council. She tweets @melindaharing. Editor’s note: Watch the conference in full here.