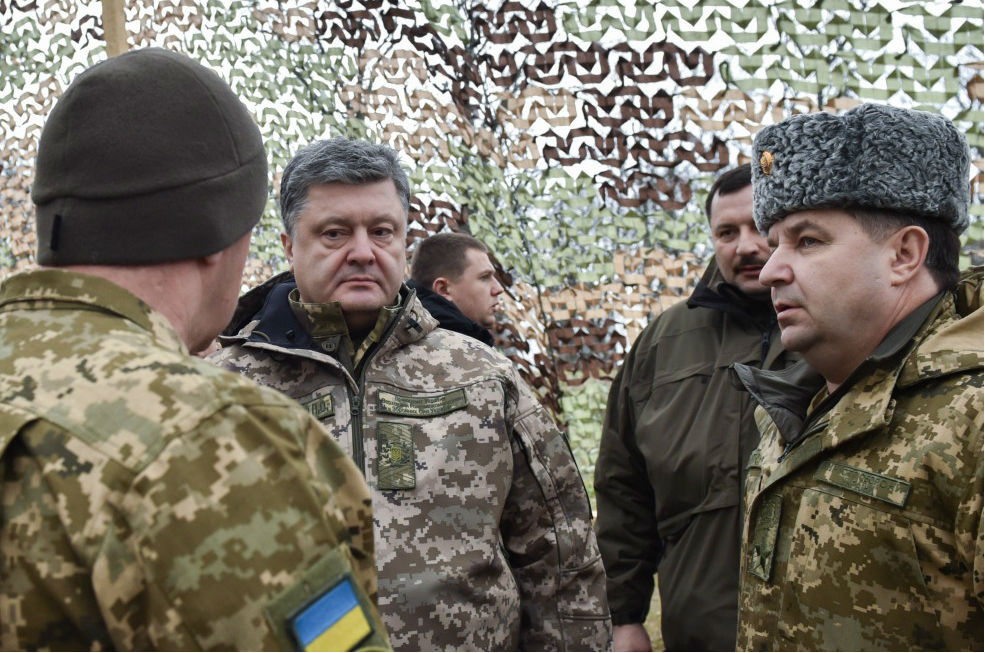 Building Up Ukraine’s Military is the Counterintuitive Solution to Peace

Western policymakers who believe the Minsk accords would work if only Ukraine made the requisite constitutional and electoral concessions are missing a key point: that they, and Russia, forced Ukraine to make security its priority by violating the 1994 Budapest Memorandum on Security Assurances.

Russia brazenly invaded Crimea and eastern Ukraine in complete violation of the memorandum. But the United States and the United Kingdom were also complicit in the breakdown of Budapest: their assurances of Ukraine’s sovereignty and territorial integrity proved hollow. Sanctions are nice, but hardly an adequate response to Russian imperialism.

The violation and non-enforcement of Budapest underpins Ukraine’s approach to the Minsk accords and, indeed, to any peace deal. As constructed, Minsk institutionalizes Russia’s invasion and permanent meddling in Ukrainian affairs. It doesn’t matter whether Ukrainians do or do not make constitutional changes providing the occupied Donbas with autonomy, and it doesn’t matter whether fair and free elections are held in the region. All that matters is that Minsk guarantees that Russia’s proxies will remain in control of the occupied Donbas, and that Russia will remain in control of the Russo-Ukrainian border and will use whatever arrangement exists to infringe on Ukrainian security, stability, and sovereignty.

Needless to say, Ukraine cannot accept such an outcome. It’s one thing for Ukraine to live in the shadow of Russia or to be mindful of Moscow’s security concerns—as it was for the last twenty-five years. It’s quite another for Ukraine’s security and survival to be permanently hostage to an imperialist power that routinely invades its neighbors and has annexed Ukrainian territory.

Since the failure of Budapest means that formal international security assurances are effectively meaningless, Ukraine’s first priority has to be preserving its own security. No one can or will guarantee it, and even if they did, Ukraine would be crazy to believe a second Budapest.

Even if Putin were to sign a document guaranteeing Ukraine’s security with his blood, Ukraine could not accept his word. Mendacity has become business as usual for Russia’s President. But neither could Ukraine accept the West’s word. Its long-standing indifference to independent Ukraine’s security does not inspire confidence that this time the United States and the United Kingdom will really mean it.

Membership in NATO won’t do the trick either, both because it’s not in the cards for Ukraine anytime soon, and because Article 5 is squishy. The first part sounds bold: “The Parties agree that an armed attack against one or more of them in Europe or North America shall be considered an attack against them all.” But the second part adds a qualifier (“as it deems necessary”) that undermines the resoluteness of the first part: “They agree that, if such an armed attack occurs, each of them, in exercise of the right of individual or collective self-defense recognized by Article 51 of the Charter of the United Nations, will assist the Party or Parties so attacked by taking forthwith, individually and in concert with the other Parties, such action as it deems necessary, including the use of armed force, to restore and maintain the security of the North Atlantic area.”

In a word, Ukraine will be secure only if it can guarantee its own security.

Since nuclear weapons are out of the question, Ukraine’s security can be assured only if Ukraine has the requisite armed forces to guarantee its own security. Ukraine must have the capacity, not to defeat Russia, but to deter it from further imperialist encroachments on Ukrainian territory.

Once Ukraine is certain that its security is assured, all manner of negotiations and compromises become possible. Indeed, the Minsk accords become potentially workable. A strong and secure Ukraine might even countenance neutrality.

The implications for the West are obvious. Only a secure Ukraine will put its name to grand bargains crafted by Russia and the West. And a secure Ukraine can only be a militarily strong Ukraine. No Western deal with Russia can possibly work if it fails to take Ukraine and its justified security concerns into account.

Ukraine has already made enormous progress since the spring of 2014 when it had no more than 6,000 battle-ready troops to face Putin and his proxies. Even though the very imperfect “ceasefire” mandated by Minsk is routinely violated by Russian troops and results in daily Ukrainian deaths, it represents a tactical victory for Ukraine’s army. Despite its defeats in several key battles, Ukraine has actually won the war—at least thus far—by stopping Russia’s armed forces and Putin’s 35,000 proxies.

Now Ukraine needs to gain the capacity to stop a full-scale Russian invasion. Although a massive land war would produce savage Ukrainian partisan resistance and lead to enormous losses for Russia, it would be far better to deter Russia than to embroil it in a costly quagmire. And for Ukraine to deter Russia, it needs to have the clear ability to stop Russian air power and tanks.

Arming Ukraine—building up its military to the point that it can defend itself, but not threaten Russia—is the only way to secure a durable peace there. The sooner the West learns this lesson, the sooner Budapest will fade as a bad memory—and the sooner Minsk or its successor will have a realistic chance of resulting in peace.