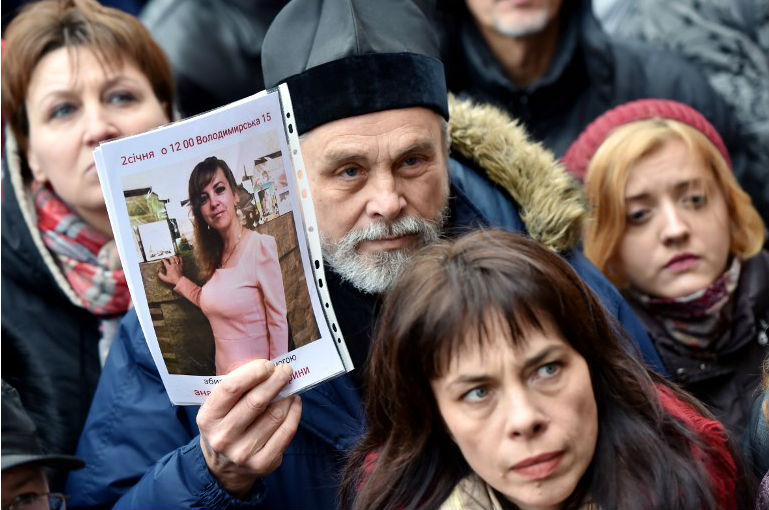 The holiday season ended abruptly on January 1 as Ukrainians learned about the murder of lawyer and human rights activist Iryna Nozdrovska. This is a gruesome start for 2018, even for a country at war. We stopped having regular New Year’s holidays years ago. Not many felt like celebrating while soldiers were dying in the fight against Russian aggression in the east.

The body of the thirty-eight-year old was found in a river on the outskirts of Kyiv, the Ukrainian capital, on the first day of 2018. She went missing on December 29 after a court hearing in the case of her sister’s 2015 murder. In 2017, Dmytro Rososhanskiy, the nephew of a local judge, was sentenced to seven years in prison for running over Nozdrovska’s sister with a car. But, pulling together resources and drawing on the influence of his family, Rososhanskiy got very close to a pardon. Nozdrovska worked hard to raise awareness of the case, and she received physical threats, but never reported them to the police.

Nozdrovska wasn’t a household name or a prominent lawyer. But her story strikes a chord with every Ukrainian. Her murder tells you everything you need to know about the unfinished business of Ukraine’s Maidan Revolution.

She wasn’t fighting for the conviction of her sister’s murderer; she was only fighting for Rososhanskiy to remain in prison and not be pardoned just because he had a well-connected family. It is not an unusual case either; there are dozens of incidents like this that happen across the country on any given month: people commit grave crimes, get convicted, and then walk away free with the help of their wealth and connections. This story just happens to encapsulate the worst nightmare of most Ukrainians: accidentally crossing someone with the “right connections.”

Ukraine, like most countries in Eastern Europe, including Russia, is one where justice is available to those who are rich and well-connected. Courts sell services to the highest bidder and law-enforcement is not designed to be effective, but as a corrupt instrument to share power between bureaucrats and business interests. Laws do exist, people get convicted, but they get off thanks to well-oiled connections or lawyers who bend the law to their client’s benefit. A regular citizen who can’t afford the same luxury lives in a state of permanent insecurity. This is the persistent feeling one has growing up in Eastern Europe.

What makes Ukraine different from the rest of the region is that this kind of situation doesn’t cut it anymore. The Nozdrovska murder provoked an earthquake of public anger. From live news coverage to social media, this is all that people discuss. Hundreds protested at the local police office in downtown Kyiv, forcing officials to respond. Ukraine’s Interior Minister promised “personal control” over the investigation. But we’ve heard these empty promises before.

Just a couple of weeks ago, the murderer of Vyacheslav Veremiy, my Ukrainian colleague and a Kyiv journalist at Vesti, walked away with a suspended sentence. The investigation into the high-profile assassination of Pavlo Sheremet, another colleague and top-notch journalist, has made zero progress after eighteen months and numerous promises from top-officials to take personal responsibility for the case. I’ve gotten used to the idea that if I’m ever targeted in Ukraine, either as a journalist or a gay man, it would be unlikely for my family to get to the bottom of it. But the time to end this endless cycle of impunity has arrived. Seeing large crowds peacefully demanding justice in the Veremiy and Nozdrovska cases makes me believe that I’m not alone in this feeling. Large demonstrations like these never would have happened prior to the Maidan Revolution.

What is happening is closely linked with overall discontent with the governing elites. After three years of an unprecedented reformist drive, President Petro Poroshenko and his ruling party have been rolling back key reforms, including anticorruption reform. Creating an independent anticorruption court will have a positive trickle-down effect for the whole justice system, and it is a demand that Poroshenko has resisted for months. Making it happen won’t be possible without coordinated international pressure.

Nobody is naïve enough to expect that twenty-five years of corruption and incompetence in Ukraine’s justice system will suddenly disappear after a few successful investigations. But some things can help make a crucial leap forward. Ukrainians need to see high-profile people actually go to jail. This still has not happened. Without it, maintaining our hope and inspiration for a much bigger, long-term fight to finally bring justice to Eastern Europe won’t be possible.

Maxim Eristavi is a nonresident research fellow at the Atlantic Council and co-founder of Hromadske International, an independent news outlet, based in Kyiv.

Image: An Orthodox priest holds a photo of murdered Ukrainian lawyer and activist Iryna Nozdrovska as he and several hundred activists rally outside the headquarters of the National Police of Ukraine in Kyiv on January 2. Credit Sergei Supinsky/Kyiv Post