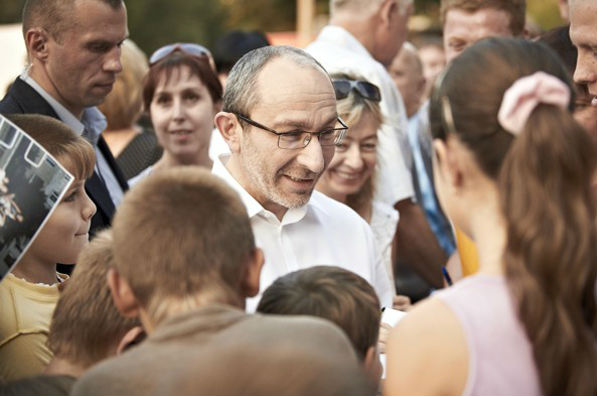 Ukrainians go to the polls on October 25 to elect mayors and city councils. These local elections matter more than one might expect. The likely passage of a constitutional amendment on decentralization by parliament later this year will give the newly elected mayors and councils more autonomy and authority than ever before.

In addition, a new election law changes some rules. The open party list system raises the barrier from three to five percent for representation on councils while simultaneously reducing the number of seats on councils by 30 percent. It also establishes a recall provision for elected officials, institutes a 30 percent quota for women on party lists, and mandates mayoral runoffs in cities with more than 90,000 people.

With the elections two weeks away, here are snapshots of Ukraine’s five hottest races:

1. Kyiv – Incumbent Mayor Vitali Klitschko seeks a second term. However, voters are in a foul mood and the incumbent faces thirty-one opponents. Klitschko hasn’t made any major mistakes, but the voters have not made up their minds about another term for the boxer turned politician. Yulia Tymoshenko had contemplated challenging Klitschko, but ultimately decided to sit out the race, keeping her eye on the Prime Minister position instead. Samopomich’s Sergiy Gusovskiy is Klitschko’s most formidable opponent. Gusovskiy, a city deputy and owner of some of Kyiv’s popular restaurants, is banking on his party’s strong performance in last year’s parliamentary elections to propel him into the runoff. Serhiy Dumchev with the Movement for Reforms is running a vibrant campaign and has momentum. Other candidates include former Prime Minister Yuri Yekhanurov with the Renaissance Party, Gennadiy Korban with Ukrop, former two-term Mayor Oleksandr Omelchenko who maintains some of his core support, and independent MP Boryslav Bereza. Most analysts expect a runoff between Klitschko and Gusosvkiy, with Klitschko delivering the knockout punch in round two.

2. Odesa – Incumbent Mayor Gennadiy Trukhanov faces a rematch with former Mayor Eduard Hurvits. The two squared off last May, and despite an exit poll showing Hurvits leading by seven points, Trukhanov won after a suspicious vote count. Trukhanov, a former Party of Regions Parliamentary Deputy, has consolidated the pro-Russian electorate and relies heavily on the support of oligarch Ihor Kolomoyskyi. Trukahnov’s close business ties with the local mafia give him a solid base of support. His main opponent, 67-year-old Hurvits, doesn’t lack name recognition either. He served as the city’s mayor three times.

Personalities drive politics in Odesa, and both Trukhanov and Hurvits eschew traditional party affiliation. Trukhanov plans to run under his own Belief and Actions Party, while Hurvits will run as an independent. Solidarity’s Sasha Borovik’s entry into the race complicates it, since he’ll compete with Hurvits for the pro-Western vote. Oblast Governor Mikheil Saakashvili supports Borovik, which will cut into Hurvits’s base. But Borovik is virtually unknown in Odesa, so expect a runoff between Trukhanov and Hurvits.

3. Kharkiv – Controversial incumbent Mayor Gennady Kernes looks set to win. His flirtation with separatism, pending criminal charges for his role in pressuring Euromaidan activists, and survival of an assassin’s bullet all seem to add to his allure as polls continue to put him over 50 percent. Though Kernes’s victory in the 2010 race was narrow and likely due to fraud, he has proven himself to be an effective city manager and consolidated his support within the community. His main opponents are two local businessmen: independent and former Deputy Governor Yuri Sapronov, and Solidarity’s Oleksandr Davtyan, who is an oblast council deputy. Both businessmen have plenty of money to compete, but they’re really competing for a special mayor election in the spring, should Kernes be convicted. While the incumbent has managed to delay the court cases until after the elections, an anticipated conviction after New Year’s would remove him from office. Expect to see Davtyan and Sapronov in the spring again.

4. Lviv – Incumbent Mayor Andriy Sadovyi, chairman of the Samopomich Party, is a favorite for re-election. While Sadovyi seeks a third term, he faces some voter fatigue and challenges from both Ukrainian President Petro Poroshenko’s Solidarity Party and the Svoboda Party. Sadovyi’s party refused to support decentralization, which prompted the President’s party to field two Poroshenko faction MPs against him: Oksana Yurinets and Dmytro Dobrodomov. Yurinets is lawyer and journalist, and Dobrodomov is with the small People’s Control Party. Sadovyi’s long standing battle with the Svoboda Party has led former Deputy Speaker Ruslan Koshulynskiy to enter the race. Koshulynskiy enjoys local support and has won respect for volunteering for the Ukrainian military in the Donbas. Sadovyi remains the front runner, even though a runoff is likely.

5. Dnipropetrovsk – Ukraine’s third largest city is home to oligarch Ihor Kolomoyskyi. While Kolomoyskyi’s term as Governor was generally praised, his ongoing battle with Poroshenko makes this race worth watching. Kolomoyskyi’s candidate is independent MP Borys Filatov, who served as Kolomoyskyi’s Deputy Governor, and is running with the Ukrop Party. His main challenger is Opposition Bloc candidate Oleksandr Vilkul, Yanukovych’s former Governor and Vice Prime Minister. In an unusual move, the Solidarity Party is cooperating with the Opposition Bloc to defeat Filatov. Polls show Vilkul and Filatov in a statistical dead heat, which means they’re almost certain to square off again.

Image: Controversial incumbent Mayor of Kharkiv Gennady Kernes looks set to win. His flirtation with separatism, pending criminal charges for his role in pressuring Euromaidan activists, and survival of an assassin’s bullet all seem to add to his allure as polls continue to put him over 50 percent. Credit: City of Kharkiv