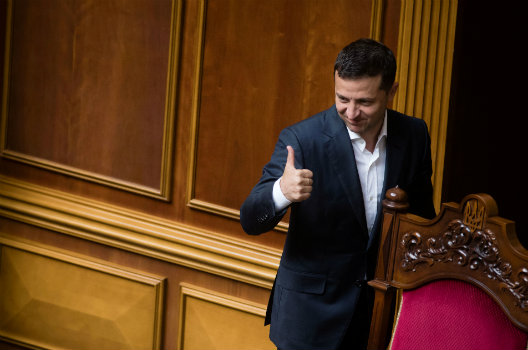 Ukraine may not be the poorest country in Europe much longer if the new president can quickly translate his vision into actual policy. The initial indicators of the Zelenskyy administration’s economic policies are most encouraging. Administration spokesmen have endorsed many of the directions which we as professional economists believe will be most beneficial to the economy and help integrate Ukraine into global markets. Pursuing neo-liberal reforms, from privatization to land market reform, should bring the country out of its historic isolation within the drab Soviet sphere and permit the country to emerge as a substantive player in Europe. While no overnight miracles should be expected, a steady improvement in economic growth, which has already started to emerge, should permit a conversion toward European standards of living.

In terms of the important elements of policy, none is more critical than the firm commitment to fight corruption which has been the cornerstone of Zelenskyy’s political success. The new president has replaced corrupt officials and seems committed to substantial cleansing in the judicial, prosecutorial, and policing personnel. Many governors have been dismissed and numerous officials involved in contraband have been removed. Directives to eliminate regulation that facilitate corporate raidership is another promising start. Establishing the rule of law and eliminating corruption is a key element to promoting economic growth as it is a prerequisite for investor confidence.

The focus on digitization is another promising signal. The new team wants to make extensive use of digital processes for citizen interaction with the government and this should greatly enhance transparency and reduce the opportunity for bribery. Simplifying bureaucratic processes should make business easier, too. Progress in this area could put Ukraine into the forefront as a regional leader and beyond with the abandonment of the archaic administrative processes of the Soviet era which continue to hamper economic activity and promote corruption. Promotion of the digital economy would provide further stimulus to the country’s already vibrant IT sector.

To zoom out to the bigger picture, the stated administration espousal of cooperation with the IMF is a most welcome position. Such cooperation will assure that effective budgetary and fiscal policies are maintained and that an economic reform agenda is pursued. Cooperation with the IMF will provide financial support for Ukraine in the coming years when the country is faced with substantial debt servicing pressures. The hryvnia market is already showing indications of increased market confidence with the currency strengthening against international currencies. International institutions such as the World Bank and EBRD as well as government institutions of the EU or the US generally take cooperation with the IMF as a condition for the provision of investment support. Private investors also use IMF cooperation as an indicator of sound economic policy and reduced risk of investment.

A particularly bold and highly welcome policy is the stated intent of the new administration to open the sale of agricultural land by the end of the year. For eighteen years, the extended moratorium on the sale of agricultural land dampened the potential of one of the most promising sectors of the economy. It has reduced the compensation to millions of impoverished holders of distributed lands. Also, most critically, it has effectively blocked the development of small and medium-sized farms and foreign investment in the agricultural sector. Removing this blockage will unleash a potent force for growth and assist in the advancement of one of the poorest segments of society.

Another critical component of economic reform which has been stated as a goal of the administration is increased privatization of state enterprises. Indeed, ministries are already drawing up lists of state-owned firms to be privatized. Many state enterprises operate inefficiently and drain the national purse. Many operate at a loss due to corrupt management. Closure of some and the privatization of many would provide both budgetary relief and the potential for turning-around operations into productive enterprises. Some strategically critical enterprises, such as Naftogaz, need to remain under government ownership not precluding the privatization of non-strategic components.

Of particular importance is the intent to reestablish a vibrant private banking sector. The credit granting system is currently hampered by the dominance of banks owned by the government which resulted from the past clean-up of the sector. With the removal of the previous, often corrupt, ownership and the refinancing of strategically important banks, these banks are again positioned for privatization. Hopefully, foreign capital can be attracted. With the introduction of private management and banking expertise, crucial financial support of both business and retail activities on solid commercial terms can be reestablished.

A final element of note is the refusal of the new administration to adopt the populist agenda of restricting gas prices below market levels. Such a policy was followed for many decades with the highly negative consequences of creating a highly inefficient and energy import-dependent economy. In addition, the two-level pricing intended to subsidize the residential consumer also greatly contributed to the levels of corruption through pricing arbitrage schemes as well as contributing to large budgetary deficits. While this policy was mostly abandoned by the Poroshenko regime, subsidies still remain and populist politicians espouse further reversals which would have disastrous effects.

In summary, the Zelenskyy administration’s very positive statements, if translated into policies, would open a new era of economic growth and opportunity for Ukraine. But it is essential to move fast and implement these and other policies and avoid the history of earlier “reformers” who talked the talk but couldn’t walk the walk. Now is the time.

Basil Kalymon is professor emeritus at Ivey Business School in Canada. Oleh Havrylyshyn is an adjunct research professor at Carleton University in Canada.