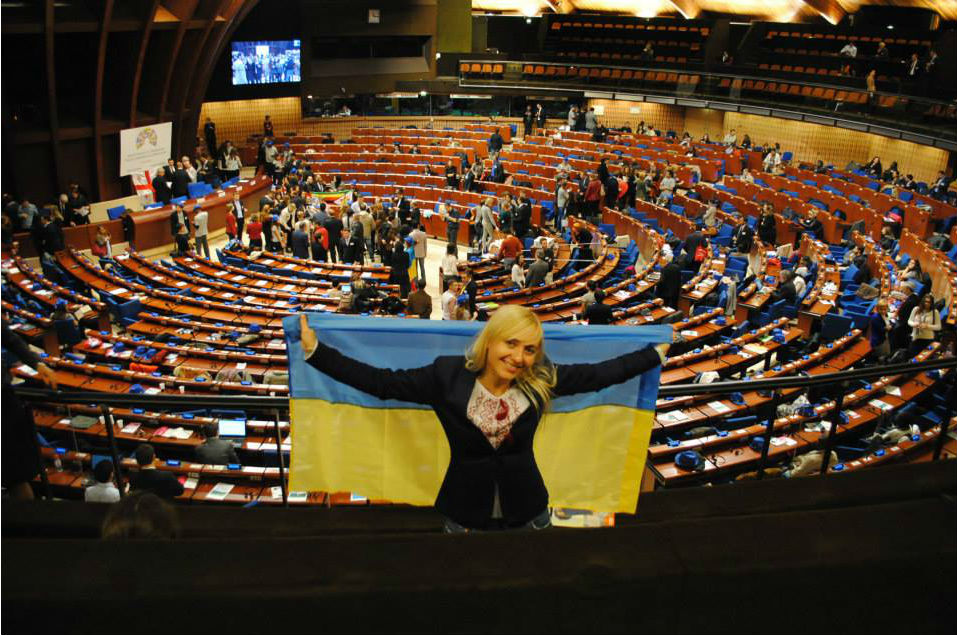 Oleksandra Ustinova does not scare easily. Ustinova—Ustik to her friends—is a member of the board of the most outspoken watchdog in Kyiv and has led lobbying campaigns which successfully pushed through anticorruption reforms in Ukraine. She’s also a recognizable face with her straight blond hair and light blue eyes. Ustinova is used to facing resistance from Ukraine’s corrupt old guard, but she’s still shocked by what she’s seen in recent months: a targeted campaign of intimidation by the powerful Security Service of Ukraine (SBU) against her and other activists.

The SBU has used a number of techniques to intimidate her. Her flight details when she returned from a vacation in Sri Lanka appeared in the media. Only the SBU could know this information; the new aviation security law allows SBU access to passenger information for domestic and international flights in and out of Ukraine. When she returned to Kyiv on May 7, a bevy of “journalists” accused her of leaving the country while soldiers were fighting in the Donbas. Ustinova lost a close friend in the war last year, but when she broke down at the airport, the “journalists” accused her of “learning to cry on camera.”

Her airport ordeal is just the tip of the iceberg. Ustinova says that her e-mails are read. The day after meeting with members of the Parliamentary Committee on Healthcare, the committee chair called Ustinova and described private emails she had exchanged with colleagues about a hard-hitting article on drug procurement corruption she was working on. Most unnervingly, on May 11 video cameras captured the same airport “journalists” at her apartment while she was away.

Ustinova’s thinks the harassment is tied to two recent events. The Anti-Corruption Action Center (AntAC)—she’s on the board there—filed a case demanding SBU staff file their financial disclosures as mandated by Ukraine’s e-declaration law and an article Ustinova wrote on SBU’s involvement in corrupt drug tenders.

Ustinova is not the only AntAC executive targeted by the SBU. On April 9, AnTAC chairman Vitaly Shabunin was the victim of a fake “protest” which—thanks to the creative use of drone technology—activists were able to determine was directed by SBU officer Roman Matkovskiy.

The SBU is not shy about initiating criminal cases based on bogus charges against activists who cross them. On February 1, the Prosecutor General’s Office (PGO) opened a criminal investigation against two health reform NGOs, Patients of Ukraine and Coordination Council of All-Ukrainian Network of People Living with HIV; the directors of both NGOs were then called to the police for questioning. According to Patients of Ukraine director Olga Stefanyshyna, the case is based on the false claim that foreign grants were misused—the same charge the PGO used to target AntAC last year in a case that has since been dismissed.

It’s easy to see why the SBU targets health-sector activists. Ever since pharmaceutical procurement was successfully transferred from the Ministry of Health to international organizations, Ukraine’s corrupt “pharma mafia”—which includes many SBU officials—lost millions in ill-gotten gains. By registering a criminal case, the PGO gained the ability to access all documents from Patients of Ukraine and the Coordination Council as well as to wiretap their staffs’ phones and access their e-mails.

The case could now go one of two ways: it could be dismissed or it could get worse, and the PGO could name Stefanyshyna and Coordination Council head Dmytro Sherembey as official suspects. Like the harassment cases, the West needs speak out forcefully.

Also this spring, the SBU raided the homes of senior managers from YouControl, an online service company providing financial reports on Ukrainian businesses and their owners. Several days later, the SBU came to YouControl’s offices and left with hundreds of documents and pieces of computer hardware as well as cash. A criminal investigation has also begun.

The SBU’s attack on YouControl represents another attack on the e-declaration system, which requires public officials to disclose their assets online. According to Oleksandra Drik, the coordinator of the Declarations Under Control NGO coalition, YouControl makes its data available to anticorruption NGOs and investigative journalists. This allows Drik and her colleagues to verify the e-declarations of hundreds of senior officials—something that the National Agency for the Prevention of Corruption is charged with but has not done.

Misusing the SBU is not a new tactic, says Ukrainian journalist Maxim Eristavi. And it’s “a temptation too big to resist for the majority of local political elites,” Eristavi said in a recent interview. The SBU has an authoritarian legacy dating back to its time as the KGB and possesses a long institutional history of illegal wiretapping, he said. “[T]he biggest constitutional flaw in Ukraine [is] that it puts law enforcement, the SBU, and the army all under direct control of one man, the president,” he said.

While the situation in Kyiv is alarming, all is not lost. Ukraine’s vibrant civil society and media will not permit the president to accumulate the same degree of power that deposed leader Viktor Yanukovych did.

It’s time for the West to stand up for activists like Ustinova, who put regularly put their necks on the line. Western ambassadors as well as the IMF mission director should bring up the SBU harassment cases regularly in private and public, and make clear that future financial assistance depends on respecting the rights of civil society to do its job.