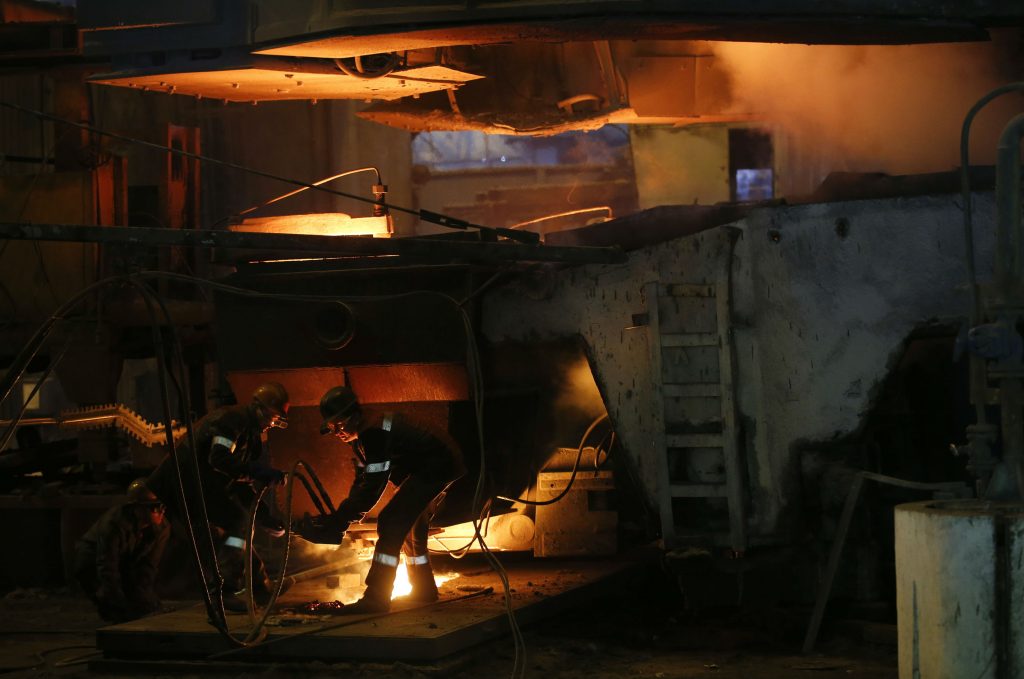 The Achilles’ heel of the post-Soviet oligarchs whose riches come from the acquisition of Soviet-era industrial assets is almost always some dubious mechanism that transferred a factory—or oil company, or mine, or any number of other enterprises—from the state to private ownership. (REUTERS/Maxim Zmeyev)

The Ukrainian government’s well-executed showdown in March 2015 to rein in the country’s wealthiest oligarch is the first of many battles with the oligarchs that lie ahead. In the battle with the oligarchs, President Petro Poroshenko—the owner of Roshen Confectionery Corporation and an oligarch himself—is uniquely positioned to fight. The President and his reform-minded parliament will need all the help they can get when they face their likely next opponents: Rinat Akhmetov and Dmitro Firtash.

Rinat Akhmetov owns Metinvest, a steel company headquartered in Donetsk with over three hundred thousand employees. But he’s got cash problems. Forbes reports that Ukraine’s richest man lost over $5.8 billion in 2014 because of the war in the Donbas and change of power in Kyiv. Akhmetov’s steel company has defaulted on its debts and now is in talks with creditors to cut a deal. In addition, Akhmetov’s DTEK, the largest power company in Ukraine, is seeking to restructure $200 million in bonds to repair damaged plants and mines in the occupied parts of eastern Ukraine.

Akhmetov’s cash flow problems are the least of his worries. Poroshenko and the other oligarchs view him as a top target and stand to benefit from his bad fortune. As part of the deal to cut Kolomoyskyi’s down to size, previous privatization deals that benefited Akhmetov are now up for review and possible cancelation. Akhmetov won tenders for Ukrtelecom, the telecommunications giant, and Dniproenergo, the country’s electrical energy producer, at rock-bottom prices. The companies are likely to be at the top of the government’s list for reexamination, since Akhmetov got sweetheart deals for both.

Many of Akhmetov’s businesses are in occupied parts of eastern Ukraine. On top of his other worries, he’s also juggling competing military and geopolitical interests as the war grinds on. Akhmetov’s bargaining chip are his coal factories, which supply a critical resource for the Ukrainian state. But for Akhmetov to survive, he must placate both the Ukrainian government and the Russian-backed forces, fend off Kolomoyskyi and other oligarchs that smell blood in the water, and keep his factories working at capacity amid a messy war.

Dmitro Firtash is also at risk. Firtash, one of the biggest players in the Central and Eastern European chemical and energy industry, has plants in Austria, Cyprus, Estonia, Germany, Hungary, Italy, Switzerland, Tajikistan, and Ukraine. His empire employs more than one hundred thousand people and raked in $6 billion in 2012.

In March 2014, Firtash was arrested in Vienna, which shattered the illusion that public relations efforts would protect oligarchs in the West. During the Euromaidan, both Firtash and Akhmetov had their public relations departments working overtime to create the image of them as Ukrainian peacemakers who simply wanted compromise and the best for the country. They actively lobbied the US and EU to convince them that they were doing all they could to get former President Viktor Yanukovych to disavow violence while not fully embracing the Euromaidan’s goals either.

Firtash posted a record $175 million dollar bond and is waiting for Austrian courts to decide on an extradition order to the US, where he faces trial for bribery.

Closer to home, Firtash’s empire is also under fire. In April 2015, Ukraine’s parliament approved measures to make the gas market more transparent and market-oriented to meet European requirements. The measures are sensible, but they force Firtash and his business partner, opposition parliamentarian Sergiy Livochkin, to pay for the transport of gas. The state had been footing the bill. Earlier this month, Naftogaz, the national oil and gas company, began collecting debts owed to it by Firtash’s Ostchem Company, which is one of the major players in the nitrogen fertilizer market. The Interior Ministry also opened abuse of office proceedings against top Ostchem officials. In addition, officials at four of Firtash’s other companies have been accused of embezzling approximately $100 million from the state. What’s more, parliamentary deputy Anton Heraschenko has called on the Prosecutor General’s Office to investigate how Firtash and Livochkin purchased the popular Inter TV Channel in 2013 for $2.5 billion. Heraschenko alleges that Russia helped with financing in a bid for media control.

Akhmetov and Firtash are survivors, yet each is vulnerable. The great Greek warrior Achilles was protected by the gods after his mother dipped him by his ankle into the River Styx. This bath made him invulnerable to harm everywhere except his ankle. Years later during the Trojan War, an arrow fired from the bow of the Trojan Prince Paris pierced Achilles’s weak spot, killing him. The Achilles’ heel of the post-Soviet oligarchs whose riches come from the acquisition of Soviet-era industrial assets is almost always some dubious mechanism that transferred a factory—or oil company, or mine, or any number of other enterprises—from the state to private ownership.

The Ukrainian government is aiming a barrage of arrows at the once-invincible oligarchs in hopes of hitting their weak spots. If enough arrows are fired, some are bound to hit the targets.