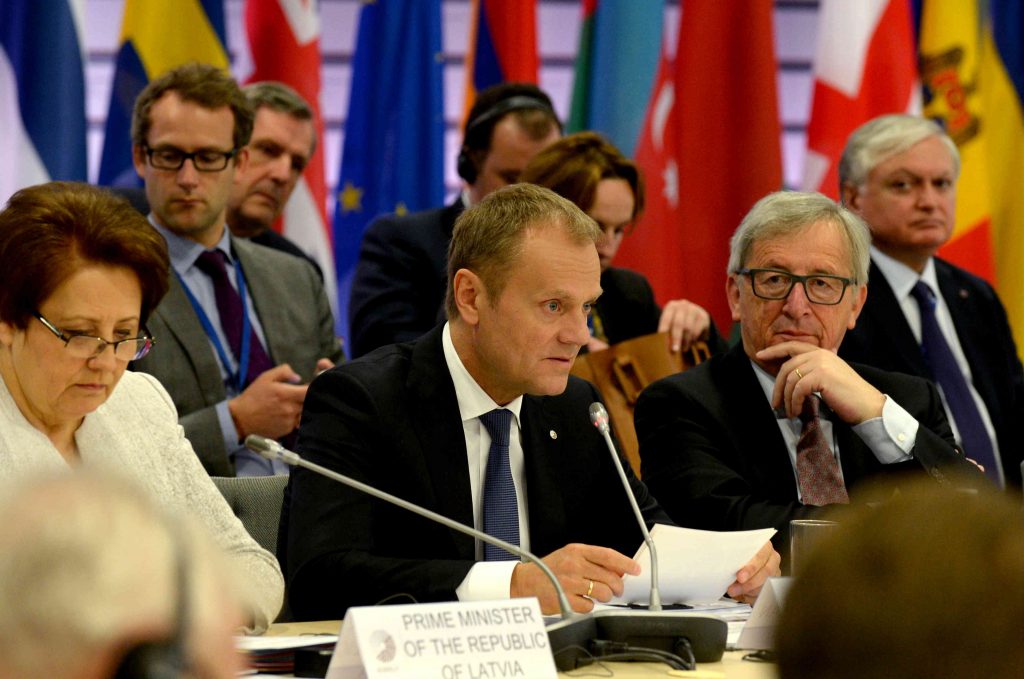 The European Union’s Summit on the Eastern Partnership, held May 21-22 in Riga, was a disaster for Ukraine. For friends of democracy, the rule of law, and Ukraine, it would have been better had this EU summit never taken place and its joint declaration never written.

This summit was expected to be a major embarrassment for the EU, delivering nothing in terms of European perspectives, financial support for Ukraine, freer trade for all, or freer travel. But the outcome was even worse than expected. The Riga gathering backtracked from the elevated Vilnius summit in November 2013, which sparked Ukraine’s Euromaidan.

The thirteen-page joint declaration by the twenty-eight EU heads of state, and representatives of the six Eastern Partnership countries (Armenia, Azerbaijan, Belarus, Georgia, Moldova, and Ukraine) reads like a successful sting operation by the Russian Federal Security Service (FSB). Twenty of the thirty paragraphs contain no substance and would have been better left out, while the remaining ten are nothing short of disastrous.

The most fundamental development in the Eastern Partnership in the last eighteen months was Ukraine’s democratic breakthrough in February 2014. Ukraine has carried out free and fair presidential and parliamentary elections — marking Europe’s greatest democratic achievement in a decade. The joint declaration does not even mention this success, much less congratulate Ukraine. The first three paragraphs praise democracy in perfunctory terms, as would any bland United Nations document. Apparently, the EU summiteers did not care about democracy and freedom.

The second important regional development is Russia’s military aggression against Ukraine. The EU declaration does not mention Russia apart from once when emphasizing “the importance of the EU’s continued role in facilitating gas talks between Russia and Ukraine.” Apparently, the EU sees itself as a trade mediator between Russia and Ukraine. A phrase about the “illegal annexation of Crimea and Sevastopol” is to be found at the end of the fourth paragraph, but it does not name the culprit and does not condemn this act.

Similarly, the EU found no reason to condemn Russian military aggression against Ukraine and thus reneged on the UN Charter, the 1975 Helsinki Final Act, the 1990 Charter of Paris for a New Europe, and the 1994 Budapest Memorandum. This looks like a wholesale EU sell-out of international law.

The big drama in November 2013 was whether then Ukrainian President Viktor Yanukovych would sign the EU Association Agreement. Ukrainian President Petro Poroshenko did so in 2014, and both the Ukrainian and the European parliament ratified it swiftly and simultaneously. But then the European Commission agreed with Russia to delay its application, which amounted to the postponement of vital structural reforms in Ukraine.

The EU summit backtracked further: “Summit participants look forward to the provisional application of the Deep and Comprehensive Free Trade Agreement (DCFTA) with Ukraine starting on 1 January 2016.” How did the application become “provisional?” The next sentence reveals the source, talking about “[c]onstructive efforts in the trilateral consultations on EU-Ukraine DCFTA implementation.” How can the EU and Ukraine have “trilateral consultations”? Again the EU has given in to the unmentionable Russia.

The real trade drama is not the DCFTA but Russia’s severe sanctions against Ukraine. In 2014, these sanctions cut Ukraine’s exports to Russia by half, eliminating 12 percent of Ukraine’s exports. The main reason for the sharp fall in Ukraine’s GDP in 2014 was the war in eastern Ukraine. Needless to say, the declaration did not mention this problem. The EU commits itself to consider Russia’s largely imaginary trade problems with Ukraine, while it ignores Russia’s real trade war with Ukraine.

Ukraine has gone ahead with the most far-reaching economic reform program in its history. The International Monetary Fund (IMF) plays a major role in this reform effort, while the EU is at best a bit player. The long declaration contains virtually no recognition of or encouragement of Ukraine’s impressive reform efforts amid war and economic hardship. The only mention is that “[p]articipants take note of the progress made on energy sector reform in Ukraine.”

The IMF’s Ukraine program is seriously underfunded because the EU lacks interest in contributing more than a pittance of real credits to Ukraine. Neither the underfunding nor Russia’s many demands for debt repayments are mentioned. Ukraine is in a tense negotiation about debt restructuring with its private bondholders and Russia, which is also ignored. Here, the EU could have offered at least verbal support.

The hypocrisy of the EU declaration reaches its peak in the paragraph on security and defense issues. Tellingly the word “defense” is not written out. It might have made this paragraph too embarrassing even for the EU. Ukraine is rightly praised for its contribution “to the EU-led Naval Military Operation and “to an EU Battlegroup in 2014.” But the Russian-sponsored war in Ukraine’s east is not mentioned, and there’s no word about the absence of any EU military support to Ukraine. Hence, Ukraine offers the EU admittedly minor military support, while the EU does nothing for Ukraine.

This disastrous summit would not have happened if the founders of the Eastern Partnership, Sweden’s former Foreign Minister Carl Bildt and Poland’s Marshal of the Sejm Radek Sikorski, had run the show.

Anders Åslund is a Senior Fellow at the Atlantic Council and author of “Ukraine: What Went Wrong and How to Fix It.”