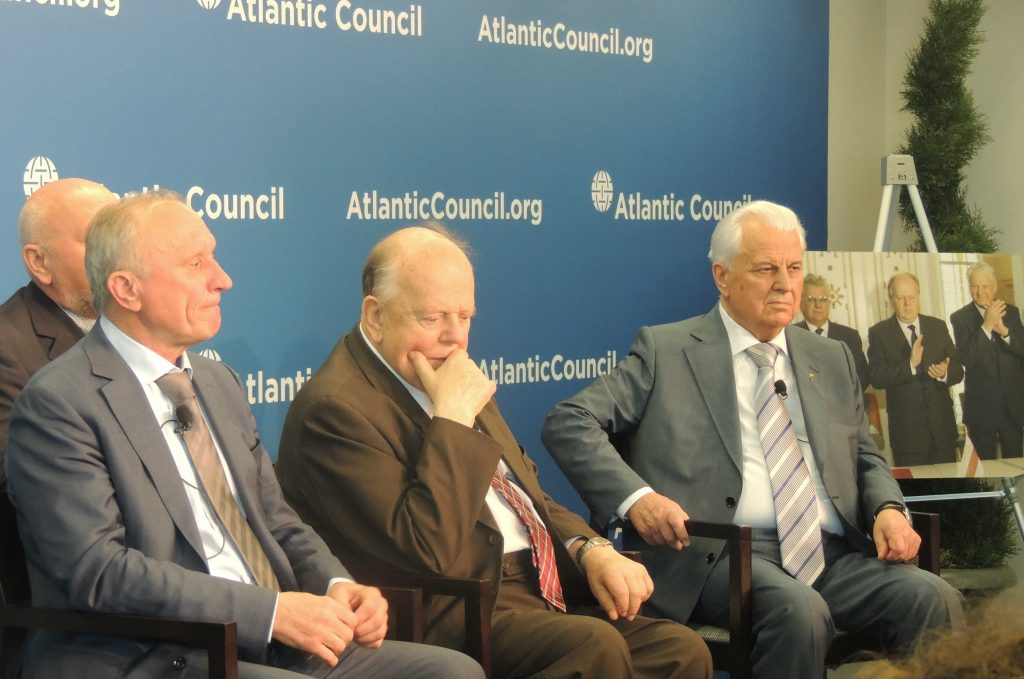 “Today’s world is based on great principles: sovereignty, territorial integrity, and untouchable borders. And as far as I understand the situation, the United States is the guardian of these principles,” said Kravchuk at an event on November 18, in response to a question about US President-elect Donald Trump’s possible plans to recognize Russia’s annexation of Crimea.

“If the nations of the world ever for a second assume that the world powers, and first of all the United States, are going to sacrifice the interest of one nation for other interests, it’s going to be the end of the world order,” he said. He hastened to add, however, that he would not judge Trump’s comments until he becomes president on January 20.

Kravchuk was speaking at the Atlantic Council together with former Belarusian President Stanislau Shushkevich and former Deputy Prime Minister of the Russian Federation Gennady Burbulis. The three men discussed the dissolution of the Soviet Union twenty-five years ago, their roles in that momentous event, and the ensuing challenges in the region. The three agreed that the classic liberal tenets of dialogue, democracy, and respect for international norms are as critical today as they were a quarter century ago.

Kravchuk, Shushkevich, and Burbulis all helped create the seminal Belavezha Accords, which effectively dissolved the Soviet Union and established the Commonwealth of Independent States. They were written and signed on December 8, 1991, in Belarus’s Belovezhskaya Pushcha.

Shushkevich told the story of how the accords came to be. He had invited Russian President Boris Yeltsin to a hunting lodge in Belarus in order to lobby for an increase in the country’s oil and gas supply. Yeltin’s deputy, Burbulis, was also there, as was Kravchuk. Out of the blue, according to Shushkevich, Burbulis suddenly said, “Would you guys agree to sign a sentence which would state that the Soviet Union as the subject of international law is ceasing to exist?”

The Soviet Union had long been falling apart, and Yeltsin agreed, Shushkevich remembered. Yeltsin added, though, that the small group would need to explain to the world that the new commonwealth would fulfill all of its international commitments and obligations, respect human rights, and establish transparent borders. Policy experts worked all night to perfect the document’s language, which was agreed on by consensus.

“The very fact that we have adopted it by consensus was also very significant because before they had the Soviet tradition, there was so-called democratic centralism [in the Soviet Union] where the majority rules and the rights of the minorities were not respected at all,” said Shushkevich. “I’m very proud we introduced the tradition of consensus.”

In Shushkevich’s telling, Yeltsin was assigned to call US President George H.W. Bush, and quickly spoke to him about the new agreement before Shushkevich himself had a chance to talk to Soviet Union President Mikhail Gorbachev. “When I conveyed the message to President Gorbachev, he—with this kind of denigrating tone—told me, ‘You have no clue about how people do international relations,’” said Shushkevich. “And then I told him, ‘President Yeltsin has already called President Bush and he’s already approved our decision.’ And from that moment, Gorbachev started to talk to me in the formal ‘you,’” the pronoun used by Russian speakers to connote distance.

Kravchuk emphasized, however, that the meeting and the accord did not occur as easily as it appeared. History had been moving in that direction for years, perhaps decades, as Ukraine struggled under the thumb of the Soviet Union. “It was a long road we have walked toward to Belavezha,” he said. “It was not by accident; it was our deliberate choice because we had no other option.” And yet, he added, when the people influence the course of history, it can move very quickly and unpredictably.

At the time, Kravchuk said, Yeltsin and other Russians seemed respectful and curious about the newly independent Ukraine. When a journalist asked Yeltsin in 1992 whether Russia and Ukraine were planning to fight one another, “he got up and asked, ‘Are you crazy?’ And he started to explain how closely we are tied, our two nations,” said Kravchuk.

Of course, even then, Ukraine was viewed as somewhat subservient to Russia, he said. “Every time when Ukraine was trying to state its own policy, including foreign policy, our relations would get worse immediately—like it happens now.”

Now, however, Ukraine has decided upon its course. “We have declared that we’ve chosen a European path and we’ll build a new democratic path, and one cannot push Ukraine from this path it’s embarked on,” Kravchuk said determinedly.

He rued the fact that the Budapest Memorandum—an international agreement giving Ukraine security guarantees in exchange for its nuclear weapons—no longer seems to be valid. Apparently, he said, “Russia prefers to use force. Through its entire history, Russia has been fighting a war. And I can assure you that to take the road which implies the use of force is a dead end.”

Burbulis agreed. “Everything that happened in Crimea and Ukraine radically contradicts the spirit and the essence of the Belavezha consensus,” he said. “Article #5 in our agreement sounds almost verbatim as following: the parties shall respect territorial integrity and border of each other, and commit themselves to protect them and to secure the transparency of information through these borders.”

Burbulis explained that he is a huge believer in respectful communication and consensus-driven decisions. “I’m deeply convinced and insist that there is no other option in the entire world than dialogue. It is a different culture of mutual relations, not based on the rule that I am stronger and you are weaker.” That, he said, is the real legacy of the Belavezha agreement.

Amanda Abrams is a freelance writer living in Durham, NC.