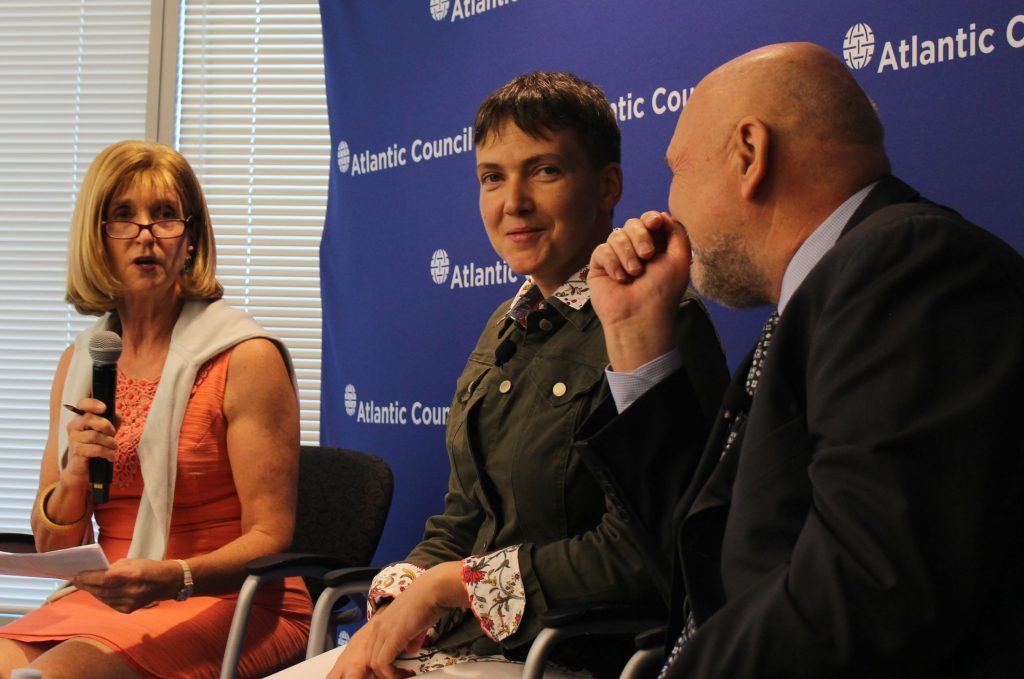 “Russian propaganda made the mistake of using me as an example, and I just became too expensive for them. I am a person who never gives up,” said Nadiya Savchenko, a former prisoner of war, current member of Ukraine’s parliament, and one of the country’s most popular politicians, on September 22.

Three days earlier, the Atlantic Council gave Savchenko its Freedom Award in New York City. The award had been bestowed in 2015 and accepted by her sister Vera while Savchenko was being held in a Russian prison on trumped-up charges. She was released on May 25 and arrived in Kyiv to a hero’s welcome.

In a wide-ranging discussion at the Atlantic Council in Washington, DC, the pilot-turned-politician urged the international community to fight to free every single Ukrainian locked up in Russia. “I was not the only prisoner in a Russian jail. I would like you to continue this struggle to support my colleagues who are still there,” Savchenko said. According to the Let My People Go Campaign, there are at least twenty-eight Ukrainian political prisoners behind bars in Russia.

Bringing attention to the fate of Ukraine’s prisoners has been a persistent theme since her release, and she has urged President Petro Poroshenko to focus on the issue. “It is important for [Russian President Vladimir] Putin to understand he has no chance of keeping any of the Ukrainian prisoners currently being held—illegally—by him,” said Savchenko.

Since her release, she has thrown herself into her new duties as a parliamentarian, running on energy drinks, cigarettes, and little sleep. Before being captured by Russian-backed separatists, Savchenko was a pilot and creature of the army. She now favors tailored vests and smart boots, answers questions about other politicians diplomatically, and exudes a sense of urgency.

While Savchenko was held in prison, she gained near mythical status; some compared her to Joan of Arc. When she returned to Ukraine, she was suddenly the most popular politician in the country. Initially, she did not hesitate to criticize anyone and refused to bow and scrape to the political establishment.

At the Atlantic Council, Savchenko exhibited some of her trademark audacity. She reminded the audience that she doesn’t represent a particular constituency but rather all of Ukraine, which gives her the freedom to pursue big issues. Her experience in the army and in a Russian jail gives her a unique vantage point. “I’m the only deputy who has experienced Russian aggression first hand,” she said, adding that she’s also one of the only people who really knows what’s going on in the army and what needs to be reformed.

Savchenko said that the Ukrainian government will “evolve” only if the people push for it. “Nothing is going to happen in Ukraine if the Ukrainian people don’t exert pressure,” she said.

When asked about the current government’s performance, she used the word недопрацьовують; while difficult to translate, it means the government does not “work to the end” or “far enough.” But Savchenko backed away from criticizing more pointedly “until I myself have made more of a contribution.”

She hit the expected talking points on the war in eastern Ukraine, urging a renewal of EU sanctions and thanking the US for its support. And she made the case for targeted sanctions against kleptocrats in Russia. If you freeze their assets, they will pressure Putin, she said, because fear and money drive the regime. “The Kremlin is guided by a sick idea of restoring the territories of the USSR,” she said. “Russia will never stop until its regime is changed, and that’s not going to happen anytime soon.”

Savchenko has ideas about how to bring peace to Ukraine as well. While the Minsk II ceasefire agreement “isn’t a bad idea, it’s a completely unrealistic approach,” she said. Introducing autonomy and self-government for eastern Ukraine alone is “wrong,” she said. “You should introduce it for the whole country.”

When Savchenko offered to negotiate with the Russian-backed separatist leaders in eastern Ukraine, she was criticized as naïve because such talks might enhance the status of those figures.

Whatever one thinks of Savchenko’s statements on reconciliation in eastern Ukraine, there’s no denying that this unlikely politician has raw talent. She answered questions without notes or pauses. Her folksy style—there’s no Ukrainian idiom she doesn’t know—and piercing blue-eyed gaze give her a serious but approachable air. She is quick to smile and crack a joke.

“Every person has potential to change things,” Savchenko said—a good reminder to Kyiv’s political establishment and to all of us.