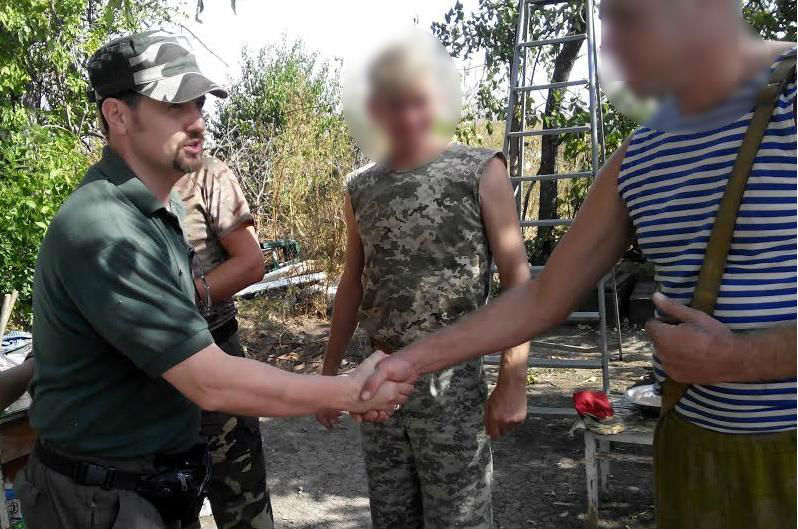 For a brief moment, it felt like déjà vu. As an officer with the Canadian Armed Forces, I visited several hot spots, witnessing my share of misery and destruction. Now I am in the Donbas, the war-torn region of eastern Ukraine.

Since its independence in 1991, Ukraine has struggled to shed its Soviet colonial past and the remaining vestiges of Russian domination. It seeks to join Europe and the world of free nations. The Euromaidan’s Revolution of Dignity transformed the country by removing a corrupt dictator and bringing to power a government committed to anchoring Ukraine firmly within the Euro-Atlantic community. Russia responded by resorting to war. It officially annexed Crimea, and then de facto invaded portions of eastern Ukraine. Eighteen months later, entire villages and cities have been destroyed, almost 8,000 lives have been lost, and another 30,000 have been wounded. More than 1.5 million internal refugees have been displaced.

Yet Russia’s war in Ukraine no longer dominates the international headlines. The Minsk II agreement brought about a suspension of major conflict. Many in the West now trumpet an apparently successful round of talks between Ukraine and Russia on October 2 in Paris. From the ground, however, there’s little evidence of an enduring ceasefire, much less peace. Along the stretch of the frontlines that I visited over a five-day period, starting in Mariupol and moving north, the Ukrainian side remains under attack.

“Although heavy equipment has been pulled back, it’s rare for us not to take fire from the other side on any given day, including from mortars, automatic weapons and snipers,” a Ukrainian Special Forces platoon commander told me on October 4. “We also continue to engage enemy’s reconnaissance groups and intercept saboteurs, who often place anti-personnel mines on our territory. Our military, and even local civilians, continue to sustain casualties.”

Nevertheless, the esprit de corps and combat readiness of Ukraine’s troops remains high. Natan, a Ukrainian-Jewish field commander and former Israeli military officer, rattled off a list of the forces’ significant accomplishments: they have challenged not only Moscow-sponsored separatists, but also Russia’s elite forces. A year ago, I met highly motivated but ill-equipped and underprepared youngsters from the Maidan protests who enthusiastically joined volunteer battalions. Today it’s hard to recognize the same soldiers, who gained experience and are battle-hardened members of the regular forces. These troops are better equipped and trained as well, thanks to support from the US and Canadian governments in part. But they “still have a long way to go to become a first-class modern military force,” Natan points out.

Putin’s war in Ukraine remains the world’s biggest geopolitical threat, according to the US Secretary of Defense and the Chairman of the Joint Chiefs of Staff. It’s hard to disagree. Russian President Vladimir Putin’s performance at the UN General Assembly in late September demonstrates that he has not been swayed by the sanctions imposed by the West or political isolation either.

While things have been relatively quiet on the frontlines since September 1, Ukrainian field commanders are convinced that it will not last.

“The Russians will push forward. Only force can stop Putin. He will engage in meaningful negotiations with Ukraine and the West if and only if he is compelled to do so,” I was repeatedly told.

Putin is using the lull in fighting to further consolidate his forces in the Donbas, making preparations to occupy more sovereign Ukrainian territory. And then there’s a possibility that the Kremlin may launch a blitzkrieg into the Baltic states and other NATO-member neighbors.

In spite of Putin’s aggression, decision-makers in Brussels and Washington insist that Kyiv follow the Minsk II ceasefire agreement, while Moscow violates it time and time again. Putin, in turn, appears immune to the political and economic pressure applied by the West and to the token transfers of additional NATO resources to Eastern Europe. This leaves Ukraine’s troops as the only real force standing between the Russian aggressors and the security and stability of Europe.

Since the conflict began, Ukrainian forces have proven their ability to fight, and, if necessary, make the ultimate sacrifice. What they need to succeed, however, is tangible kinetic military assistance in the form of defensive weapons such as Javelin anti-tank systems and modern equipment like drones. On September 29, US President Barack Obama authorized $20 million to provide Ukraine with long-range counter-battery radars, but this isn’t enough.

“We are not asking for NATO troops to fight in Ukraine,” a military commander in Mariupol bluntly told me. “We only request sufficient supplies of modern weapons to stop Putin before he moves further. Americans give these weapons to many of their allies, so why not to us?”

For our sake, the West must not abandon Ukraine to struggle on its own against the Russian strongman. Expanding our military support to Ukraine today may prevent the West from having to deploy its own troops into harm’s way tomorrow.

Ihor Kozak is an independent defense and security consultant. He advises legislative bodies and governments pro bono, as well as think tanks and media in Canada, the United States, and Ukraine on the Russia-Ukraine conflict.

Image: Many in the West now trumpet an apparently successful round of talks between Russia and Ukraine on October 2 in Paris. From the ground, however, there’s little evidence of an enduring ceasefire, much less peace. Along the stretch of the frontlines that I visited over a five-day period, starting in Mariupol and moving north, the Ukrainian side remains under attack. Credit: Ihor Kozak