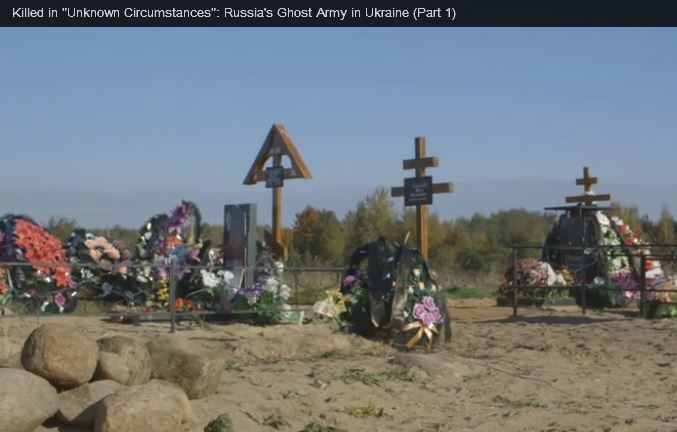 A Vice News Documentary Shows What Russia Is Hiding—and How

Since last summer, when President Vladimir Putin’s government first deployed major units of Russian conventional army troops to fight in its war against Ukraine, the Kremlin has used state secrecy, propaganda, intimidation, and violence to conceal the story.

Police have obstructed journalists, arrested them—and in one case, thugs beat a local newspaper publisher so badly he had to be hospitalized. That publisher, Lev Shlosberg, who also is a local legislator in the oblast (province) of Pskov, is undeterred, appearing this week among other Russians courageous enough to tell reporters from the US-based Vice News about Putin’s secret war.

A three-part video documentary by Vice—its crew crisscrossing Russia from Pskov to St. Petersburg to Moscow and elsewhere—represents one of the most comprehensive reports yet on Russia’s cover-up of its war.

In Pskov, scores of Russian soldiers from Pskov’s 76th Airborne Division have been buried covertly, Shlosberg tells Vice, killed “for Putin, not for Russia.” He adds, “Information about those lost is kept completely secret.”

As for the beating of on Shlosberg after he reported the deaths, “it’s clear that the decision [to order the attack] was made in Moscow by high-ranking officials, and that it was a political decision.”

Kremlin propaganda has created an atmosphere of intimidation in Russia in which the families of soldiers killed are afraid to speak out, Shlosberg has reported for months.

Halfway across Russia, in Samara, the Vice crew finds another cemetery where the grave of Sergei Andrianov is mounded with flowers. His funeral was held in silence, says his mother, Natasha. “We tried getting in touch with his commanders and fellow soldiers, but they refused to tell us anything,” she says on camera. “It’s clear to me now that my son was killed and no one can explain anything to me.”

Natasha Andrianova retrieves the death certificate sent to her. In the space labeled for the place of death, someone has written simply that he died “at the place of his temporary posting.” Attached to the certificate is another paper certifying recording only that the body was transported across the border into Russia on its way home.

The Truth is Known; It’s Simply Not Spoken

Andrianova says she wants to question Russian officials about this, but only if she can be one among many people who do so. “I don’t want to do it on my own,” she says.

And in that, perhaps, is the real news from Vice’s report. The presence of Russian troops—and for unknown hundreds of them, their deaths—in the Ukraine war is for very many Russians not a secret at all—but is rather a truth that, under the intimidation and coercion of the state, must be treated with silence.

The official government line is that all the Russian fighters in Ukraine are volunteers, and allegations that Russian troops are in Ukraine are lies spread by Russia’s enemies. Dmitry Gudkov, one of a tiny handful of opposition members of Russia’s parliament, the Duma, says that even there in the nation’s legislature, “nobody believes that story.” Rather, “everybody is either playing their role or is simply keeping silent.”

Russian Marine, Home From Ukraine War, Says ‘A Lot of Russian Military’ Are Fighting There  (Jan. 29, 2015)

Russians Protest Putin’s War, But Ukraine Is on Its Own(includes 10 ways in which the evidence—much of it from Russians themselves—refutes Putin’s claim he’s not making war on Ukraine – Sept. 22, 2014)

Image: A Vice News documentary shows graves of Russian soldiers in the region of Pskov who were killed when their unit was deployed into combat in Ukraine. (Vice News video)