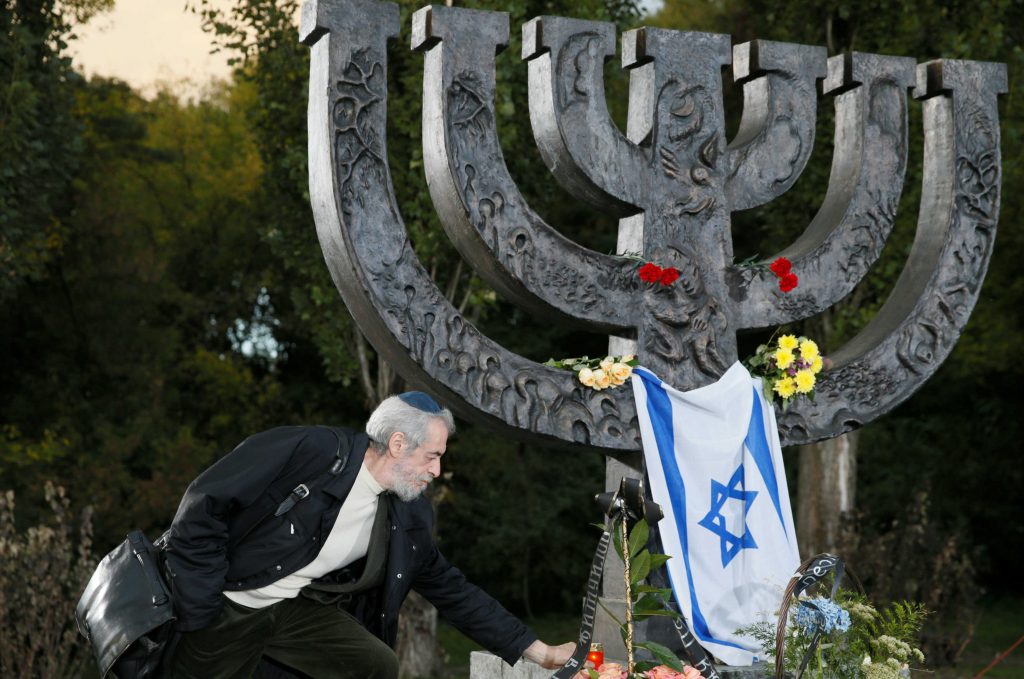 A man places a candle as he attends a ceremony near a monument commemorating the victims of Babyn Yar, one of the biggest single massacres of Jews during the Nazi Holocaust, on the outskirts of Kyiv, Ukraine, September 29, 2016. REUTERS/Valentyn Ogirenko

“No gravestone stands on Babyn Yar,” wrote the Soviet poet Yevgeniy Yevtushenko in 1961. He was condemning the Soviet regime’s failure to acknowledge the Babyn Yar tragedy twenty-five years after World War II had ended. When a monument was finally erected in 1974 to commemorate the deaths of 100,000 people generically characterized as “Soviet citizens,” no mention was made of the 33,771 Jews who perished there on September 29 and 30, 1941. When the surrounding park was established in 1980, Babyn Yar quickly grew into a popular recreational area rather than a place to remember those who had been killed.

Not until the fall of the Soviet Union and the birth of an independent Ukraine was the Jewish identity of the victims acknowledged and a Menorah monument built on the site. The opening of several independent Judaica centers, as well as twelve private Jewish history museums all over Ukraine, helped return the lost page of the Holocaust to Ukraine’s historical narrative. As has been argued by former US ambassadors, Ukraine has done “an admirable job of containing the intolerant demons of its not-so-distant past,” re-opening dialogue between ethnic Ukrainians and Jews and dispelling speculations of Russian propaganda about Ukraine’s anti-Semitic, neo-Nazi, and neo-fascist nature.

Commemorations of Babyn Yar take place annually, but this September marks the event’s seventy-fifth anniversary and the country’s political leaders, academic community, and civil society groups are honoring the victims on a grander scale than ever before. In response to President Petro Poroshenko’s decree on the tragedy’s anniversary, various ministries and state institutions have held a series of events at the state and regional levels.

Nongovernmental organizations’ programs are similarly impressive. The Ukrainian Jewish Encounter has organized a week-long program, including a youth conference, public symposium, concert, and international competition for a landscape design that proposes to transform Babyn Yar into a memorial to honor the victims. The Pinchuk Art Center is displaying works of art as part of the show “Loss. In Memory of Babyn Yar,” while the Kyiv Municipal Museum carries a new exhibit on the tragic fate of Kyiv’s Jews during the war.

Acts of remembrance are not only taking place in Kyiv. “Every big city in Ukraine has its own Babyn Yar,” argues Yehor Vradiy of the Tkuma Ukrainian Institute for Holocaust Studies. In early September, thousands attended the opening ceremony of the Jewish memorial in downtown Lviv, where almost 100,000 Jews—one third of Lviv’s total population—lived before World War II. The “Space of Synagogues” project started in 2008 and was completed thanks to a private-public partnership between the city of Lviv, the Center for Urban History of East Central Europe, and Jewish organizations in Germany, Israel, and the United States. Similarly, in Lutsk, where Jews made up 80 percent of the total population before 1941, the local community held a commemorative ceremony to remember 17,000 Jews who were killed in September 1942 during the German occupation. It is by engaging in these acts of remembrance that Ukraine is building a more modern, tolerant, and European state.

The public symposium organized by Ukrainian Jewish Encounter has brought to Kyiv a great number of international historians, archivists, and experts. While acknowledging the tremendous importance of large-scale commemorations of Babyn Yar’s seventy-fifth anniversary, participants expressed concern that their efforts will evaporate the next day, and that a full-scale understanding of the tragedy of the Holocaust will not grow roots in Ukrainian society at large.

With this in mind, the following recommendations should be acted on to ensure that Ukraine successfully builds upon what has been achieved during these past few weeks.

First, the government of Ukraine should take legal steps to clearly delineate and officially protect the territory of Babyn Yar. Its recreational or commercial use should be strictly prohibited in order to honor the memory of the thousands of people murdered there during the Holocaust.

Second, Ukraine’s political leadership should deliver on its promise and invest one million dollars to create a new memorial on the site that commemorates the people who perished there. The Ministry of Culture should follow the path of the award-winning POLIN Museum of the History of Polish Jews and allocate funds to open a National Museum of Ukrainian Jews. Such a museum would finally acknowledge the Jewish population’s tremendous contribution to Ukraine’s industry, economy, culture, and arts.

Third, research on Babyn Yar and the Holocaust should be prioritized by Ukraine’s Ministry of Education and Science. Additional state scholarships should be provided to encourage linkages between scholars and history museums.

Fourth, Ukraine’s research institutions should double their efforts to disseminate the results of their research and make it available to a broader audience. Historians, archivists, educators, and the media should promote reflection upon the key moral questions raised by the Holocaust. That is the important element of strengthening Ukraine’s pluralistic democracy.

Most important, the decommunization laws that have been adopted in the area of archives openness should be acted upon. Specifically, the memorandum of understanding signed in May by the State Archives of Ukraine, the State Security Service of Ukraine, and the United States Holocaust Memorial Museum should be implemented without any further delays. It allows the creation of digital archives on the history of Ukrainian Jews during the Soviet period and authorizes opening them to researchers all over the world. This truly unprecedented commitment to studying the Holocaust and sharing information will help Ukraine’s leaders offset the negative effects of the Russian propaganda machine.

Finally, studies of the Holocaust can contribute to Ukraine’s own cultural revival and attractiveness to tourists, and local authorities should develop better infrastructure to welcome thousands of Jews of Ukrainian heritage who are interested in their family’s history. It is time to think about what kind of welcome they are likely to receive in Ukraine. Will they see abandoned, grass-covered Jewish cemeteries, or will the country’s many Jewish heritage preservation groups clean up the graves, do in-depth archival work to rediscover individual histories of Ukrainian Jews, and help their ancestors connect to their roots by placing “last address” plaques on their long-abandoned homes? These are open questions. It is time the citizens of Ukraine began answering them.