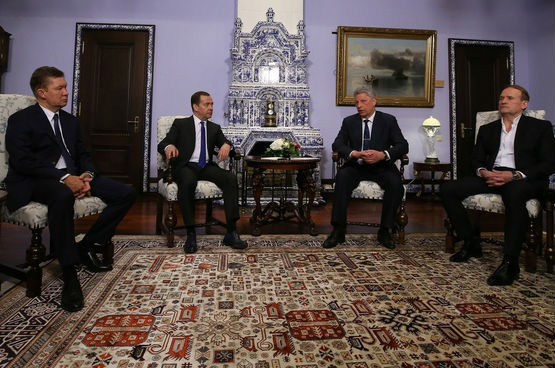 It’s strange for a presidential candidate to visit a leader of a country with which it is at war, but that was only the beginning of this extraordinary meeting, much of which was broadcast on Russian state television. Everything was wrong with it.

Boyko, a former minister of energy under President Viktor Yanukovych, did not go alone. He went together with the real leader of the pro-Russian “Opposition Platform for Life,” Viktor Medvedchuk, a renowned early gas trader and Russian President Vladimir Putin’s closest friend and representative in Ukraine, while Medvedev was flanked by Gazprom’s CEO Alexei Miller. The formal topic was the gas trade between Russia and Ukraine, the main source of corruption in Ukraine.

Medvedchuk was one of the four first people that the United States sanctioned for Russia’s occupation of Crimea on March 17, 2014, one day before Putin annexed Crimea. Strangely, Ukraine has not imposed any restrictions on Medvedchuk. He represents Ukraine in the Minsk group on Donbas prisoner exchanges and he is regarded as the owner of two Ukrainian television channels, 112 and NewsOne, through a middleman.

All participants in the meeting made clear that the Ukrainians took the initiative.  Needless to say, opposition leaders do not travel to a foreign country, and certainly not to an enemy country, to negotiate a gas deal on behalf of their nation in the final days of an election campaign.

Both Boyko and Medvedchuk said they regretted the bad relations between Russia and Ukraine. Neither mentioned Russian aggression against Ukraine. On the contrary, both blamed the Ukrainian authorities. Boyko did not mention the Russian sanctions against Ukraine as the reason for the sharp decline in mutual trade, but Medvedchuk even lied that the Ukrainian authorities had introduced Western sanctions on Russia and poor Russia had only countersanctioned. Neither Boyko nor Medvedchuk had a single negative word to say about Russia as if Ukraine were at fault for everything.

Given that Boyko is a presidential candidate, one would presume that he would take the lead, but after a few sentences at the outset, Medvedchuk took over. Of the twenty-minute televised meeting, Medvedchuk spoke for twelve minutes, showing  that he’s the boss and Boyko is the underling. His speech was a vicious condemnation of whatever the Ukrainian government has done in the last five years. Anybody who watches this video realizes that Boyko is not the real candidate.

Medvedchuk’s long speech was more anti-Ukrainian, anti-Western, and anti-European than one can imagine. His bottom line was Russia and Ukraine must reestablish good relations.

Apart from indulging in how terrible the Ukrainian authorities are, a possible gas deal between Russia and Ukraine was discussed, for which the Ukrainian participants had no mandate. Medvedchuk anticipated that both Nord Stream 2 and Turkish Stream would come on line in December 2019 so that transit through Ukraine would no longer be needed, costing Ukraine 5,000 jobs and $3 billion a year in lost transit fees.

Medvedchuk returned to his old brief when he was a very powerful, independent chief of staff to Ukrainian President Leonid Kuchma, calling for a gas consortium between Russia and Ukraine. Gazprom’s Miller agreed. He claimed that Gazprom was ready to prolong the gas transit contract, which makes no sense with all the new pipelines. Therefore, the whole show did not hang together. If Gazprom has already built these two pipelines, Nord Stream 2 and Turkish Stream, to avoid any transit through Ukraine, why would it suddenly change course? Clearly, it will not. This was just for show to a slim pro-Russian electorate in Ukraine. The depressed face of Boyko illuminated how tiny that constituency is.

At the end, the otherwise ruthless Miller tries to be nice. Although underlining that it is too early to say anything about the eventual price, he claimed Ukrainian consumers would pay one quarter less, which is a dubious claim at best.

This painful and sad Kabuki theater suggests that Moscow has run out of steam in Ukraine’s politics and tries the simplest tricks in the absence of any sophisticated ones. Boyko, who is no fool, probably realizes that this video will offer Ukrainians no reason to vote for him. If this is not treason, what is?

Anders Åslund is a senior fellow at the Atlantic Council and author of the forthcoming book “Russia’s Crony Capitalism: The Path from Market Economy to Kleptocracy.”