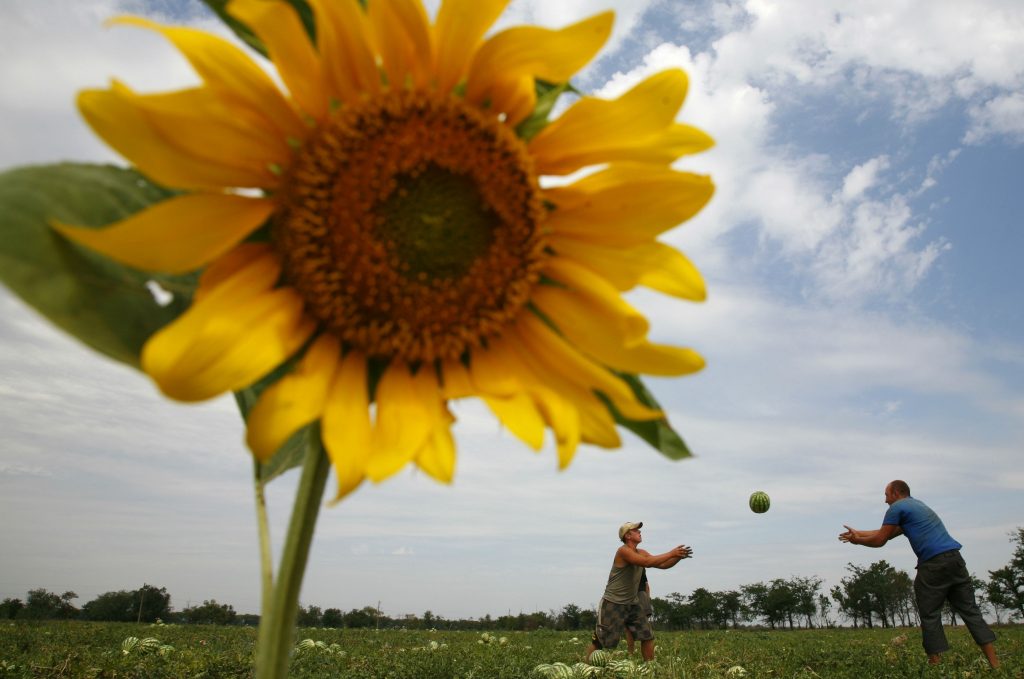 Farmers harvest watermelons on a field near the village of Sofiyivka, some 80 km (50 miles) south of the Ukrainian Black Sea port of Odesa, August 1, 2012. REUTERS/Anatolii Stepanov

Largely in response to the IMF’s condition for further aid, Ukraine is on the verge of launching land reform, possibly its most dramatic and important reform to date. The land reform concept that Prime Minister Volodymyr Groisman has proposed, however, is unlikely to gain support from either the agricultural sector or from parliament. Due to its limitations, it will have a very narrow effect on the economy, and a good opportunity will once again be wasted. A much more promising option is also being discussed by lawmakers, however—but whether it will gain any momentum is an open question.

Earlier this month, Groisman presented the government’s plan that allows only individuals to buy land, and only up to 200 hectares per person. Parliament will likely reject this concept, since it ignores the fact that Ukraine’s agricultural sector cannot be globally competitive with land holdings limited to 200 hectares per person that cannot be used as bank collateral. The business of agriculture is volatile and has gone through many ups and downs in Ukraine; nonetheless, some of the best-managed, world-class companies in our country hail from this sector. It would be unwise to put those achievements at risk rather than build on them.

In Ukraine, twenty-four million hectares of land are cultivated by thousands of agricultural companies that each lease 1,000 hectares or more. Most of them have invested substantial capital into supporting local infrastructure, as well as new technologies to improve the quality of land and propel the country’s harvest to all-time highs. Those companies and their smaller farming colleagues see both huge risks and exciting opportunities accompanying the proposed reform, depending on its final concept. Their voices need to be heard.

But the proposed restrictions will fail to attract both additional bank financing and foreign direct investment. The reform is unlikely to be supported by agricultural business interests or the banking sector, and will have only a limited economic impact. Therefore, while Groisman’s initiative is an important and much-awaited step in the right direction, it must be bolder in order to succeed.

It’s important to keep one principle in mind: the more limitations, the lower the initial price, which contradicts the idea of maximizing the value of land for those who have been deprived of their lawful right to sell their land for sixteen years. In a system with excessive limitations, dodgy operators will flourish, and they have always brilliantly circumvented restrictions in a legally weak environment.

As an alternative to the government’s initiative, roughly twenty-five MPs plan to propose a liberal market model in May 2017. The draft law, titled “On Turnover of Agricultural Land,” will be based on the following assumptions:

The draft law would open the market to both private individuals and legal entities registered in Ukraine, starting on January 1, 2018. Concentration restrictions apply at 20 percent at the district level (roughly 20,000 hectares), 9 percent at the regional level (about 110,000 hectares), and 1 percent at the state level (approximately 400,000 hectares). All transactions would occur using an electronic auction system to avoid hostile purchases of land, which are already partially happening. Lease agreements that have been signed before a sale would be honored and valid until the end of the contract. The minimum initial price would be set at the level of the regulatory monetary valuation of land, which, depending on the region, is $900-$1,300 per hectare. The estimated average purchase price is $1,500 per hectare, based on current grey market transactions.

Along with the law, a package of bills will be submitted that focus on field consolidation (anti-raiding), support for small farmers, and the launch of various financial instruments common elsewhere but new to Ukraine. Commercial banks should also be ready with their proposed bill on protecting creditors’ rights, which could open the floodgates to broader financing of the sector. All of this would help avoid chaos during the land liberalization process and would open the sector to its full potential.

The proposed concept would have a strong, positive impact on the country with potentially staggering results. In the first year after the market opens, $1.5-$2 billion is expected to be added to the state budget due to the sale of one million hectares of state land that are currently being used inefficiently. Two to three years after the market opens, investments in the agricultural sector are anticipated to rise to $10 billion. And over time, an additional highly liquid mortgage market worth $45 billion should arise, stabilizing Ukraine’s banking system.

Land reform is crucial to stimulate much-needed economic growth in Ukraine. A liberal reform will result in the country’s citizens finally exercising their constitutional right to buy, sell, and use their land; the state will receive substantial additional revenue; agricultural companies and farmers will mobilize additional investments to further strengthen Ukraine’s position as the “breadbasket of Europe”; and commercial banks will finally have a high-quality form of collateral that will enable them to initiate long-term financing of other sectors of the economy. Everybody wins. But it is important to choose a decisive model now.

Aivaras Abromavičius was Ukraine’s Minister of Economy and Trade from December 2014 to April 2016. He tweets at @aivaras_aivaras. Alexey Mushak, a member of the Petro Poroshenko Bloc, is a Member of the Ukrainian Parliament.