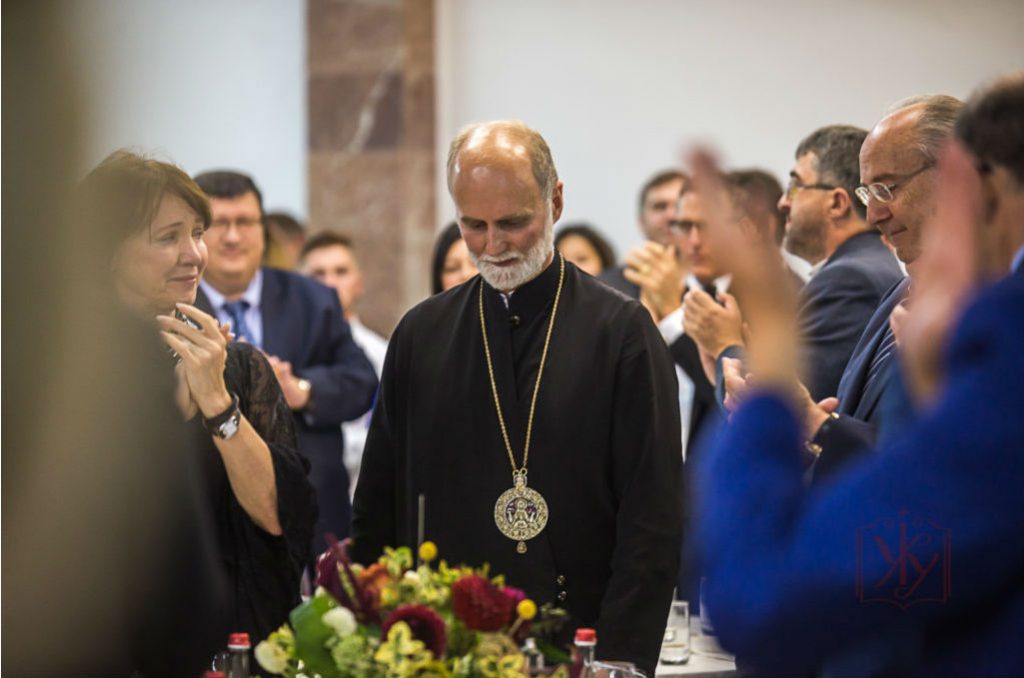 “God probably has a great sense of humor,” reckons Borys Gudziak, president of the Ukrainian Catholic University (UCU) in Lviv. The US-born archbishop transformed what was designed to be the Soviet communist party’s atheist ideology center in western Ukraine into a thriving catholic university.

The irony of this transformation is not lost on him. Only thirty years ago, the Ukrainian Catholic Church was the world’s largest banned religious organization. Its bishops and priests in the Soviet Union were jailed and harassed. Today the Church’s archbishop heads one of Ukraine’s top universities that many regard as the Harvard of Ukraine. Gudziak is widely respected and recognized as a key moral authority in an independent, predominately orthodox, Ukraine.

Gudziak’s new job description includes teaching doctrine, governing Catholics in his jurisdiction, sanctifying the world, and heading the Church’s external relations. It is in representing the Church, and Ukrainians, where Gudziak will really shine and Ukraine will benefit.  A Harvard graduate with a powerful charisma, he should quickly have the ear of officials and influencers in United States.

Gudizak was born in Syracuse, New York. He entered a Ukrainian seminary in Rome and subsequently got his PhD at Harvard. In Rome, Borys met octogenarian Ukrainian cardinal Josyf Slipyj, who had arrived in Rome after being imprisoned for eighteen years in Soviet gulags. Slipyj was released as a result of a chance liaison between the Vatican, an American political journalist, the young Catholic US President John F. Kennedy, and Nikita Khrushchev. Slipyj had an enormous influence on the young seminarian and it was in the Eternal City that the future archbishop crystalized his service to the Ukrainian people and their church.

He may not get, however, an overwhelmingly warm reception from everyone in the United States. The June cover of The Atlantic, an influential US monthly magazine, features a darkened photo of St. Patrick’s Cathedral above the headline “Abolish the Priesthood,” calling on Catholics to detach themselves from the clerical hierarchy. But then again, Gudziak isn’t an ordinary Catholic priest.

Best known for launching and leading UCU to become a world-class educational institution and a symbol of a new Ukraine, the 58-year-old archbishop has spent his professional life preaching the message of freedom, dignity for all, and building trust among people in a post-genocidal, traumatized post-soviet society. For more than two decades, Gudziak has been healing those wounds, and talking to people from all walks of life with his visionary, charismatic, and inspirational approach. He also has a remarkable track record of fundraising, allocating tens of millions of dollars to build and run a state-of-the-art university. UCU hosts one of the country’s best business schools, Lviv Business School, inspiring ethical business and entrepreneurship.

In his sermons and public talks, the bishop does not shy away from challenging topics, most recently talking about the prospect of reconciliation between Ukrainians and Russians. Gudziak spent the past seven years as bishop in Paris, where he often heard about France’s reconciliation with Germany. In July, Gudziak will travel to the Vatican where Pope Francis has invited him together with other top clergy from the Ukrainian Church to strategize on what more the Church can do to help end the suffering and deaths in eastern Ukraine.

Gudziak arrives to America at a time of jumbled perceptions about Ukraine. The White House, State Department, and Congress are all striving to understand how the future may unfold in Ukraine with a new president and parliament later this year. Both US and Ukrainian politicians will be paying close attention and making critical decisions on foreign policy.

As Archbishop Gudziak commences his new appointment, Ukraine’s new foreign policy team, diaspora, and politicians would be well advised to make good use of his advice and voice. US government officials could also benefit greatly from listening to him.