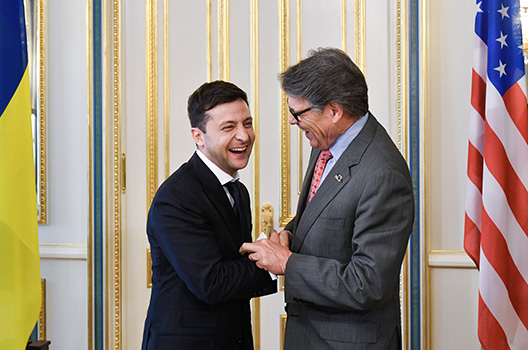 On August 29, the newly-elected Ukrainian parliament will convene. The country has a unique chance for change that rests mainly with the president, parliament, and soon-to-be appointed government, but the West has a significant role to play. Ukraine will have a window of opportunity for profound reform, but such windows are rarely open for long. The West needs to stand up and deliver while it is open.

The first piece of advice to the West is to help rather than brake. President Volodymyr Zelenskyy and his top advisors have made clear that they want to carry out key reforms swiftly. One of the first votes in the new parliament should abolish parliamentary immunity, as Zelenskyy demanded in his inauguration speech. The likely new Prosecutor General Ruslan Ryaboshapka wants to clean up the leadership of the Prosecutor General’s Office and thoroughly reform that dysfunctional institution. Strong voices in the Zelenskyy team want to abolish the odious Department K for organized crime and corruption in the SBU. During his recent visit to Turkey, the president declared that he wanted to abolish the moratorium on private land sales this year.

The West must not raise concerns about the speed of reforms in vital areas and call for delays, as it has done in the past. Progress in Ukraine has gone too slow for 28 years. The most disturbing example is the Venice Commission of the now discredited Council of Europe. Its members include judges from dictatorships like Azerbaijan and Russia. Not surprisingly, the Venice Commission always calls for slow, partial, and incomplete reforms, and it bears great responsibility for Ukraine’s new Supreme Court, with 44 of its 193 judges lacking integrity. It could have cleansed the court. Ukraine should stop consulting this flawed organization. Other purely western organizations, the European Union or the G-7, should take its place.

In 2000, Ukraine privatized eighty percent of all agricultural land, by distributing it to members of collective farms. Unfortunately, an annual moratorium on the sale of these private land plots was introduced, and it has been prolonged for one or two years at a time. It is time to stop this charade. Throughout the term of President Petro Poroshenko, there were discussions about easing the moratorium with various pilot programs for sales of remaining state land. Ukrainian patience is up and the moratorium contradicts the Constitution. The beneficiaries of the ban are big landholders, who lease tens of thousands of hectares of land for very cheap fees. The World Bank, the international organization in charge of land reform advice, needs to support swift reform.

What is wrong with the Ukrainian economy?

Construction is booming in Kyiv, Ukraine, but not the rest of the economy. A major reason is that Ukrainians with some extra savings do not put their money into banks but buy additional apartments instead. Others keep their savings in cash. On average, Ukrainian MPs keep $700,000 at home. Those who have a lot of […]

One of the big failures during the last five years was privatization. Ukraine still has 3,350 state-owned enterprises. The 100 most valuable should be privatized carefully and their corporate governance be improved, but the other 3,250 enterprises or their ruins should be auctioned off as soon as possible. The European Bank for Reconstruction and Development (EBRD), the World Bank, and USAID should carefully advise this process.

The most important international financial institution in the mix is the International Monetary Fund. Fortunately, the IMF is very fast. As soon as a new government has been formed, hopefully in September, the IMF should negotiate a three or four-year agreement (called an extended fund facility in IMF language) offering Ukraine credits of at least $2 billion a year. Ukraine has already secured macroeconomic stability, but the National Bank and the Finance Ministry need moral, technical, and financial support to keep it up.

If Ukraine succeeds in carrying out these most vital reforms this fall, the focus should move to investment in the winter. Ukraine requires massive investment both in the private and public sector. In the public sector, the World Bank, the EBRD, and the European Investment Bank should contribute greatly. For the development of private investment, it is vital that export credit and insurance institutions, such as the US Export-Import Bank and Overseas Private Investment Corporation, step up their game.

Needless to say, there are also plenty of tasks for the European Union and bilateral assistance agencies such as the UK’s Department for International Development and the Swedish International Development Cooperation Agency. The whole Ukrainian state administration needs to be reformed, and successful decentralization needs to be completed. Naturally, education and health care are massive needs, but right now the focus should be on the basics of the state.

Anders Åslund is a senior fellow at the Atlantic Council and author of the new book “Russia’s Crony Capitalism: The Path from Market Economy to Kleptocracy.” He is a member of the supervisory board of Ukrzaliznytsia. Follow him on Twitter @anders_aslund.

Image: President of Ukraine Volodymyr Zelenskiy and U.S. Secretary of Energy Rick Perry shake hands as they meet after Zelenskiy's inauguration ceremony in Kiev, Ukraine May 20, 2019. Mykola Lazarenko/Ukrainian Presidential Press Service/Handout via REUTERS ATTENTION EDITORS - THIS IMAGE WAS PROVIDED BY A THIRD PARTY.