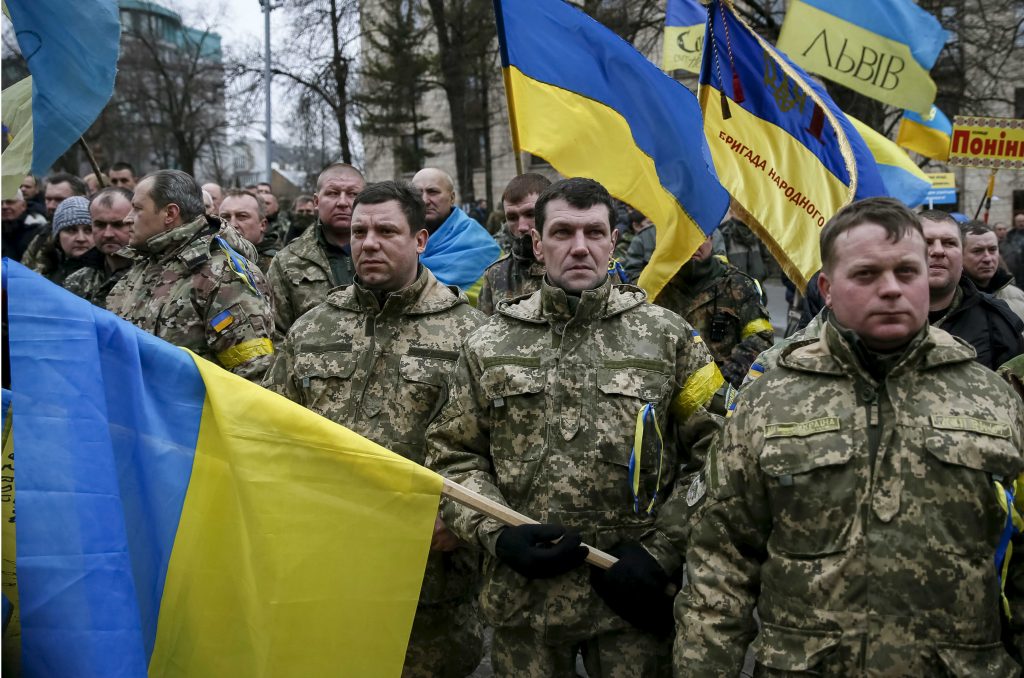 In 2014, a 16-year-old Ukrainian, nicknamed Maley, watched the Euromaidan Revolution and Russian invasion on television and contacted his local army recruitment office to sign up. His calls went unanswered, so he took a train from the Carpathians to the front, armed with his grandfather’s hunting rifle and a brass plate bought by his mother taped to his chest as protection. He joined a volunteer militia.

“I went to save my country,” he told me in a 2015 interview from his bed in a Kyiv hospital. He was wounded after the army medic behind him stepped on a landmine and lost both her legs. “She wasn’t paying attention. I’m going back.”

If it wasn’t for Ukrainian farm boys, nurses, veterans, and grandfathers, the Russians would have swallowed half of Ukraine. In fact, this was the plan. The stage for invasion had been set by former Ukrainian President Viktor Yanukovych who consolidated his power, jailed opponents, rejected European Union membership, and gutted Ukraine’s army by selling off its best equipment. By 2014 Ukraine had only 6,000 combat-ready troops.

Unfortunately, 2018 is starting to shape up like 2013. President Petro Poroshenko consolidates his power by foot dragging on reforms promised to Western donors, then by harassing opponents. Like the Yanukovych era, there is no rule of law, no parliamentary accountability, and no effective pursuit of corrupt officials or even of Yanukovych who stole billions. Conditions resemble those that led to the 2004 and 2014 “street” revolutions, a situation that officials continuously say cannot be allowed because it would lead to instability and renewed Russian aggression.

But if Ukrainians must take to the streets again, it will be different this time.

The specter of a Russian invasion no longer exists, nor does the possibility that more “little green men” will foment insurrections. The reason is that military conscription, and Western funds, have created one of Europe’s biggest military forces, with 204,000 soldiers (slightly fewer than France’s), 46,000 support staff plus paramilitary forces or 53,000 border guards, and 60,000 in the National Guard.

Most importantly, the Trump administration is sending Javelin anti-tank missiles (an estimated 200 missiles) as well as M107A1 sniper rifles to Ukraine’s military. In return, Ukraine pledged to clean up its corrupt defense industry.

The deployment of such weapons represents a shift from Ukraine’s turn-the-other-cheek ceasefire orders to an ability to return or initiate preemptive attacks. For instance, the Javelin is a fearsome “fire and forget” missile that tracks and obliterates a stationary or moving tank or building using infrared guidance. The sniper rifle has a range of 1,800 meters and fires bullets that go through walls and essentially vaporize enemies.

In other words, it’s different this time because Ukraine is armed to the teeth. The country is full of patriotic veterans, like Maley and thousands more, in addition to its powerful, conscription army. This not only neutralizes Russia, but underpins any future street revolution should the current regime refuse to fully reform the country before the 2019 elections.

Ukraine’s army is the bulwark against Russia, which means that the fight against corruption can continue and escalate. This issue is more important to Ukrainians, according to independent polls, than are concerns about Russia.

Another difference is that the West, its governments and institutions, are solidly behind Ukrainian aspirations for a real democracy and just society. By contrast, Russia took the world by surprise in 2014, with its sham “separatist” insurrections, but now there is no question that Moscow abrogated international law with its invasion.

Another difference, should change come about through elections or otherwise, is that Ukraine would not be left in chaos as happened in 2014. Ukraine has developed stronger financial institutions, important Western allies and expertise, and an “infrastructure of governance,” consisting of hundreds of honest parliamentarians, executives, financiers, lawyers, activists, international donors and benefactors, and political leaders. Some meet informally already, like a private Kyiv group of 200 technocrats, who could immediately execute a peaceful and credible transition.

Poroshenko, who ran as a reformer, has undertaken some good work, but four pieces of unfinished business remain: Withdraw and quickly revise his recent sham proposal to create the Anti-Corruption Court by making it truly independent in accordance with the wishes of Ukrainians and Western donors; stop the harassment of the National Anti-Corruption Bureau of Ukraine; strip parliament of immunity which perpetuates a “Club of Crooks” culture by allowing members to flout the rule of law; and ban political ads from all television stations during the 2019 elections to remove oligarchic influence.

Poroshenko is running out of time. The Anti-Corruption Court must be operational in time to adjudicate, and convict, at least three high-profile cases brought to it by the National Anticorruption Bureau of Ukraine before the spring 2019 election. The other reforms must be completed early this year.

If these transformations are not embedded, another street protest in the months leading up to the elections is likely, and it will garner mass international support. And with their military bulwark against Russia, Ukrainians may finally have a chance to overthrow their odious elites.

It has been four years, and hundreds of deaths later, since the Euromaidan, but election laws and courts remain rigged. It’s tragic that, billions in support from the West to fight Russia and corruption later, the only “opposition party” that hasn’t been smeared by Ukraine’s criminalized oligarchy will have to be its good citizens amassing on its streets.

And if that must happen, there’s little doubt that this time will be very, very different.

Image: Members of self-defense battalions take part in a rally to commemorate demonstrators who were killed during the Maidan protests in 2014 in Kyiv, Ukraine, February 20, 2016. REUTERS/Gleb Garanich