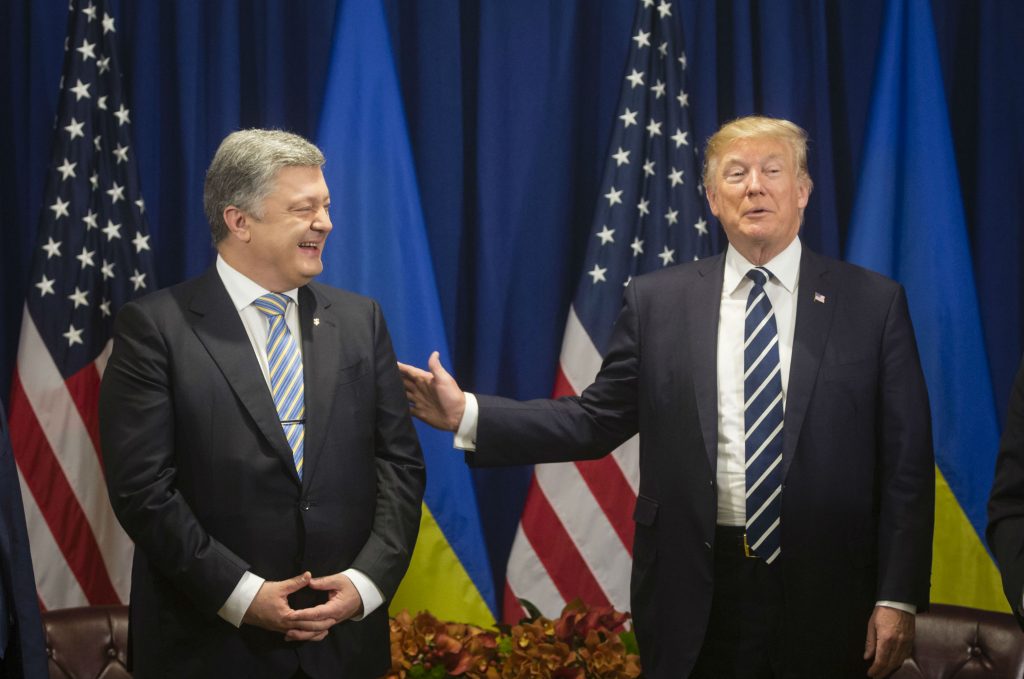 Petro Poroshenko scored a prized diplomatic plum for which most heads of state and government aggressively vie: a one-on-one meeting with President Donald Trump on the sidelines of the United Nations General Assembly in New York.

In addition to Ukraine’s president, Trump held only nine other private meetings with the heads of state or government of Afghanistan, Egypt, France, Israel, Japan, Qatar, South Korea, Turkey, and the United Kingdom.

For Poroshenko his September 21 meeting was no small accomplishment coming just eight months after Ukraine appeared on the outs with Trump. The US president appeared to be heading toward a close working partnership with Russia and was showering Vladimir Putin with praise.

As importantly, members of the Trump inner circle wrongly believed Poroshenko had meddled in the US elections by working to discredit controversial campaign manager Paul Manafort. But as I’ve written, this information was flat-out wrong. Poroshenko and his team didn’t interfere at all.

Over the last few months, the Ukrainian president worked assiduously to convince key US administration officials and media of Ukraine’s and his personal neutrality in the 2016 US presidential race. Ukraine employed the services of former RNC Chairman Haley Barbour’s BGR government relations firm. Poroshenko also wooed visiting US dignitaries close to the US president, including visiting Republican legislators, Rudy Giuliani, and Newt Gingrich.

As the only other billionaire businessman running a country, Poroshenko—who made his fortune in the chocolate and trucking businesses—felt he could build a strong, pragmatic rapport with the president and understood the transactional nature of Trump’s approach to foreign affairs, and he was right.

Through several telephone conversations and a short White House meeting on June 20, Poroshenko explored a new direction for US-Ukraine relations. He ditched discussions that had formerly focused on aid and refocused the conversation on trade, investment, and deeper defense cooperation.

At the same time, Poroshenko used skills he had honed in international business and as Ukraine’s foreign minister to build a stronger relationship with Trump and his evolving team.

Naturally, Poroshenko was aided by internal dynamics within the administration. Trump, doubtless, understands that given widespread suspicions about his former embrace of Putin, a tough stance on Ukraine is an important litmus test of his distance from the Kremlin and its influence.

The growing influence of former military leaders who include the secretary of defense, national security advisor, and White House chief of staff, and of Vice President Mike Pence, gave Poroshenko sympathetic echo chambers close to the president. The appointment of Russia hawk Kurt Volker as the US envoy on Ukraine, and Volker’s strong relationship with Secretary of State Rex Tillerson added to the momentum. Russia’s growing belligerence and threatening military maneuvers near NATO’s eastern flank also helped.

Just days before the UN General Assembly opening, a ship bearing anthracite coal from western Pennsylvania arrived in the Ukrainian port city Odesa. The deal is part of an initial $80 million purchase agreement.

In his latest meeting with Trump, Poroshenko pressed his case for deeper military and economic cooperation, including Ukraine’s need to replace coal from the Russian-occupied Donbas region and deeper cooperation in the agricultural sector. Poroshenko emphasized that trade between the United States and Ukraine has increased and that this has created hundreds of thousands of jobs in both countries. He was quick to tell Trump that US businesses are welcome in Ukraine.

Poroshenko’s elegant wife, Maryna, contributed to the cultural diplomacy. In an official photo of the two presidents and first ladies, she is seen wearing an eye-catching fashion ensemble created by a couturier from Kharkiv, close to the Russian border and zone of combat. An official photo of their meeting shows a beaming Trump.

Poroshenko’s outreach to Trump is more than a case study in effective diplomacy. It has important consequences for Ukraine’s national and economic security.

The United States already has strengthened sanctions against Russia and Trump has embraced Poroshenko’s proposal for a UN peacekeeping contingent along the Ukraine-Russia border in the east and along the line of contact.

Ukraine, which formerly was in desperate need of Javelin anti-tank weapons, appears to have developed its own effective substitute. It has welcomed the US Senate’s recent authorization of $500 million in support for military assistance and training and now seeks delivery of sophisticated weapons technologies, including long-range counter-battery radar that can effectively target Russian artillery and document Russian aggression.

Ukraine’s economy, which is growing at the rate of over 2.5 percent and was recently boosted by the sale of $3 billion in Eurobonds, will be helped by Trump’s public assertion that: “Ukraine is coming along pretty well.”

In short, the improving personal chemistry between Presidents Poroshenko and Trump augurs well for the coming months and is a signal that Putin’s attempts to weaken Western resolve have failed in the United States, just as they have failed in France and Germany.

Adrian Karatnycky is a senior fellow at the Atlantic Council and co-director of its Ukraine in Europe initiative.