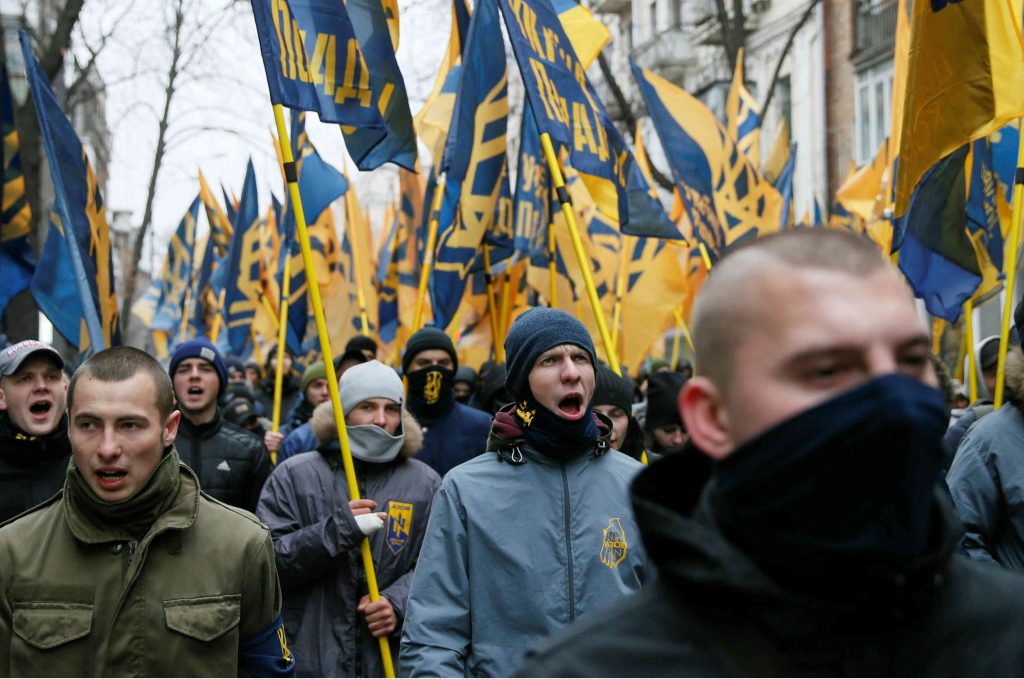 The election of Donald Trump to the US presidency is the latest indication that the liberal globalist consensus of the post-Cold War era is finally over. The sanctity of political correctness has been shattered and we now find ourselves hurtling headlong into the uncharted territory of anti-establishment populism.

Trump’s triumph is part of a broader pattern visible across the Western world characterized by the rise of anti-immigration, nativist parties which, until relatively recently, would have been considered part of the far-right political fringe. The mainstreaming of people like France’s Marine Le Pen and Geert Wilders in the Netherlands, coupled with the Brexit referendum victory in the United Kingdom, all point to a broad and sweeping shift of the political middle ground toward the nationalist right.

This sea change in the political climate throughout most of the developed world puts Ukraine’s own alleged “nationalist menace” into perspective. For the past three years, the Kremlin has relentlessly promoted narratives that warn of a growing Ukrainian nationalist threat. Surprisingly large numbers within both the international media and analytical communities have embraced this interpretation. Their readiness to lead with a nationalist narrative has served to obscure the lofty ideals and straightforward reformist objectives of the Euromaidan Revolution, while also injecting a level of toxicity into the debate that has repelled many of Ukraine’s natural allies.

It is difficult to interpret this as anything other than a major misunderstanding of the historic processes at work in today’s Ukraine. Assertions of a nationalist menace have always been directly at odds with the available electoral evidence on the ground in Ukraine. The rising tide of right-wing populism elsewhere in the Western world is now helping to highlight just how misplaced and disproportionate this scaremongering about Ukrainian nationalism really is.

Since the 2014 Revolution of Dignity, the Ukrainian political arena has witnessed the arrival of numerous new nationalistic parties. However, not one of them has emerged as a serious political contender. Opinion polls consistently place overall support for Ukraine’s nationalist parties at between six and eight percent. These surveys tally directly with the results of the autumn 2014 parliamentary election, in which none of the country’s nationalist political parties passed the five percent threshold. The May 2014 presidential race saw nationalist candidates sink without a trace. As if to underline the point, Jewish presidential hopeful Vadim Rabinovich famously received a greater share of the votes than the collective support secured by all the nationalist candidates.

Compared to the rest of Europe, where it is now commonplace for nationalist parties to win upwards of a quarter of the vote, support for nationalists in Ukraine is strikingly low. Given the circumstances in today’s Ukraine, this is particularly noteworthy. Ukrainian society is currently in the midst of a post-revolutionary national awakening while also engaged in what many regard as a war of independence against Russia. If nationalist parties cannot flourish in such a frenzied environment, one has to concede that Ukrainian society does not currently contain the seeds of such fervent.

It is also worth considering the perspectives of Europe’s self-styled nationalist parties. Virtually all of them actively ally themselves with President Vladimir Putin’s Russia and denigrate Ukraine. They receive financing and favors from the Kremlin, lavish praise on Putin as a model nationalist leader, attend far-right forums hosted in Russia, and dutifully accept roles as election observers in Moscow’s hybrid war pantomime. In contrast, nobody from any of Europe’s prominent nationalist groups has come out in support or sympathy for Ukraine’s revolution—a particularly strange state of affairs given the Kremlin’s oft-stated claims of rampant Ukrainian fascism.

It is easy to write off the hype over Ukrainian nationalism as mere Russian information warfare, but this is only part of the picture. One must also recognize the role played by Ukraine’s previously low global profile and relatively recent emergence from international obscurity. For many decades, much of the outside world was encouraged to regard Ukraine as part of Russia. It is therefore only natural for uninformed international observers to perceive expressions of Ukrainian independence as somehow radical in nature.

Nor are they alone in doing so. This phenomenon is still very evident within Ukraine itself. Significant portions of today’s Ukrainian population, especially members of older generations, continue to equate mundane demonstrations of patriotism with political extremism. Raised on notions of virtually indivisible fraternity with Russia, they are inclined to see expressions of Ukrainian independence as dangerous and disruptive departures from the historical norm.

In reality, Ukraine is probably among the least nationalistic nations in today’s Europe. In a continent increasingly gripped by populist nationalism, it is a land where the politics of moderation reigns supreme despite three years of revolution, war, and economic crisis. Ukrainians found themselves at the epicenter of twentieth century totalitarianism. The one thing they do not want now is extremism of any description. Outside observers would be wise not confuse the current nation-building process with the kind of far-right threats taking root elsewhere.

Peter Dickinson is the publisher of Business Ukraine magazine and Lviv Today, and editor-at-large at The Odessa Review. He was previously chief editor of Ukraine Today and What’s On Kyiv. He tweets @Biz_Ukraine_Mag.

Image: Activists of the National Corps political party attend a march demanding to complete the investigation into the killings during the Ukrainian pro-European Union mass protests in 2014, on the Day of Dignity and Freedom in central Kyiv, Ukraine, November 21, 2016. REUTERS/Valentyn Ogirenko