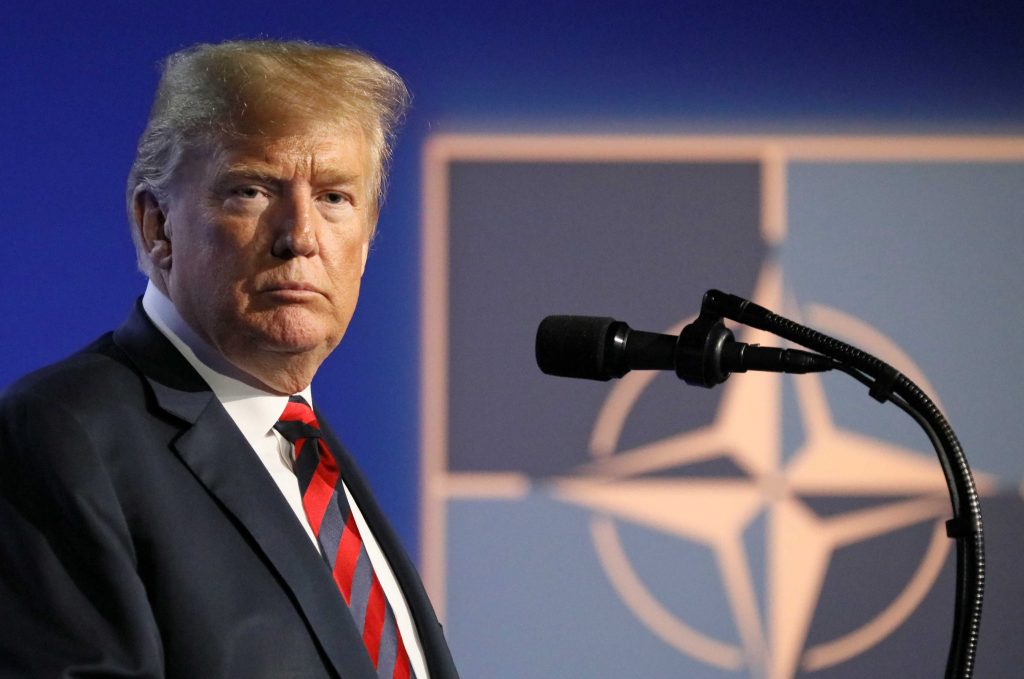 US President Donald Trump looks on as he holds a news conference after participating in the NATO Summit in Brussels, Belgium July 12, 2018. REUTERS/Reinhard Krause

On January 14, the New York Times confirmed that President Donald Trump talked about pulling out of the North Atlantic Treaty Organization more than once in 2018.

But can the president quit NATO unilaterally?

“I think the short answer is yes,” said Alexander Vershbow, a former Deputy Secretary General of the North Atlantic Treaty Organization and a distinguished fellow at the Atlantic Council, in an interview on January 16.

The US Constitution says that the Senate should give its advice and consent on treaties, but it is silent on withdrawing from treaties.

However, it’s not as easy as Trump standing up and declaring that the United States is no longer a member. Damon Wilson, executive vice president of the Atlantic Council, told ABC News that Article 13 of the NATO treaty complicates things. It requires any member who wants to leave to give a one year notice to the United States before doing so. “The reality is President Trump would have a revolt on his hands,” Wilson said, since the Senate strongly supports NATO and reaffirmed its commitment to the organization in a resolution last year.

However, said Vershbow, “He could disengage in many ways from NATO even if we remained formally a member. That could be just as damaging to the cohesion, effectiveness, and credibility of the alliance.” Trump could pull US troops out of Europe, stop US participation in NATO missions like Afghanistan, and withdraw its missile defense shield, for example.

Vershbow said there are grounds to be nervous. It’s no secret that Trump doesn’t like alliances and thinks the United States is paying too much and not getting enough in return from NATO. Plus, Trump has taken radical steps before. After the Singapore summit in June 2018, Trump unilaterally suspended the annual US-South Korean exercises without getting anything in return from North Korea’s Kim Jong Un.

Trump might try to quit NATO, but Vershbow said one has to hope that the president will listen to his current circle of advisors, including Secretary of State Mike Pompeo and National Security Advisor John Bolton, who are Atlanticists, though they are less likely to contradict the president than former Defense Secretary Jim Mattis.

If Trump pulled out of NATO, “[Europe] would be way in over its head,” Vershbow said. It wouldn’t be able to provide for its common defense and might be more vulnerable to Russian destabilization tactics as well.

Moreover, it’s wrong to look at NATO membership as something that only benefits the Europeans.

“NATO has always been and remains a net contributor to US security. It’s not an act of charity that we provide to the European allies or Canada,” Vershbow said. “The lessons of World War I remain valid and US disengagement from Europe ultimately increases the risks of instability and conflict.”

Plus, the US benefits from a peaceful Europe. “We would probably be undermining our own economic future by casting Europe adrift.”

The former diplomat also worries about the demoralizing message that the US quitting or downgrading its commitment to NATO would send to aspiring members like Ukraine and Georgia. He thinks they would be far more likely to give into Russian pressure and efforts to reestablish dominance over them.

Polling shows strong support for NATO. In 2017, 62 percent of Americans held a favorable view of NATO.

“NATO works. It’s relatively cheap in terms of the overall share of the budget that the United States pays,” Vershbow said. “If we pulled out of NATO, it would be difficult to reinvent anything anywhere near as effective or cost effective for US security.”