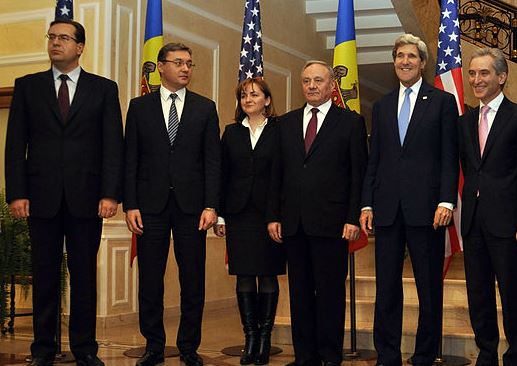 US Secretary of State Kerry meets Moldova’s political leaders in December 2013. Democratic Party leader Marian Lupu (at left) has agreed on a new government coalition with Prime Minister Iurie Leanca (right). But they lack a parliament majority. Foreign Minister Natalia Gherman (third from left) is being discussed as a prime ministerial candidate to break the logjam. (State Department photo)

Pro-Europe Parties Won a Narrow Victory at the Polls, But Can’t Agree on a Government

Eight weeks after voters in Moldova gave a narrow victory to the three main parties inclined toward greater democracy and ties with Europe, those groups are locked in a political battle that has prevented the formation of a government. The three-party coalition, called the Alliance for European Integration, which broke the Communists’ eight-year hold on power in 2009, is at an impasse over the distribution of government posts, writes Atlantic Council Senior Fellow Brian Mefford.

It’s about the worst thing that Moldova’s political leaders could do for themselves or the country. And it risks complicating the effort by neighboring Ukraine to build its own ties to Europe and escape Russian domination of its foreign and economic policies. Moldova, like Ukraine, is partly occupied by Russian military forces and is targeted by Moscow with economic, military and other pressures to remain within Russia’s sphere of influence rather than aligning with Europe. [UPDATE: On January 23, as this article was published, two of the three parties agreed to form a minority government. New Atlanticist will follow that attempt in coming weeks as part of its continued analysis of Moldova’s evolution.]

In Moldova, the pro-Europe bloc’s narrowed majority in parliament in the November 30 vote results reflects growing public frustration with their inability to bring online the critical economic and governance reforms that could revive the moribund economy. Pro-Russian groups made electoral gains and Moldovan analysts told the Atlantic Council that the leadership might now have as little as two years to improve people’s lives, or risk an electoral backlash that would sweep pro-Russian conservatives into power.

While the Liberal Democratic Party, led by Prime Minister Iurie Leanca, and the Democratic Party of parliament Speaker Marian Lupu have agreed on the shape of a government, the Liberal Party, headed by Mihai Ghimpu, has refused for weeks to join them in. The Liberals “claim that they are not receiving key posts in the coalition agreement, although it appears the post they covet they most is the presidency,” according to Mefford, who monitored the recent elections and tracks Moldovan politics  wrote this week on his political blog. “Given that the Liberals received just 10 percent of the vote and would be the most junior partner in the possible three-party coalition, demanding the presidency seems excessive,” Mefford wrote this week in his blog on Eastern European affairs.

“In addition, when Liberal leader Ghimpu served as parliamentary speaker” in 2009-2010, and as acting president, “his brief term was remembered as particularly combative towards Russia without achieving any results in the process,” Mefford writes. The Liberal Democrats and Democrats have approached the Communist Party, which also has favored cooperation with the West. And Foreign Minister Natalia Gherman has been discussed as a possible compromise candidate as prime minister to break the logjam.