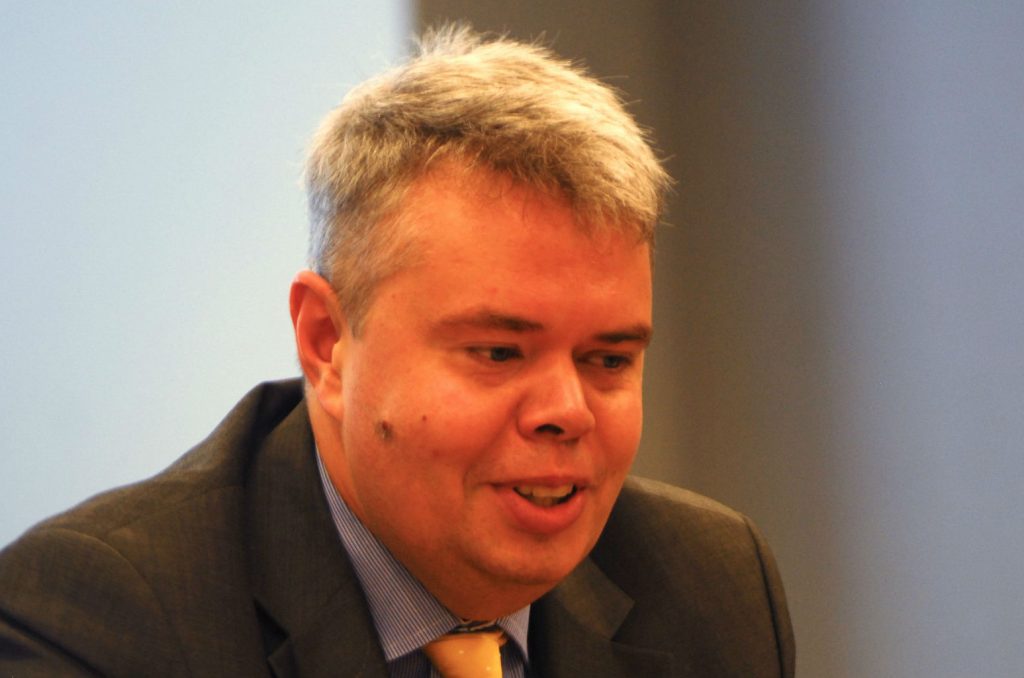 Dmytro Solohub admits that the Ukrainian economy is “very fragile” and faces “lots of security risks”— but says he’s doing everything he can to stabilize Ukraine’s currency, control galloping inflation, and return his country to prosperity as quickly as possible.

Solohub, 37, took over in mid-March as Deputy Governor of the National Bank of Ukraine (NBU). He was previously head of research at the Kyiv-based Raiffeisen Bank Aval.

On July 15, Solohub — who was born and raised in neighboring Belarus, but has lived in Ukraine for fifteen years — spoke to half a dozen people at a private breakfast at the Atlantic Council. John Herbst, Director of the Atlantic Council’s Dinu Patriciu Eurasia Center and US Ambassador to Ukraine from 2003 to 2006, organized the event.

“There’s no silver bullet,” Solohub said. “It will be difficult to recover, but it’s still possible. Ukraine has very good human capital and a large domestic market. This is the direction we should be going in.”

Solohub added: “What’s important is the establishment of a level playing field. If you create that, you will have macro financial stability. And the future of domestic demand in Ukraine is small and medium-sized enterprises — the very sector that has suffered most.”

Solohub said Ukraine’s GDP fell by 6.8 percent last year, and that the war between Ukraine and pro-Russian separatists in the east accounted for about four percentage points of that decrease. This year, he expects Ukrainian GDP to shrivel by 9.5 percent, with inflation reaching 48 percent and falling to between 12 and 13 percent in 2016.

Q: Has Ukraine suffered as a result of the Greek Eurozone crisis?

Solohub: The exposure of Greek banks in Ukraine is pretty small. If there is a negative scenario in the EU it might affect Ukraine, but for the moment, we see the main effect as psychological. We try to explain to people that the Greek and Ukrainian situations are very different. In Greece, the debt-to-GDP ratio may reach 200 percent; in Ukraine, it’s half that. Greece has spoiled relations with all its main creditors and doesn’t have any alternative sources of funds, while Ukraine has huge international support. And although the reform process is difficult in Ukraine, it’s much better than in Greece.

Q: How do you see the role of international financial institutions such as the World Bank, the IMF, and the European Bank for Reconstruction and Development helping Ukraine through its current crisis?

Solohub: We understand there are a lot of issues, especially now that the Greek crisis is in full swing. Remember this is the first time Europe’s borders have been redrawn since World War II. Therefore, since Ukraine is really trying to change, there might be room for international financial institutions to be more flexible. Sometimes, their procedures are too tight and formal.

Q: Back in 2005, the Ukrainian hryvnia was pegged at five to the dollar. Since March 2014, it’s been pegged at twenty-two to the dollar. Do you expect any further devaluation of your currency this year?

Solohub: It depends. We have this fragile stabilization, and political and security risks are still there. But we’re confident that if we do our jobs right, everything will be OK. The policymakers are doing what they can, and it’s still not easy. The environment is difficult. We appreciate all the support we’re getting, both at the financial and the technical level.

Solohub: In general, people in Ukraine don’t trust anybody. That trust was lost back in 2008-09, because banks were not fulfilling their liabilities. What we are doing now is cleaning up the banking system and trying to rebuild trust, but this will take years. It’s a continuous process and not discrete, so there won’t be a point in time where we can say that before, people didn’t trust banks and now they do. I believe that with macroeconomic stabilization, people will just feel more and more comfortable with banks over time.

Q: Transparency International recently described Ukraine as one of the world’s most corrupt nations, ranking it 142nd out of 174 on its 2014 Corruption Perceptions Index. What do you think must be done to root out corruption in your country?

Solohub: I do not think countries are doomed to be corrupt. To me, the eradication of corruption is a difficult process, but it’s doable. You should combine a top-down approach with a bottom-up approach. Ukraine has huge potential to improve if corruption is eradicated and red tape is cut. But it’s difficult to undo things which had been building up for 25 years.

Q: How has the increase in Ukraine’s military expenditures affected the overall economy since fighting began in the eastern part of the country?

Solohub: Defense spending is definitely up, and that creates challenges for the budget. It’s not easy, but it’s unavoidable and must be done. We have a saying: ‘You should feed your own army, because if you don’t, then you’re feeding the army of your enemies.’

Q: What message do you have for those who are concerned about Ukraine’s immediate economic outlook?

Solohub: The reforms going on now are difficult and painful, and people are suffering to some extent. But it’s extremely important to explain to them that — even though they may be suffering now and living standards might deteriorate — it’s all for a better future.