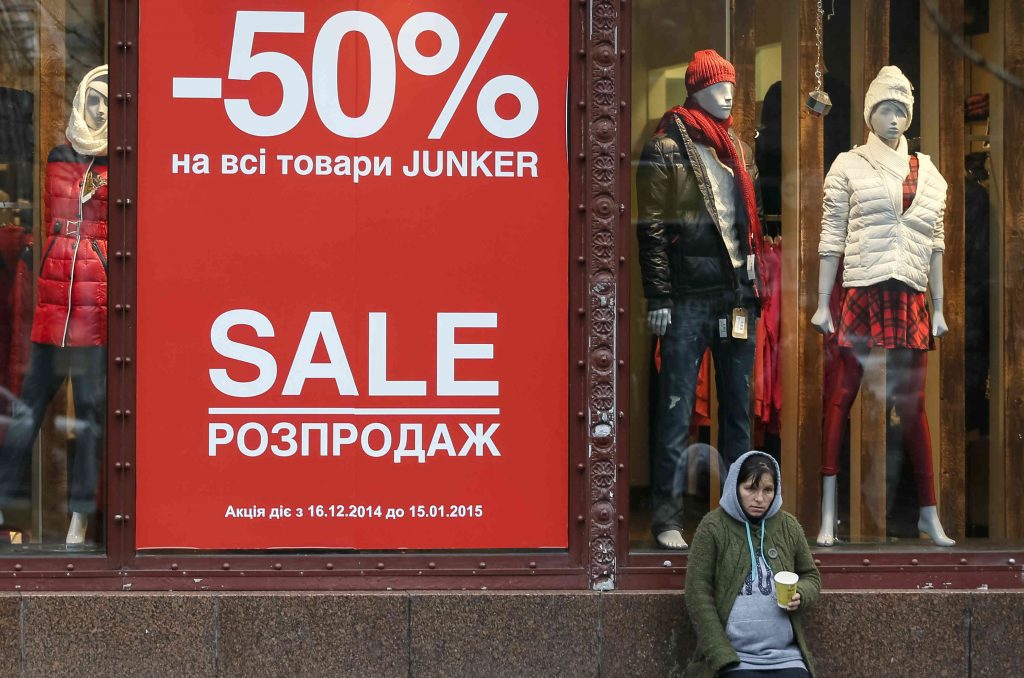 Ukraine’s economy is in crisis. Experts warn that the country’s gross domestic product could shrink by 6 to 12 percent and inflation could exceed 40 percent in 2015, although one prominent economist put that figure in triple digits already. The war in eastern Ukraine has throttled the country’s industrial capacity. To prevent the country from default, the International Monetary Fund (IMF) stepped in with a $40 billion international rescue package in March.

As the government of Ukraine and the IMF inked the deal, Moody’s Investors Service and the Standard & Poors rating agency downgraded Ukraine’s credit rating. The bad marks signal the obvious: the loan failed to convince investors that Ukraine can restore its creditworthiness in the near future.

The rescue package consists of an IMF loan of $17.5 billion ($5 billion of which has already been disbursed), $7.2 billion in commitments from other multilateral and bilateral creditors, and a prospective $15 billion in savings to be negotiated as debt restructuring with Ukraine’s sovereign bondholders.

But no specific terms about the bond part of the deal have been officially announced, and that’s the most important part. The debt deal has to be finalized in less than thirty days. If a deal cannot be reached, the IMF will likely suspend Ukraine’s loan program in June.

“[W]hat people are really looking out for is the details on Ukraine’s debt restructuring,” William Jackson, a London-based economist at Capital Economics, told Bloomberg.

Little is known about the actual details of a deal. The government has warned that restructuring will likely involve a significant haircut. Early debt consultations with bondholders, including the US-based Franklin Templeton, indicate that Ukraine’s government might be seeking a haircut as large as 30 to 40 percent for external debt due in 2015-2018.

So far, what we know of Ukraine’s official debt restructuring strategy looks like arm-twisting: either its creditors accept or the country defaults; no other options are on the table. The IMF-led bailout is conditional upon the success of a debt deal that must be reached in less than thirty days. In addition to the uncertain outcome of fighting in eastern Ukraine, the country’s economic and reform prospects depend on the outcome of rising domestic political tensions, a surge in violence, and behind-the-scenes battles among the oligarchs.

The current debt restructuring approach is not the right strategy for a country in crisis. Instead it should be complemented by four other steps, which could prevent Ukraine from defaulting:

First, the IMF should review its conditionality for another $5 billion tranche. Ukraine should have more time to negotiate a more balanced and fair debt retirement and restructuring strategy with its creditors.

Second, Ukraine’s official creditors should do more. International figures such as George Soros have already written convincingly for the need to pledge more resources to support Ukraine.

Third, a debt-restructuring strategy should include a voluntary option for debt-to-equity swaps for those investors who may be willing to convert bonds into selected assets. In the 1990s, these types of swaps were instrumental in retiring some of Latin America’s debt.

Finally, Ukrainians should be invited to contribute to the country’s debt relief. Ukrainian households keep an estimated $20 billion to $30 billion under the mattress, while approximately $140 billion of Ukraine-related assets have accumulated abroad.

For households, the Ukrainian government could issue retail US-dollar-denominated bonds with no past tax liabilities, a no-questions-asked approach, and an external guarantee for the principal similar to bonds guaranteed by the US Treasury. An instrument like this might be an attractive alternative for many Ukrainians who purchase bank safes and additional house security arrangements to protect their assets. But without firm guarantees, many households that have already lost an estimated three to five billion hryvnias as a result of the hryvnia downfall, raging inflation, and huge deposit withdrawals are unlikely to agree.

For oligarchs, a similar approach should be developed. Despite the hard times, some continue to flourish.

A different approach to debt restructuring is needed—one that doesn’t erode value or the trust of international investors. Of course it needs to be accompanied by market reforms aimed at boosting exports, the return of foreign exchange revenues, consistent financial regulation, better taxation and deregulation regimes, and a genuine fight against corruption. But for now, keep your eyes on the debt deal.

Dr. Yuri Poluneev is former deputy head of the Council of the National Bank of Ukraine.

Image: A pregnant woman begs for money in central Kyiv on January 15, 2015. Ukraine's foreign currency reserves were down to just over $7.5 billion last year, the lowest level for 10 years. The IMF stepped in with a $40 billion international rescue package in March, but the package is conditional upon the success of a debt deal that must be reached in less than thirty days. (REUTERS/Gleb Garanich)