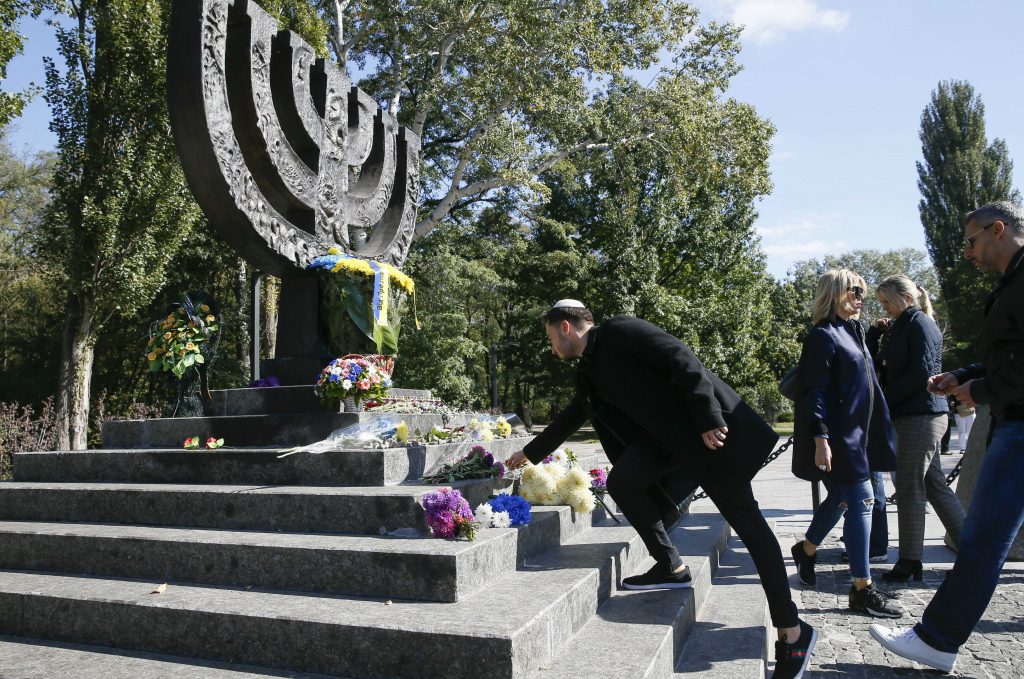 People attend a ceremony at a monument commemorating the victims of Babyn Yar (Babiy Yar), one of the biggest single massacres of Jews during the Nazi Holocaust, in Kyiv, Ukraine September 29, 2017. REUTERS/Valentyn Ogirenko

When it comes to the history of the Holocaust, an accurate memory can be a dangerous thing. That’s doubly true in Ukraine. While many associate the Holocaust with German concentration camps like Auschwitz, in Ukraine the killing was more personalized, with 1.5 million Jews being shot en masse and dumped in graves across the country. No site better epitomizes this “Holocaust of bullets” than Babi Yar in Kyiv, where on September 29-30, 1941, over 33,000 Jews were executed and dumped into a ravine.

Today nothing but a hodgepodge of small memorials stands there, but with the 77th anniversary of the Babi Yar killings coming Saturday, that could change. In December 2015, Kyiv Mayor Vitaliy Klitschko formed an exploratory team that spent six months researching options for Babi Yar. The result was the establishment of a private foundation to develop the Babi Yar Holocaust Memorial Center (BYHMC).

To bring Klitschko’s original vision to fruition, BYHMC will meet the highest international standards for historical accuracy. According to chief operating officer Yana Barinova, BYHMC will contain content and imagery—including a series of multimedia exhibits—of the highest quality, while a scientific council of Holocaust experts from both Ukraine and abroad is responsible for ensuring the exhibits’ strict historical accuracy.

“We are using the model of the US Holocaust Museum and Yad Vashem [in Israel], where only prominent scholars created the exhibits of these institutions. This way we can ensure the history and overall narrative described by BYHMC is absolutely free from outside political influence of any kind,” explains Barinova.

Ukraine stands to derive enormous benefits from BYHMC. First and foremost, it fulfills a moral imperative to finally recognize Babi Yar’s victims. During the Soviet era, the communists erased any Jewish connection to the site—those killed at Babi Yar were referred to only as “peaceful Soviet citizens”—and Jews who visited the ravine to pray risked arrest. This led Yevgeny Yevtushenko to write his famous poem “Babi Yar” in protest:

No monument stands over Babi Yar.
A steep cliff only, like the rudest headstone.
I am afraid.
Today, I am as old
As the entire Jewish race itself.

BYHMC affords Ukraine the opportunity to rectify these holes in the historical record.

It will also assist Ukraine in its ambitions to join Europe. Many Ukrainian politicians don’t understand how critical the memory of the Holocaust is to Western political, intellectual, and cultural discourse. Creating BYHMC will be a very public demonstration that Ukraine understands that this discussion is required for admission to the West. This will certainly involve coming to grips with some painful realities about the Holocaust in Ukraine. But as Taras Shevchenko National University historian, and BYHMC board member Andrii Rukkas noted, “honest and open conversation, but one that is based on facts and documents, is absolutely necessary.…We can’t live in the atmosphere of half-truth. It’s part of becoming a mature nation.”

Barinova has also explained that BYHMC can become a human rights hub for Eastern Europe in the same way that the US Holocaust Museum has become a focus for human rights issues globally. “So, while our educational program is based on Holocaust-related courses, it also covers the broader fields of human rights, democracy, and tolerance,” she said in a statement last year.

Finally, BYHMC will bring major economic benefits to Ukraine. A world class Holocaust memorial at Babi Yar could attract hundreds of thousands of additional tourists and provide the international exposure Ukraine deserves. And because BYHMC is a public-private partnership—the city of Kyiv provided the land, while the remainder is privately funded—no money for its estimated $120,000 development costs will come from the government’s budget.

To be clear, BYHMC still faces many challenges, not least of which is contempt from those with an axe to grind. Some comments involve sniping from small organizations jealous of BYHMC’s stature and financial stability. Others claim is that it’s a “colonial rather than Ukrainian project,” which ignores the fact that virtually all of the full time staff are Ukrainian, as are many supervisory board and scientific council members.

The most misleading line of attack, however, concerns donors German Khan, Pavel Fuks, and Mikhail Fridman. All three live in Russia, and this has led to claims that it’s a “Russian project” meant to “undermine Ukraine.” This is silly. All three are Ukrainian Jews by background, and all have been involved in other philanthropic projects in the country. Furthermore, Fridman lost eight relatives in the Holocaust in Ukraine and Khan lost thirteen, making the project deeply personal for them. And because donors possess no say about BHYMC’s content, the possibility that they could exercise political agendas is a moot point anyway.

The good news for Ukraine is that BHYMC works closely with numerous government agencies such as the ministries of culture and education, and high-profile politicians are on board, too. In addition to Klitschko, Prime Minister Volodymyr Groisman is a vocal proponent of the project; singer and likely presidential candidate Slava Vakarchuk is a supervisory board member; and President Petro Poroshenko stated in a speech opening BHYMC that he was proud to have played a role initiating the center.

Ukrainians deserve a world class Holocaust memorial at Babi Yar that will make the entire country proud. Thanks to BYHMC, that could finally happen.