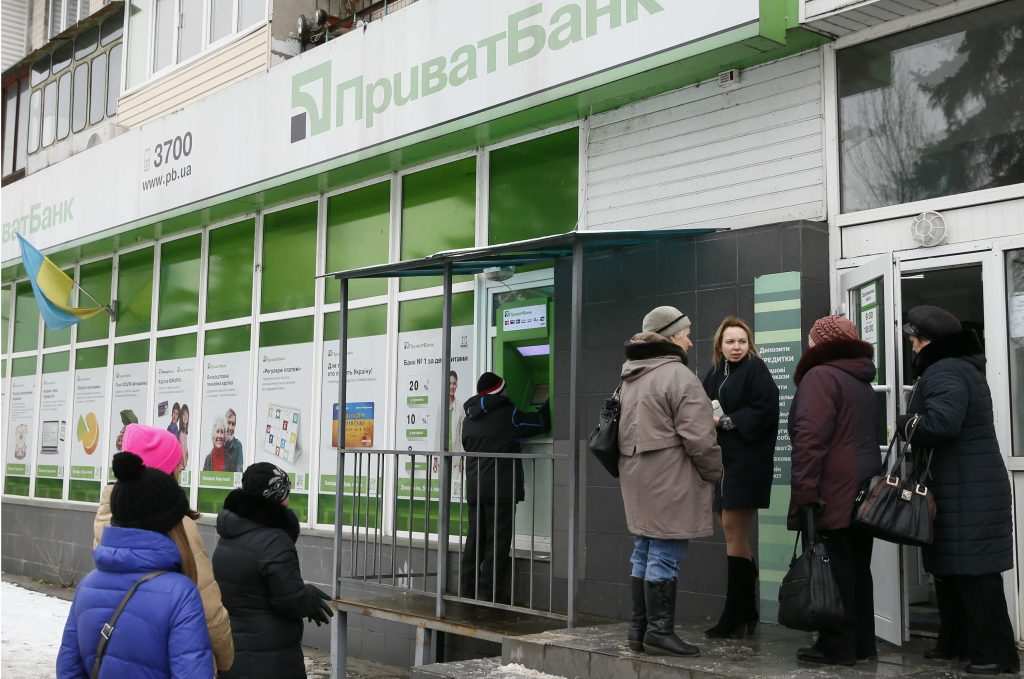 On December 18, the Ukrainian authorities nationalized PrivatBank, the country’s biggest bank. This decision may mark the end of the banking crisis in Ukraine.

PrivatBank accounts for one-fifth of all Ukrainian banking assets and half of payments. It is the dominant bank for small and medium-sized businessmen, but about 70 percent of its lending is related to companies belonging to owners Ihor Kolomoisky and Hennady Bogolyubov and it needs recapitalization.

Dnipro-based PrivatBank was founded in 1992 by Kolomoisky and Bogolyubov, who have consistently been ranked two of the four richest men in Ukraine. PrivatBank has all along been Janus-faced. On the one hand, its banking services and branding have been excellent for retail customers. On the other, it has been owned through off-shore companies and mainly lent to a myriad of varying off-shore companies that have made up the owners’ informal “Privat Group,” a conglomerate of companies involving oil, airlines, food processing, television, and many other activities.

Since 2014, the National Bank of Ukraine (NBU) has closed almost half of Ukraine’s 180 banks, including several banks that were about the tenth biggest. Today, only two of Ukraine’s ten largest commercial banks are privately owned by Ukrainians, namely PrivatBank, and the much smaller First Ukrainian International Bank, which is owned by Rinat Akhmetov. Two of the biggest banks are state-owned, Oshchadbank and Ukreximbank, three are Russian state banks, Alfa Bank is privately owned by former Russian citizens, and the last two are West European banks.

PrivatBank has been a major bone of contention for over two years. The International Monetary Fund has lauded the NBU’s brave bank closures, but it has also demanded that the central bank resolve the problems of recapitalization and related lending of PrivatBank. All along, two options have been discussed, either a peaceful recapitalization or a forced nationalization. In the spring, Kolomoisky and NBU Governor Valeriya Hontareva agreed that PrivatBank would be gradually recapitalized and its related lending reduced over the course of three years.

According to Hontareva, Kolomoisky and Bogolyubov complied with their agreement until the end of September. In early October, however, PrivatBank stopped doing so and effectively declared war on Hontareva and the NBU. Members of parliament started a vicious campaign against Hontareva and the NBU, calling for the ouster of Hontareva and her deputies and the elimination of the central bank’s independence.

Many thought the state was too weak to take over its biggest bank from its second wealthiest businessman. Kolomoisky has recently become chairman of Ukrop, a party sponsored by him, with six deputies in parliament. He also holds sway with the Renaissance Party with twenty-three deputies and People’s Will with twenty-one deputies, thus a total of fifty deputies.

During its last mission to Ukraine, the IMF made the nationalization of PrivatBank an absolute condition for any further IMF lending. The official IMF statement puts it more obliquely: “The authorities’ economic policies should continue to focus on: (v) repairing the financial system and reviving bank lending.”

On December 18, all Ukrainian authorities acted in concert. The Cabinet of Ministers and the National Defense and Security Council decided to nationalize PrivatBank to 100 percent. Hontareva and Finance Minister Oleksandr Danyliuk informed “members of the Cabinet that private shareholders of the PrivatBank had appealed to the Government with a proposal that the Government acting in the interests of the Bank’s clients become its absolute owner.”

But President Petro Poroshenko was the real decision maker. He made a clear statement on the morning of December 19 and did exactly what was needed. Urging the bank’s twenty million clients to “stay calm,” he stated that the state took full responsibility for the bank and guaranteed its clients their money. The measures that the bank’s owners had carried out during the last two years had been insufficient, he said. The new owner is the state in the form of the Ministry of Finance.

The government has acted fast and the right measures seem to have been taken. It has appointed former Minister of Finance Andriy Shlapak temporary chief executive. Danyliuk announced that PrivatBank will be privatized as soon as its situation has stabilized. The Ministry of Finance even issued a video to explain the nationalization. All relevant officials instantly stated their support for the nationalization and that the assets were safe.

International institutions have followed suit. The IMF called the decision “an important step…to safeguard financial stability,” while the European Bank for Reconstruction and Development said it was the “right way forward for Ukraine now.” European Union High Representative for Foreign Policy Federica Mogherini congratulated the Ukrainian authorities on their decision.

It remains to be seen if everything works out, whether PrivatBank continues to function, and whether its related assets are safe, but for now it appears a great victory for economic reform in Ukraine.

Anders Åslund is a senior fellow at the Atlantic Council in Washington and a member of the supervisory board of Bank Credit Dnepr. He tweets @anders_aslund.