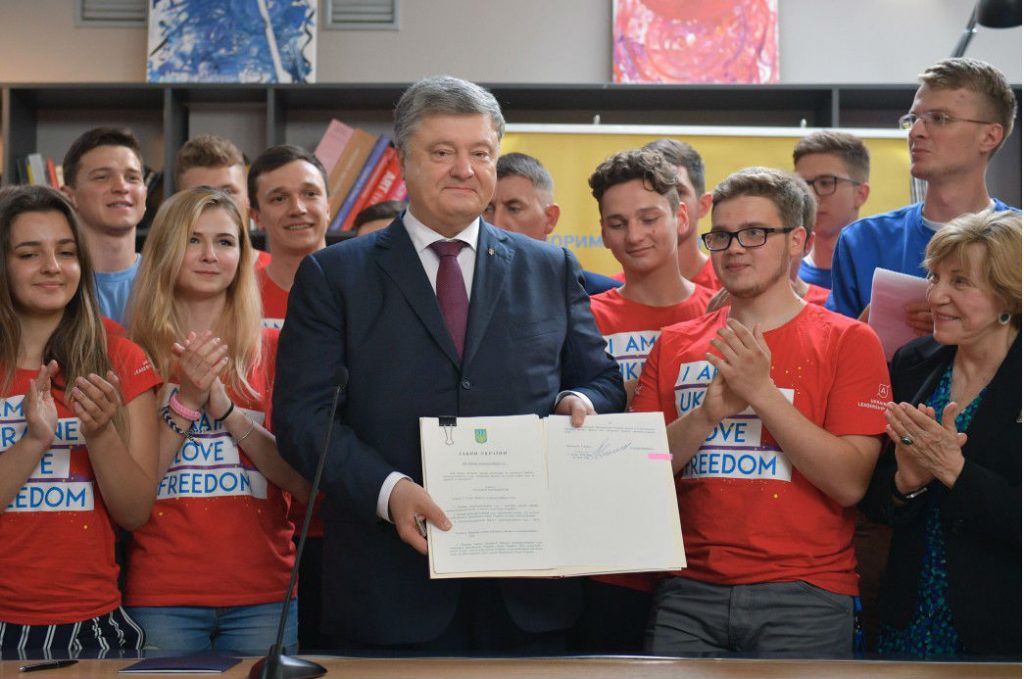 President Petro Poroshenko signs the first of two laws on the Anticorruption Court on June 11 at the Ukrainian Leadership Academy in Kyiv, Ukraine. Credit: Presidential Administration of Ukraine

The legislative work is over, and now it’s time to select judges. These are the people who will become the face of the new institution. Will the Anticorruption Court become an effective and impartial body? Everything depends on who is appointed to the bench. The new court needs thirty-nine judges.

Civil society and the international community will monitor every step of the selection process, which is led by the High Qualification Commission of Judges of Ukraine (HQCJ), to ensure that any possible manipulations are avoided.

What are the next steps?

First, it is essential to motivate as many judicial candidates as possible to apply. The application period began on August 8 and closes on September 14. After a candidate applies, the HQCJ verifies a candidate’s information and determines if a candidate is admissible.

Second, candidates undergo an evaluation which consists of two stages: an exam, and an analysis of dossiers and interview. This is the stage where the Public Council of International Experts steps into to evaluate a candidate’s integrity.

Third, the HQCJ ranks candidates and sends its recommendations to the High Council of Justice (HCJ). The HCJ reviews the list and submits them to President Poroshenko, who then appoints the judges.

Who are the potential candidates?

It’s fair to say that the more legal practitioners, scholars, and honest judges who take part in the competition, the better the result. In fact, Transparency International-Ukraine is traveling throughout Ukraine to encourage qualified candidates to consider applying.

The international community will play a role in the selection process. The Public Council of International Experts decides whether a candidate complies with the integrity criteria. During the process to rebuild the Supreme Court, the HQCJ did not take into account the majority of the negative conclusions on particular candidates that civil society through the Public Integrity Council had reached, which is why the Public Council of International Experts will participate in the selection procedure and its role is different.

The Public Council of International Experts will be made up of six members. The new law asks international organizations (including the World Bank, Interpol, Eurojust, Europol, OSCE, OECD, United Nations Office on Drugs and Crime, GRECO) to nominate at least two candidates for each position. It is important that the international community agrees upon a united list of candidates from which the High Qualification Commission of Judges may then select.

The new law is good, but it has some drawbacks. Public Council of International Experts members will be given only thirty days to analyze candidates’ information. Moreover, if they do not initiate a joint panel with HQCJ regarding candidates that fail to comply with the integrity criteria within this time limit, a candidate will automatically pass. Therefore, civil society and the international community should work in close cooperation to make sure that the Public Council of International Experts can respond quickly. Civil society should provide staff to help international experts analyze the candidates.

After all, Ukraine’s civil society and the international community want the same thing: an independent, impartial, and effective anticorruption court. Ukraine’s new court may add a great deal to the fight against corruption and may show other countries how to tackle grand corruption cases. The birth of the anticorruption judiciary has not been an easy one, yet it may lead to amazing results if done correctly.

Maksym Kostetskyi is the legal adviser at Transparency International in Kyiv, Ukraine.