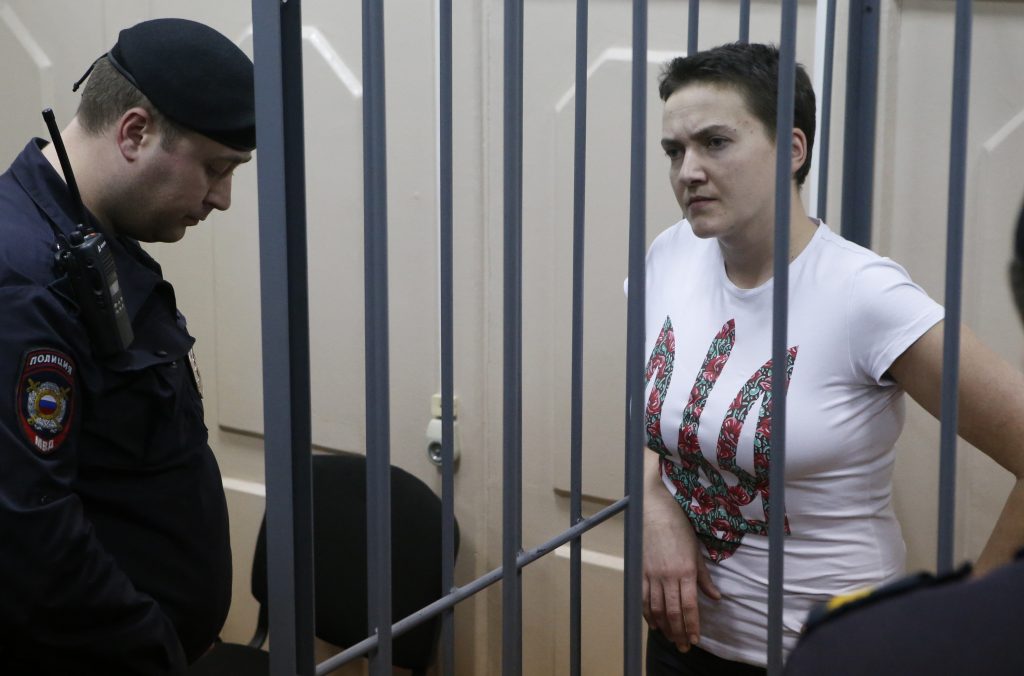 In seven months since a Russian-backed militia in southeastern Ukraine captured Nadiya Savchenko, the Ukrainian paratrooper and pilot has become one of her country’s biggest icons in its war against the Russian invasion. Her captors spirited her illegally into Russia, held her in isolation, then accused her of helping to kill Russian journalists. At home, Savchenko, already celebrated as Ukraine’s first female military pilot, was nominated and elected to parliament, an office she accepted from her Moscow prison cell.

Now Savchenko, 34, has raised the ante against her captors with a hunger strike that has lasted more than a month. Drinking only tea and water, she has lost more than twenty-six pounds. “I’m hunger-striking to try to force some common sense from the Russian government and some conscience from the Investigative Committee [the prosecuting agency],” Savchenko told the Russian human rights activist and journalist Zoya Svyetova this month. Her captors have put her into an isolation cell and in recent days began administering her glucose intravenously.

Effectively, Savchenko has been running a one-woman information war against the Russian government of President Vladimir Putin over what she and numerous legal sources call her illegal detention and fabricated criminal charges against her. “They cannot break my spirit,” she wrote in a January 12 open letter she handed to her lawyers, whom the Russian authorities allowed to see her. “A person who was born free, and not a slave in captivity, cannot live in prison—especially if he or she is innocent.” [See the full text of her letter, below.]

Savchenko’s campaign has won support from the Obama administration, other foreign governments, human rights organizations, European pro-democracy groups, and thousands of Internet petitioners worldwide. Her defiance of her captors was reinforced this week by Ukraine’s parliament, the Verkhovna Rada, which appealed to European leaders to step up political pressures on Russia to release her.

For many Ukrainians, Savchenko’s ordeal at the Kremlin’s hands encapsulates that of their country. (Batkivshchyna via Twitter)

Savchenko was something of a celebrity in Ukraine before the war began, because of her crusade to win the right to become the country’s first female military pilot. She first enlisted in the army and qualified as a paratrooper, then served with the country’s contingent in the Iraq war. Then she used her combat credentials to force the national Air Force University to train her as a pilot and navigator.

When Russia used its troops and mercenaries last year to foment a separatist war in the southeastern region of Donbas, Savchenko took a leave of absence from her Air Force duties to use her combat experience in one of the country’s new, volunteer, National Guard battalions. Russian-backed separatists captured her near Luhansk in June and filmed her in their custody in Ukraine.

Weeks later, Savchenko disappeared—shackled and abducted across the border into the custody of the Russian state. When Russia announced her arrest in its territory, it declared that she had fled to Russia to seek asylum—a notion that has been ridiculed even in the country’s own social media.

Russian prosecutors say they can prove that Savchenko called in a mortar attack on a road intersection that killed two journalists for a Russian state-run TV station. It has cited as evidence anonymous statements by what it says were fighters of a Russian-supported militia in the area, and an interrogation of a wounded Ukrainian soldier who says he was under duress and disoriented with pain.

Savchenko’s defense attorneys cite data from her cellphone showing that she made no calls, was not in the area of the attack, and had been captured by the Russian-backed militia one to two hours before the explosion that killed the reporters.

In violation of Russia’s own laws, authorities held Savchenko incommunicado after her abduction across the border, and interrogated her without permitting her the presence of a lawyer. For weeks, it refused nine requests from the Ukrainian government before allowing its consular officer to see her. It has barred her from receiving books, letters and visitors. (Svyetova, the human rights activist, was able to reach her because she is a member of an official prison oversight commission.)

Prison authorities have harassed her defense attorney, Mark Feygin. A court forced Savchenko to undergo “psychiatric evaluation” at Moscow’s Serbsky Center, a mental hospital that has been used to “treat” political dissidents.

Throughout her ordeal, Savchenko has won admirers with a remarkable calm—whether shackled and under interrogation by her initial captors, or in court in Moscow. One of Ukraine’s main political parties, the Batkivshchyna (Fatherland) Party of former Prime Minister Yuliya Tymoshenko, named Savchenko at the top of its parliamentary ticket. Her face appeared on billboards around Ukraine that urged her compatriots “Don’t give up! Ukraine can prevail!”

Ukraine’s parliament gave a standing ovation to news that Savchenko had signed her oath of office, carried to her prison cell by her lawyer. (In doing so, she resigned her military commission.) The Rada chose her as one of its delegates to the Council of Europe’s parliamentary assembly—and last week urged Europe’s governments to step up pressure on the Kremlin to release her.

Amid it all, Savchenko told Svyetova, one of her main worries is the Russian authorities’ refusal to allow her phone calls or visits from her younger sister, Vira, who has been perhaps the most ardent campaigner for Nadiya’s release. Nadiya lamented that she had not been allowed to call Vira (their names translate, respectively, as “Hope” and “Faith”) to wish her a happy birthday on January 12. The next day, Vira sat in the parliament gallery to watch Ukraine’s legislature pass the resolution she had sought asking Europe’s help in freeing her sister.

Here is a translated text of Savchenko’s January 12 open letter to her supporters, which she transmitted through her lawyers:

To all those concerned about my fate

A heartfelt thank you for your support. Believe me, I feel it despite the fact that the Russian Investigative Committee has deprived me of the right to correspondence. I have not received a single letter for two months and so I can’t answer you. I’m saying thank you now, therefore, to all those who have written to me or simply remembered me with a kind word.  That has filled me with strength.

Now about the hunger strike. I know that very many people at all levels in Ukraine and throughout the world are doing a lot to secure my release and I am very grateful to them.

I never anticipated such support because both in Ukraine and in the whole world right now there are plenty of problems besides mine…. I am very aware of your concern and feel ashamed that from prison I myself can do almost nothing.  I have therefore decided to fight in the only way available to me – through hunger strike.

But I don’t want you to worry too much about me. Thank God, as well as thanks to my genetic code and my parents, I have the health of an astronaut and will endure. And the part you are playing in my fate will help me in that. Every person who even once a day just thinks good things about me will give me faith and strength, while each who thinks badly will add to my determination and anger!

Yuliya Tymoshenko wrote me a letter in which she asks me to suspend my hunger strike and preserve my strength since “the enemy needs us to be weak”.  These are very wise words. Thank you, Yuliya Volodymyrovna.

But I want to reassure you that I have never been weak and never will be! They cannot break my spirit, and I’m not going to get into battle with the prison guards!  The main thing is to hold out in spirit, and my physical strength will recover. .. And if God has need for something else, then so be it … the loss of one fighter is a very great loss, but it is in no way a lost war!  Ukraine will win!”

Well, a person who was born free and not a slave in captivity, cannot live in prison. Especially if he or she is innocent.

Through my protest – my hunger strike – I wish to achieve common sense from the Russian authorities and an awakening of conscience from the Russian Investigative Committee. There is irrefutable evidence of my lack of involvement and innocence of the crimes they accuse me of.  What else do they need?

I have taken the decision to go on hunger strike myself and nobody pushed me into it. I have given my word that “Until the day I return to Ukraine, or until the last day of my life in Russia!” and I will not back down, otherwise what value would my words have?!

I will get through!  Thank you for believing in me!

Image: Nadiya Savchenko wore a t-shirt with the Ukrainian trident, a national emblem, as she listened to a Moscow court hearing in November, guarded in a cage by Russian policemen. Savchenko began a hunger strike in prison in December. (Reuters/ Sergei Karpukhin)