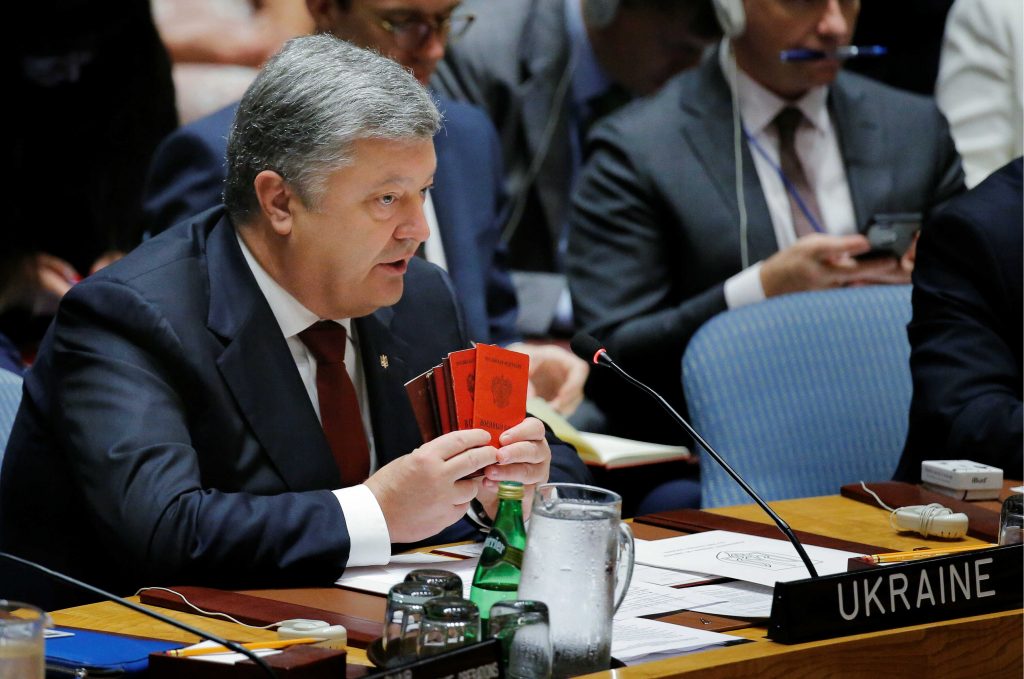 Ukrainian President Petro Poroshenko holds up documents which he says belong to Russian military personnel serving in Ukraine during a meeting of the Security Council to discuss peacekeeping operations during the 72nd United Nations General Assembly at UN headquarters in New York, September 20, 2017. REUTERS/Lucas Jackson

These early autumn days are still hot—particularly for the upper crust of the diplomatic world attending the United Nations General Assembly’s 72nd session. Much remains at stake.

In particular, Ukraine will once again be requesting UN peacekeeping missions and other assistance from the United Nations to help bring the conflict in the east to a close. But once again, diplomats from around the world will be forced to choose between an ordinary country at the edge of Europe and the bullying giant that is Russia. It’s time for the international community to deprive Russia, as the aggressor state, of the right of a United Nations Security Council veto concerning the situation in Ukraine.

Ukraine, a nation of 42 million people, is struggling to defend its people, its sovereignty, and its territorial integrity. The country has lost 10,000 lives and nearly 10 percent of its territory due to the ongoing war in the eastern industrial Donbas region. The Kremlin’s aggression against Ukraine almost crippled the nation’s economy, limiting the impact of the political and trade association agreement with European Union. We lost 16 percent in gross domestic product due to the invasion, and the return to growth is slow.

Despite truces and ceasefires, Ukraine is still losing soldiers on a weekly basis who are defending our eastern borders. Civilians are unsafe and impoverished in a conflict that has already displaced 1.6 million of them.

I came to politics on the wave of the Revolution of Dignity, which ousted a corrupt and authoritarian dictator and kickstarted the first truly deep reforms in our independent history. The Russian military invasion that followed—beginning with the seizure of Crimea—has changed our lives forever. This war has been described as undeclared and hybrid, making it extremely challenging to adjust to the new realities. Areas such as the military, energy, diplomacy, media, history, economy, and religion are used as weapons now.

Therefore, the global response should be sufficiently robust as well. What is needed is a mix of sanctions, diplomatic pressure, anti-propaganda, and awareness-raising campaigns—a combination of conventional and asymmetrical actions.

A UN peacekeeping mission, under a clear mandate and properly sourced, can be an effective measure to contain both the existing humanitarian catastrophe and the Kremlin’s abuse of previous peace efforts. Such a mission can be a turning point that would finally establish favorable conditions for a peaceful solution.

As a result, since 2015, the Ukrainian parliament has been appealing to the UN Security Council to deploy peacekeeping missions across the temporarily occupied territory.

Ukraine is a founding member of the UN. Over 34,000 Ukrainian “blue helmets” participated in more than twenty operations under the auspices of the UN, bringing peace and security to war-torn countries such as Afghanistan, Bosnia and Herzegovina, Croatia, and Georgia.

Our territory was a battlefield against Nazi Germany’s evil, when we mourned over 2.5 million military and 4.5 million civilian deaths. Throughout history, Ukraine has clearly demonstrated its complete dedication when it comes to international peace and stability. Today, we call for the world’s help.

Recently, Russia initiated a UN Security Council resolution to deploy peacekeepers only along the contact line. This is likely aimed to solidify the line’s status as the new de facto border between Ukrainian-controlled territory and Russian-controlled territory in the Donbas. Fortunately, the Security Council reportedly did not accept this approach, as it would inevitably create a frozen war zone.

But since 2015, Russia has repeatedly vetoed previous draft resolutions aimed at a peaceful settlement of the Donbas conflict. So why would Russia change its policy now and agree to expand the proposed UN mission mandate all across the occupied Donbas? What is behind this sudden willingness to compromise? Whatever the cause, this new response is reason enough to be suspicious of Russia’s intentions.

The Ukrainian draft resolution envisions peacekeepers that are deployed throughout the whole area controlled by Russia forces, stretching from the current frontline to the internationally-recognized Ukraine-Russia border. Such a UN mission should have a broad, consistent mandate for establishing peace and security throughout the occupied territory in Ukraine. The “blue helmets” can play a key role in cutting the influx of weapons, ammunition, and troop reinforcements from Russia, eventually creating the necessary conditions for a peaceful de-occupation of the Donbas.

It is most likely that Russian representatives will veto such a resolution, as they vetoed a resolution on the illegal annexation of Crimea. Therefore, according to article twenty-seven, chapter five of the UN Charter, a party to a dispute shall abstain from voting within the Security Council; this means that the Security Council should suspend Russia, as the aggressor state, from voting on Ukrainian peacekeeping operations.

German Chancellor Angela Merkel has continuously emphasized that sanctions on Russia will only be lifted once Moscow agrees to end the conflict in Ukraine. Meanwhile, the G7 leaders expressed a common statement that the economic sanctions on Russia should stay in place until the country halts the aggression in eastern Ukraine. This explicit position restricts Russia’s options and gives a clear vision of potential outcomes if Russia’s policy does not change.

Awareness, strong values, and responsibility should be the core guidelines of the democratic world today. The fundamental UN charter principles of sovereignty, territorial integrity, and the independence of all states, including Ukraine, must be observed—observed, protected, and if necessary, enforced.

The Ukrainian request to the UN for a peacekeeping mission is one of the preconditions to launch a comprehensive conflict resolution process, but not to make another grey zone on the world map. This measure in conjunction with acquiring NATO special partner status and the realization of a New European Plan for Ukraine (the so-called “Marshall Plan for Ukraine”) to restore the Ukrainian economy aim to strengthen peace and stability in Ukraine and the broader region, and are the right next steps.

Nataliya Katser-Buchkovska is a member of the Ukrainian parliament, where she serves as the head of the Subcommittee on Sustainable Development, Strategy, and Investments within the Committee on Energy, Nuclear Policy, and Security.