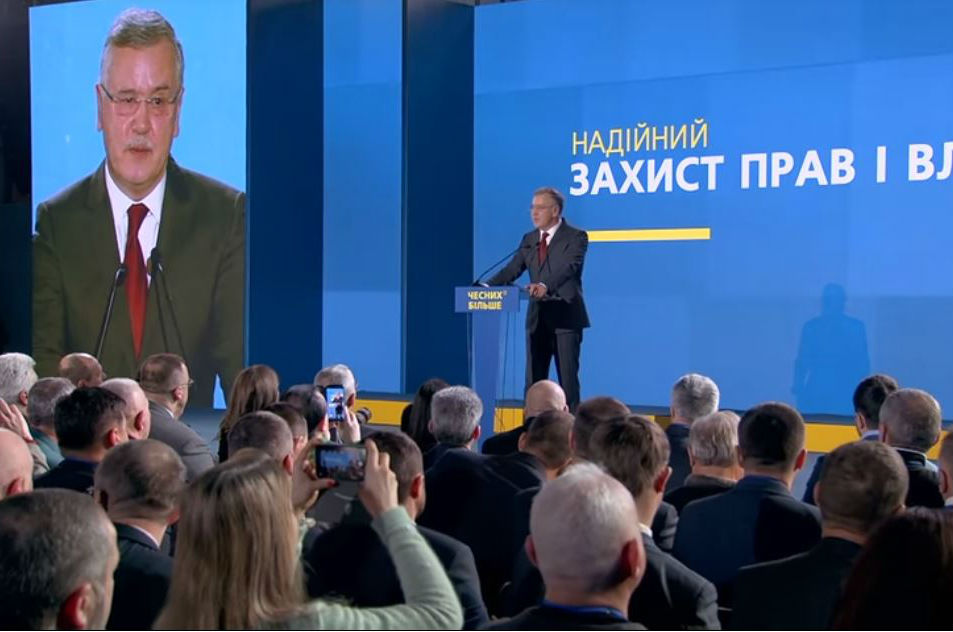 Ukraine’s anti-oligarchic forces have finally started the process of forming a broad pro-reform coalition in advance of the 2019 presidential and parliamentary elections. On January 11, a congress of various reformist groups announced its support for the presidential candidacy of former Minister of Defense Anatoliy Hrytsenko. While the meeting was largely an event of Hrytsenko’s Civic Position party, it included a number of small parties and civil movements which backed Hrytsenko as well. In addition, a number of prominent MPs from the well-known “Euro-Optimists” inter-factional group in parliament, including Svitlana Zalishchuk, Serhiy Leshchenko, and Mustafa Nayem, joined the congress.

Nayem called for a broader coalition of pro-reform politicians to work together, urging Lviv Mayor Andriy Sadovyi and the lead singer of the popular band “Okean Elzy” Sviatoslav Vakarchuk to back Hrytsenko. Nayem also touched upon the crucial question of the entire enterprise: Will the new alliance eventually become broad enough to exert real political influence?

For a number of reasons, the new alliance has more political meaning and practical significance for the fall parliamentary elections than for the spring presidential ones. This has to do with Hrytsenko’s low chances of becoming president and the constitutional division of power in Ukraine.

To be sure, Hrytsenko would, perhaps, be the ideal choice for president, from among the candidates currently on offer. National defense, state security, and foreign affairs are the main prerogatives of the presidency, while social and economic matters are largely in the hands of the prime minister who is elected by parliament. A former military officer and experienced politician, Hrytsenko would be especially well-prepared for the presidential post.

Moreover, his Civic Position party has official observer status with the European Parliament’s liberal ALDE group. His team includes a number of internationally well-connected politicians who could help him deepen Ukraine’s relations with the West. Hrytsenko is one of the few known politicians with an untainted reputation and image of a resolute anti-corruption fighter. He and his team would be welcome as Ukraine’s new leaders in the EU and US.

But the odds of him winning are slim. Ukraine’s presidential elections will be, to a considerable degree, decided by the amount of money each candidate can invest, and here, Hrytsenko is at a disadvantage. He cannot count on much support from Ukraine’s oligarchs, as he is unwilling to offer anything in exchange. Even if he manages to enter the second round of the presidential elections in April 2019, Ukraine’s oligarchs would then mobilize against him.

Still, his candidacy and the rallying of reputable anti-corruption forces around Hrytsenko and Civic Position are important for Ukraine and its integration with the West. The unification process offers a chance to create an appealing list and powerful force for the October 2019 parliamentary elections. In 2014, Hrytsenko’s Civic Position formed a coalition with the small but reputed Democratic Alliance party. Yet, this political couple eventually proved too weak to pass the 5 percent threshold and did not enter parliament. One hopes that this year’s attempt will be different, and that the new alliance will be far broader.

If Civic Position enters parliament, the new Rada would gain an important player which could be relied on to push through economic as well as judicial reforms, implement the Association Agreement with the EU, and further advance Ukraine’s ongoing decentralization. A strong showing of Hrytsenko’s list might mean that it would be included in Ukraine’s new coalition government, as the next government is likely to be made up of a number of political parties. Hrytsenko as well as well-respected veteran politicians such as Viktor Chumak, director of the respected Institute for Public Policy, Mykola Tomenko, a political scientist and former vice prime minister, or Taras Stetskiv, one of the founding members of the late Soviet Rukh movement, might obtain ministerial portfolios or other relevant positions within Ukraine’s legislature and executive, if the party performs well in October.

But it will not be easy. Ukraine’s pro-democratic forces will have to further coalesce and consolidate to make this a reality. The field of parliamentary contenders will likely be crowded. The three leading presidential candidates, Yulia Tymoshenko, Petro Poroshenko, and Volodymyr Zelenskiy, will propose their lists and invest considerable resources. In addition, Oleh Liashko’s notoriously populist Radical Party, far right groups, and at least one successor organization of the Party of Regions will make serious bids in the Rada elections. As a result, there may not be enough political space and urban educated voters for even two pro-democratic anti-corruption groups to make it into the parliament. In a worst-case scenario, two or more similar parties could divide Ukraine’s anti-oligarchic electorate, thereby depriving all radical reform parties of a parliamentary faction.

Euromaidan groups will have to show political wisdom, electoral pragmatism, and strategic foresight in order to make it jointly over the 5 percent hump in October. On the one hand, Hrytsenko and his team will have to be inviting, tolerant, and generous when forming a list with others. On the other hand, other players will need to be realistic, modest, and oriented toward the common good. The infamous proverb, “When two Ukrainians get together, there will be three hetmans (chieftains),” is an apt warning.

The West has a role to play, too. Many reform leaders frequent Western embassies and capitals. Ukraine’s European and American partners should tell their friends in Kyiv, Lviv, and other places that they need to act constructively. Those who break out of the currently shaping alliance and decide to make their own competing bids, or who behave unhelpfully within a broadening coalition should be warned that they may face consequences for any divisive conduct.

Official sanctions are too much. But Western diplomats, activists, and politicians can make clear that invitations to embassy receptions in Kyiv, and political gatherings in EU capitals, and other benefits will occur less frequently for those who are splitting the pro-reform vote, hindering political alliance formation, and thus weakening the anti-oligarchic forces in Ukraine’s future parliament. The stakes are high in Ukraine’s upcoming elections, and so too should Western attention be.

Andreas Umland is a senior non-resident fellow at the Institute of International Relations in Prague, principal researcher at the Institute for Euro-Atlantic Cooperation in Kyiv, and general editor of the book series “Soviet and Post-Soviet Politics and Society” distributed by Columbia University Press.