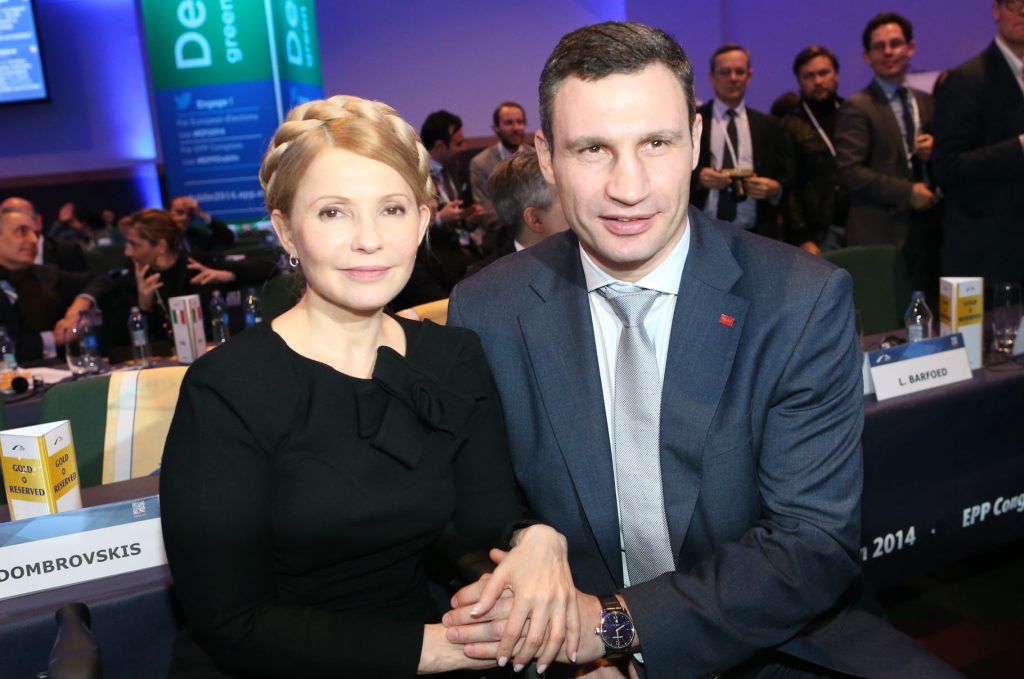 Kyiv Mayor Vitaly Klitchko’s re-election will be far tougher than his election last year. Klitchko won a majority in May 2014 following an election deal with Petro Poroshenko. The deal brought Poroshenko and Klitchko to power and blocked former Prime Minister Yulia Tymoshenko from making a comeback. But Tymoshenko may challenge Klitchko this fall. Tymoshenko’s Motherland Party is popular in Kyiv, although it has never won a mayoral election. Credit: European People's Party

With less than 80 days before election day in Ukraine, mayoral races are already heating up. Parliament approved a new election law that does two things: Ukraine will use an open-list system and the country will hold runoffs for mayors in larger cities. These two features combined with the potential decentralization reforms being debated by parliament make the October 25 local elections more important than previous ones.

The Communist Party and Right Sector won’t participate in the elections. On July 24 the courts banned the Communist Party of Ukraine. There were concerns that the bad economy might persuade older voters to vote red, sending obstinate representatives to local councils who would block reforms. Right Sector announced that it will not participate in the elections, focusing instead on a nationwide referendum.

The new election law has a number of drawbacks, and there is no organized effort to educate voters about the new open-list system. The new system means that voters will select a party and then select their candidate from the party list. Those parties that receive five percent will receive seats on the local councils and the seats will be distributed based on the voters’ selections within the party list—rather than a closed-list system where the party bosses predetermine the order on the list. The change will dramatically delay the vote counting process. Historically, final tallies have been intentionally delayed long enough for international and domestic observers to go home, and then the commissioners have a free hand to produce the results they desire. The most undemocratic provision of the new law prohibits candidates from running as independents and bans blocs where multiple parties unite into a single list. It also bans internally displaced persons—more than 1.38 million people—from voting.

Despite its drawbacks, the law mandates that at least 30 percent of each list include candidates of different gender. In practical terms, at least three of every ten candidates on a party’s list must be women.

In cities with more than 90,000 people, if no candidate receives 50 percent plus one vote, the law requires a runoff for the top two vote getters. Forty-seven cities meet that criteria and given Ukraine’s divided electoral history, 80 percent of those cities will likely have runoffs. The runoff requirement forces candidates to build coalitions and make compromises. If pro-European candidates were allowed to run as independents or in blocs, they would have a better chance of winning in the east and south. In Odesa for example, Eduard Hurvits’ rating is much higher than any of the parties in the government coalition (Poroshenko bloc, People’s Front, Samopomich, etc). If Hurvits was allowed to run as an independent, he would be likely to receive more votes than under a party label.

While registration doesn’t close until the end of September, these four races are worth watching:

1. Kyiv—Vitaly Klitchko’s re-election will be far tougher than his election last year. Mayor Klitchko won a majority in May 2014 following an election deal with Petro Poroshenko which united the two men’s parties into a single bloc. The deal brought Poroshenko and Klitchko to power and blocked Yulia Tymoshenko from making a comeback. But Tymoshenko may challenge Klitchko this fall. Tymoshenko’s Motherland Party is popular in Kyiv, although it has never won a mayoral election. Tymoshenko’s recent populist rhetoric has helped double her numbers, from five percent in October 2014 to more than 10 percent today. While mayor of Kyiv may seem like a step down, it would give her a nationwide office going into the next election. She’d also be trading up: Mayor of Kyiv is more prestigious post than the leader of a small, junior coalition partner in parliament. The risk for Tymoshenko is that if she loses, it is likely the final nail in her political coffin. Voters have taken an increasingly negative view of her and despite her recent populist surge, her unfavorable rating remains above 50 percent.

Klitchko has adjusted to the demands of running a big city. He received praise for convincing the Euromaidan protestors to close the camp. While he has made some positive strides in e-governance and modernizing the city’s operations, his team has not effectively communicating those successes to voters. Consequently, his popularity has declined.

Ihor Shevchenko and Gennadiy Korban may enter the race. Shevchenko, recently sacked as Ecology Minister by parliament, may face a criminal investigation over his conduct at the Ministry. But that has not prevented Shevchenko from purchasing billboards urging lustration. After his loss in the Special Parliamentary Election in Chernihiv last month, Gennadiy Korban was nominated as Ukrop’s mayoral candidate for Kyiv. While both Shevchenko and Korban have deep pockets to compete, neither has any real support in Kyiv. Restaurateur Sergiy Gusovskiy is also considering a race as Samopomich’s candidate. He currently serves on the city council and is a rising star.

2. Odesa—Incumbent Mayor Gennadiy Trukhanov faces a rematch with three time former Mayor Eduard Hurvits. The two squared off last May and despite an exit poll showing Hurvits leading by seven percent, Trukhanov was declared the winner.

Hurvits, 67, ran a poor campaign in 2014 and underestimated Trukhanov’s tenacity. Trukhanov, a former Regions Party MP, is closely linked to the mafia. However, Trukhanov has navigated a careful, independent course as mayor in an effort to avoid angering Kyiv and to placate Odesa’s Governor Mikhail Saakashvili. With a quarter of Odesa’s electorate ethnically Russian, Trukhanov maintains an adequate base of support. Another key factor in Trukhanov’s victory over Hurvits last May was the financial backing of oligarch Ihor Kolomoyskyi. Before politics, Trukhanov was Deputy Head of the Odesa Port and is a close associate of Kolomoyskyi.

Hurvits was elected as Odesa’s first democratic mayor in 1994 and earned a reputation as a reformer and effective manager. He was re-elected in 1998, only to be de-registered by a court order. Hurvits then survived three assassination attempts and saw two of his assistants disappear. Nonetheless, Hurvits placed second in a fraudulent 2002 poll. However in May 2005, a court ruling declared the results invalid and Hurvits the rightful winner. Hurvits was easily re-elected in 2006 and served until 2010 after losing in a controversial election that lacked transparency.

Trukhanov leads slightly in the polls. If Saakashvili is able to use the administrative apparatus to ensure a fair election, Hurvits will likely come out on top.

3. Kharkiv—Controversial Mayor Gennadiy Kernes is in the driver’s seat for re-election. His flirtation with separatism, pending criminal charges for his role in pressuring Euromaidan activists, and survival of an assassin’s bullet all seem to add to his allure. A recent poll put him at 64 percent against a scattered field of single-digit opponents. Though his 2010 victory over Arsen Avakov was narrow, Kernes has consolidated his support within the business community and the city’s pro-Russian population. Governor Igor Raynin wants oblast deputy Oleksandr Davtyan to challenge Kernes, but barring something unforeseen, he will be a sacrificial lamb. Perhaps the only real intrigue is which party Kernes will run on.

4. Lviv—Incumbent Andriy Sadoviy will seek a third term as Lviv’s mayor. Unlike his re-election in 2010, Sadoviy is now a national figure who wields influence in parliament through his Samopomich faction. Conversely, some voters feel that Sadoviy is distracted by politics in Kyiv and no longer an effective mayor. His most likely opponent is Poroshenko-backed MP Oksana Yurinets, who crushed her People’s Front opponent by a 42 to 20 margin in the 2014 elections. Svoboda is also likely to field a candidate against Sadoviy since the mayor has been a fierce rival.