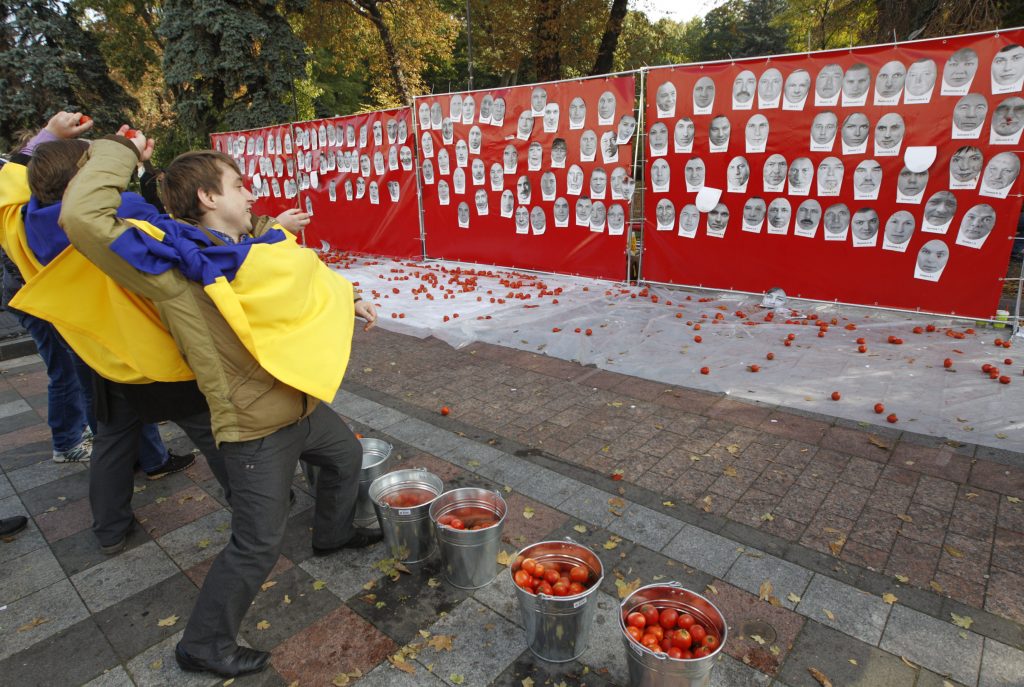 The Ukrainian campaign to actually begin cleaning up Europe’s most corrupt government and economy is progressing more slowly than many Ukrainians have demanded. But the past week showed some movement in two critical government agencies: the prosecutor general’s office and the nascent National Anti-Corruption Bureau.

The arrest of Oleksander Yefremov, a billionaire and former leader of Yanukovych’s political machine, the Party of Regions, was short-lived. After a Kyiv court ordered Yefremov held on bail of 3.6 million hryvnia (about $135,000), the magnate posted the money yesterday and was released. Shokin pledged to take Yefremov to trial on charges, announced last summer, that he coerced a state-owned coal company in his home province, Lugansk, to buy services at inflated prices from companies controlled by his family.

In a country where such business oligarchs have seized the heights of economic and political power during Ukraine’s twenty-three years of post-Soviet independence, a successful prosecution of Yefremov would be symbolically potent. It would show Poroshenko’s intent to do battle with at least the more politically vulnerable oligarchs, notably those who most closely allied with the ousted Yanukovych (who include Rinat Akhmetov and Dmytro Firtash). It would remain less clear how closely Poroshenko (himself a business magnate) might scrutinize more politically secure oligarchs, such as banking billionaire Ihor Kolomoisky, who is one of the country’s most powerful men. Kolomoisky serves as governor of the strategic province of Dnipropetrovsk and has a significant bloc of supporters in the parliament.

Shokin also won headlines this week for firing several top officials in his office, which directs state prosecutions, much like the US attorney general’s office. He named a former deputy prosecutor general of Georgia, Davit Sakvarelidze, to supervise reforms in Ukraine’s prosecutorial system. Sakvarelidze, in his early thirties, holds degrees from Georgian, US and Japanese universities and is the latest of several foreign technocrats given an assignment to push politically sensitive reforms in Kyiv. President Petro Poroshenko last week named former Georgian President Mikheil Saakashvili to head an advisory council on Ukraine’s reform efforts.

Sakvarelidze told reporters February 17 that a special unit of prosecutors will be formed to help the National Anti-Corruption Bureau pursue its cases.

Shokin, a 63-year-old veteran of the prosecutorial system, has faced criticism that he, also, is too connected to Ukraine’s past regime. His shakeup of the office may have been meant at least in part to help Shokin distinguish himself from his predecessor Vitaliy Yarema, under whom he served as a deputy. Public pressure built for Yarema’s dismissal over his failure to bring Yanukovych-era officials to trial—notably those involved in the police sniper attacks a year ago that killed dozens of the massed pro-democracy demonstrators at Kyiv’s Maidan Nezalezhnosti.

But Yarema told the Wall Street Journal this month that that failure was due to a broader lack of political will in the government, and miserly salaries authorized by parliament for prosecutors. Yarema had clashed publicly with Kolomoisky, the Dnipropetrovsk oligarch and political baron, over the selection of a prosecutor in that province, and Kolomoisky’s loyalists in parliament were among those urging Yarema’s dismissal.

Ukraine’s main project to clean up government, and one required by its agreement last year for loans from the International Monetary Fund, is the opening of a National Anti-Corruption Bureau. This new office was both strengthened and weakened February 12 by the parliament, or Verkhovna Rada. Independent anti-corruption activists had pressed the Rada to let a nine-person selection commission (which has won public approval for its roster of respected professionals) establish greater independence for the Bureau by formally appointing its director. But lawmakers passed a provision that the commission must forward names of three candidates to the president, who will choose one.

The new law buttressed the prospective bureau by raising the minimum salaries for its staff and by mandating an external, annual audit of its work, according to the independent, non-government Anti-Corruption Action Center.  But it also introduced a provision for the president or parliament to dismiss the bureau’s director if the auditors—one each appointed by the president, the cabinet and the parliament—issue a “negative” report, the center said. In so doing, “It is likely that [a] prime minister and a president of Ukraine [can now] secure themselves” and their teams “from possible investigations” by the Anti-Corruption Bureau, said Vitaliy Shabunin, the anti-corruption center’s board chairman.

Pro-democracy and anti-corruption activists have described the evolution of the National Anti-Corruption Bureau as an imperfect step forward that they hope to improve upon in future legislation. The civil society campaign that emerged from last year’s Maidan movement aims to re-introduce legislation in the coming year to reinforce the Bureau’s independence.

For now, the focus is on getting a director appointed so the bureau can begin active work. The job announcement was posted last month on the presidential website, and the nine-person selection commission now has more than 170 applications to consider, Ukrainian news media report. Meetings of the commission are being broadcast online.

There has been debate in Kyiv about having a foreigner direct the Bureau. One of the selection commission members, journalist Yuriy Butusov, has suggested appointing Saakashvili. But the published rules say foreigners say foreigners would have to obtain Ukrainian citizenship, which under Ukrainian law requires a person to surrender his or her previous citizenship. Saakashvili said in an interview with New Eastern Europe that he won’t surrender his Georgian nationality. A former assistant US attorney from New Jersey, Bohdan Vitvitsky, was discussed for the job until the government’s requirements set a maximum age of 65, which he has surpassed.

Another commission member—the director of the Kharkiv Human Rights Protection Group, Yevhen Zakharov—has said on his Facebook page that he expects the panel to choose its three candidates for submission to Poroshenko no earlier than March 6. That would come as welcome news to many Ukrainians. A year after the ouster of the Yanukovych government, opinion polls and other indicators find Ukrainians impatient to see the start of the real war on corruption in their country.

They may need a little more patience, according to Shabunin, the anti-corruption activist. Realistically, he said, the Bureau might start its investigations only in summer and bring its first cases to courts around the fall of this year.

Olena Tregub is a political reporter in Kyiv. She is a contributor to the Reform Watch project at the Kyiv Post, which analyses Ukraine’s post-Maidan transformation.

Image: Anti-Corruption protesters outside Ukraine’s parliament throw tomatoes at photos of legislators who were absent for a key vote on anti-corruption laws in October. Public opinion surveys have underscored that one of the most potent popular demands of the government is to halt the country’s rampant official corruption. (Reuters/Valentyn Ogirenko)